WHERE THE HOLES ARE... 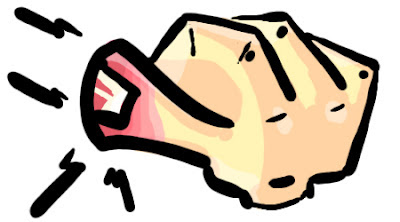 One of the great--well, OK, "fun"--things about early-season stats is that they contain extremes that don't tend to hold up over the course of the entire year. As a consequence, they look odd, dramatic, out of place--and, let's face it, who isn't attracted to someone else's sore thumb?

So today we've scoured the early stat splits to take a look at where MLB teams currently have gaping offensive sinkholes. In most cases, the dividing line here is at .500--no, not winning percentage; certainly not batting average, but a .500 OPS. That's pretty anemic, even in a year where offense is still down a bit from the last several seasons.

Consider this a snapshot of a dismal swamp, the low places where GMs and their sheep-herding on-field assistants will soon have to tread in order to address their team's inefficiencies that stick out like a...yes, we've already covered that, haven't we?

We'll do this by offensive position, and cover both leagues as we go. The numbers in (parens) are the stats for the team's performance at the position; the number [in brackets] is the league average at the position.

Two veteran catchers (Rod Barajas for the Pirates, Kurt Suzuki for the A's) are currently stinking things up. Barajas (.122) has been struggling so much that the Bucs are actually considering giving backup Mike McKenry a real shot at the job, which would at least be more interesting than the standard recycling of veteran backstops that seems to go on endlessly between small and medium market teams.

A very rough return from injury for the Mets' Ike Davis, still somnolent after a bit of a flurry after starting the year 1-for-23. Meanwhile, Casey Kotchman cements his bid to take over the featured photo for the word "enigma" in Snarke's Illustrated Dictionary.

Neil Walker, after two solid years as the Pirates' second baseman, has (for the moment at least) hit a brick wall in terms of the power department (not a single extra-base hit thus far in 2012). Jim Leyland had been rotating three chimps (the unlikely law firm of Raeburn, Santiago, and Inge) at the keystone sack this year before giving Inge the boot, and it's starting to look like a bad episode of Survivor (wait, isn't that completely redundant?) in what's left of the Motor City.

Someone wrote us (yes, you can actually do that...) to remind us that the Dodgers still had Juan Uribe when we suggested late in spring training (in our feature on Jerry Hairston Jr. and his "blow the ball foul" carnival act) that L.A. didn't have a third baseman. Good ol' Juan is proving our point...but good golly Moses (as the future Swift Boat girl in The World of Henry Orient says), the A's are taking the idea of sinkhole and expanding it to continental proportions, aren't they? Everyone knew that Oakland wasn't going to hit, but this is taking it too far. They may set the record for number of players taking turns at playing third base, however. 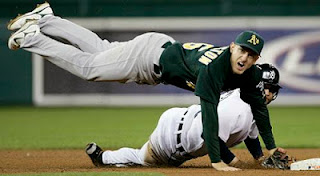 It was inevitable that the numerical symbol for the Anti-Christ would appear in this article, n'est-ce pas? And it would be the Padres who manage to conjure it up for us--how appropriate can you get??  The veteran Jason Bartlett is leading the charge for San Diego, where the holiest thing right now is the team's batting order. The A's are currently getting a Year 3 swoon from Cliff Pennington.

Interesting difference in the average production in LF with respect to the two leagues, by far the biggest deviation out there. In the midst of their hot start, the Nationals have been carrying a gaggle of incredibly inept veteran ciphers (Xavier Nady, Mark DeRosa, Roger Bernadina), all of whom haven't been worth even a reluctant swallow from a pitcher of John Nance Garner Joy Juice™. (Nady, at .077, is the biggest culprit.) And those A's just want to dominate the AL list, don't they? Truth be told, though, this is not nearly as bad relative to the league as several of their other positions that don't quite make the list--the A's have six of their eight defensive positions with sub-.600 OPS thus far in '12.

Interesting fact to ponder: at the moment at least, it's the return of center field as the top offensive position in baseball. Don't know if it will hold (you may not know this, but ever since we wrote about the percentage of 1-0 games last week, there hasn't been a single one in baseball: we've still got that negative mojo intact!) but it's at least worth noting.

Doesn't seem to helping much on the North Side of Chicago, where Theo Epstein is buying lots of new ties while the losses mount (for what it's worth, he has just peddled the biggest culprit in his CF sinkhole--Marlon Byrd--to his old team). The Angels' Peter Bourjos, in what might still be his second full season, is helping the Halos do some early-season crash-and-burn.

Sinkholes seem most prevalent in the midwest and west: here's the divisional breakdown for what we might term "offensive anemia by defensive position"--AL: East--0, Central--3, West--5; NL: East--2, Central--4, West 2. If you give extra credit for the AL Central having three RF sinkholes, that would be the tie-breaker. In the Pirates' case, Jose Tabata is one of those young players whose career is one of consistent regression.

It will be interesting to see how many of these guys will get replaced (and here's where some down'n'dirty application of the "replacement player" idea can be turned ninety degrees from its usual meaning) and how many will be allowed to work their way back above we like to call the Gino Cimoli Line (Gino is one of those guys whose career works out to a perfect zero-sum using the Sean Smith version of WAR that you'll find at Forman et fil...we use him to honor the tradition of allowing obscure players to rise out the sinkholes of their own making, to be "honored more by the breach than by the observance"). As we say 31.4% of the time at this particular juncture...stay tuned.