THE OTHER SIDE OF PERFECTION

Here are some randomly oblique (or is that vice-versa?) perspectives stemming from Phil Humber's perfecto yesterday...

First, here's a chart (below) of the "victims"--the twenty-one pitchers who ran up against an opposite hurler who went out and mowed down 27 straight batters. 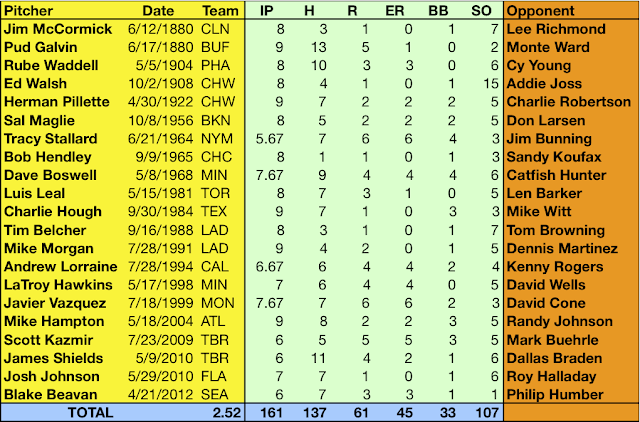 So how do the lifetime records of "perfecto victims" compare with those who reached perfection? First, the overall totals.

What about total career wins for both pitchers involved in a perfect game? Trivia time to be sure, but bear with us...pretty clearly the record for most wins is going to be a game in which Cy Young is involved, so that answer is 704 (Young and Rube Waddell).

And as you might have suspected, yesterday's perfecto sets a new record for fewest career wins for the two principals...Humber and Mariners' righthander Blake ("Bleak") Beavan have thus far combined for only 18 career wins.

[UPDATE: The metaphysics of the perfect game are endlessly fascinating, it seems--our take here being the only one with sympathy for the losers. But the strange aftereffect of throwing a perfecto is probably more compelling to most fans. The two approaches to what might be termed the "curse of the perfect game" are handled by Keith Olbermann (with a bit more time on his hands to do a little baseball research at the moment), focusing on the career effects, and John Autin over at High Heat Stats, who looks at what happens to perfect game pitchers in their very next start.  Olbermann missed a chance to summarize his data, which we'll do here: the 21 perfecto pitchers had a collective .609 WPCT up to an including their perfect game; the other side of perfection (to recast our own title just a bit...) produced a WPCT of just .536.]
Posted by Near-Genius Nephew at 7:17 AM