HITS BY THE ALPHABET: BEYOND THE "BIG FLY" MENTALITY... 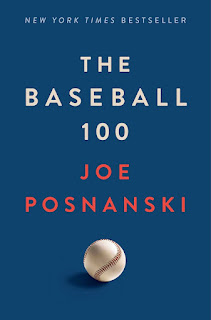 It's been a banner year for Joe P. and his BASEBALL's 100, but it is not an achievement that captures everything about the game that one needs to know. It's strong on the Negro Leagues, and speaks to our ongoing need to acknowledge baseball's prior racial transgressions. It's strong on nostalgia, which leads to a strange view of history when it is allowed to be wallowed in for its own sake (which is the bedrock skill of Joe P., whose writing so often slips into a "hushed" mode at a point when it should cut through the "fathers and sons having a catch" modality).

But it is weak on the game's present set of crises, which have accelerated to a point where virtually every long-term fan is expressing grave concerns in a rising preponderance of their own public discourse. It's also weak on nineteenth-century baseball, based on what appear to be two parallel judgments: first, Joe's friend Bill James has, in his ever-expanding dotage, become more and more derisive about early baseball, dismissing it as not being a "major league" at all; second, the segregation that was built into the game in those formative years is now an easy target, permitting it to be swept aside even while the first forty-seven years of the twentieth century that continued those reprehensible practices are granted various dispensations. 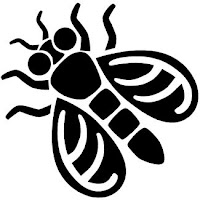 In the spirit of keeping alive the version of baseball that was exempt from the tendency toward "homer-itis", it's worth pointing out that Joe P.'s instinctive reaction to having access to "alphabetical data" (specifically, the breaking out of statistical leaderboards by the first letter of a ballplayer's surname) was to examine--you guessed it--home runs. There are three other kinds of hits that occur in baseball, but apparently those aren't worth examining. Only the "big fly" seems to matter. (With apologies, of course, to our friend and occasional operative Buzzy the Fly, who has survived the protestations of many a "Sultan of Swat.")

So let's issue a corrective to the mentality that drives Joe P. and his ilk away from the type of game with open outfields and "room to run," where speed is at least as important as power--a game where everything gets counted. Let's start with the cumulative expression of offense: let's look at the leaders in hits, and let's embrace the full-scale spirit of fun that Joe meant to convey but pushed aside to show the bias of the age he (and the rest of us) live in. 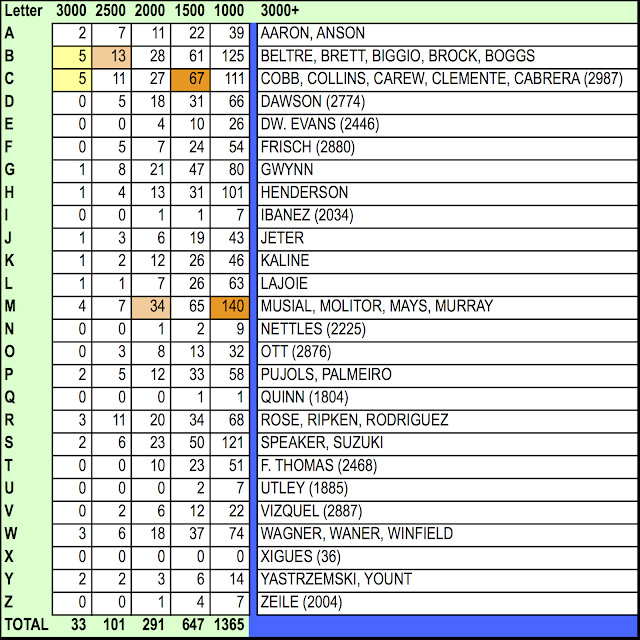 We've provided a bit more info than Joe P. did with HRs (though he spent more time on individual players than we will--less fetishistic that way, you know) in that you now know--in case you hadn't spent the last three weeks counting this up by hand--that there are currently 1365 players in baseball history (yes, even the nineteenth century) who've made 1000 or more hits during their career.

You also know the numbers for the increments as they increase by 500, all the way up to 3000.

And you have the names of the leaders for the letters of the alphabet, including Leovigildo Xigues, whose 36 hits now count in the official major league register thanks to changes that, to his credit, Joe P. advocated. "X" now marks a spot that is no longer empty...

Note that it's the B's, C's, M's and S's that do much of the heavy lifting, though we were surprised to see "H" make it into fifth place. Is anyone else surprised to see the paucity of surnames starting with N?

This type of list is fun--and we need fun. We also need to spread fun around to encompass as many things we can bring under its spell--which in this case means expanding our horizons to acknowledge that this list is just as informative and "fun" as a similar list for home runs.

We'll be back with more of these while Buzzy waits his chance to cover the "labor negotiations" for us. Stay tuned...

Posted by Near-Genius Nephew at 12:06 PM