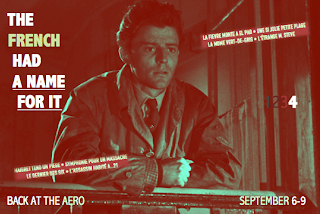 Too much planning and writing for various manifestations of French film noir--and, frankly, the more mainstream versions of what we like to do here at BBB are kinda sorta covered in the sedimented river sludge of content at MLB.com, so we await the conclusion of our book on French noir and our two upcoming festivals in Los Angeles and San Francisco to actually make a reasonable effort to cover baseball in something resembling our old, er, "panache." 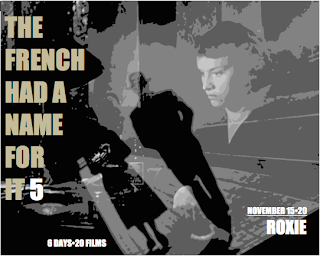 But if you happen to find yourself in LA or SF on the dates specified in our accompanying illustrations, however, do come see us--might just talk baseball for (kindly pardon the pun...) a "change of pace."

Meanwhile, in the land of homeostatic homeritis, the August numbers are within moments of being final and official. Warmer weather propped batting average up a bit (.253), and HR/G rose slightly as compared with July (1.19 vs. 1.15), but a decline in walks (2.99/game as opposed to 3.26 in July) contributed to a slight decline in run scoring (4.46 per team per game as opposed to 4.7 for July). 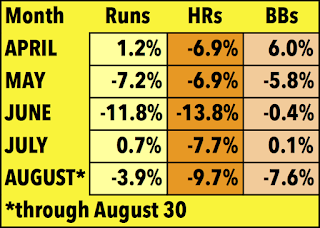 The last year the STDEV for HR/G by month was this low was in 2010. Such lack of volatility is actually pretty rare. The least volatile year for HR/G fluctuation was, of all years, the strike season in 1981.

Here is the vital sign comp chart updated through August 30 [at right], measured in percentage change from the 2018 month in question to its 2017 counterpart.

In case you're wondering, September has tended to produce HR/G at a 5% lower rate than the overall yearly average over the 2000-2017 time frame. That would suggest that the September HR/G rate will clock in at around 1.09.
Posted by Near-Genius Nephew at 11:58 PM 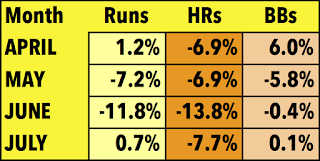 So July is in the books, and offense went up--but not because HRs returned to 2017 levels. No, it came about due to a rise in BA and OBP, with HR levels staying steady. The summary is provided at right.

Of course, HRs are still near historical highs (leaving the 2017 spike unto itself), so this "new normal" has to be taken with the same box of salt needed when we contemplate the continuing specter of the Orange Menace, but that's another story (and comparison) for another time.

More interestingly, we spent what little spare time we have right now investigating the effects of temperature on 2018 offense. Our approach is more statistically inclusive than elsewhere, of course (we continue to consider "shape" in how offense is created), and as a result there are some nuances here that bear further examination via additional breakouts in prior years.

As you might expect from what you've read elsewhere on the topic, there is generally a linear relationship between run scoring and temperature at game time. There are nuances, however--and these seem to have been overlooked. First, here's the full data set:

Note that we break up the categories into five-degree intervals (a different approach than everyone else). And when we do that we get something a bit different than a strictly linear result vis-a-vis run scoring and temperature.

Run scoring (at least in 2018) is actually higher in the coldest games (59 degrees or lower) than is the case for all games in the various temperature ranges between 60-84. It's only when we get to 85 degrees or higher than the game reverts to the scoring levels that prevailed during the long offensive explosion (1993-2008).

Note the HR/G is uniform at 85+ degrees, with a intermediate plateau in the low 80s, followed by a virtually uniform set results from 65-79. This is the so-called "smart game" referenced by Joe P., where homers prop up an offense that would otherwise be remarkably similar to what we saw in the 1963-72 era. (We'll get around to formally debunking Joe's characterization in subsequent posts.)

Note the odd fluctuations in BB/G--but pay especial attention to the extremes. Hot weather produces highest BA, ISO, and HR/G--it also produces more walks, which are likely due to pitchers being extremely careful in the increased number of men-on-base situations they face in these games. Cold weather suppresses (to an extent, at least) HR/G, but something about the weather conditions has an effect on BB/G, which shoots up to levels that look more like the late 40s "walk spike" phenomenon.

As a result, OBP is higher in these games than at any time other than the games played in 85+ degree conditions. And this counterintuitive shape combination produces more R/G than the so-called "intelligent" process of what's been called "take and rake."

It will be interesting to generate this exact breakout for 2017, for 2000 (height of the offensive explosion), 1992 (last year prior to the explosion), 1987 (first mega-HR year), and some other selected years in the past. We need to see if the "evolving" strategy of "take and rake" has caused changes in the relationship between run scoring and temperature.

From the data above, however, we can draw one tentative conclusion. Someone in baseball needs to figure out how to buck the temperature trend: an enterprising team (let's say the Rays...) should investigate all of the ways in which they can counteract the effects of hot weather. Is it a humidor, or is it something more strategically comprehensive in terms of how pitchers approach these games? And might it this be somehow related to the Rays' recent antithetical deployment of pitchers in a game? Perhaps a still-TBD combination of all the above?

While you contemplate what those adjustments might be, we'll look for some more spare time to run the additional breakouts...stay tuned.
Posted by Near-Genius Nephew at 12:30 PM