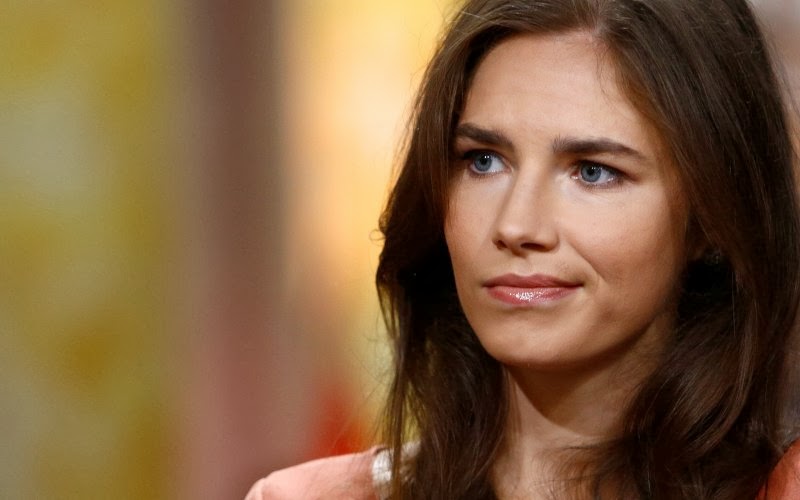 Spring games are underway; it's now officially permissible to indulge in fanboy fantasies concerning your favorite team. (Even the Astros and the Marlins. And yes, even the Royals.) However, as you can see, Amanda Knox is not too keen on the Mariners' prospects. 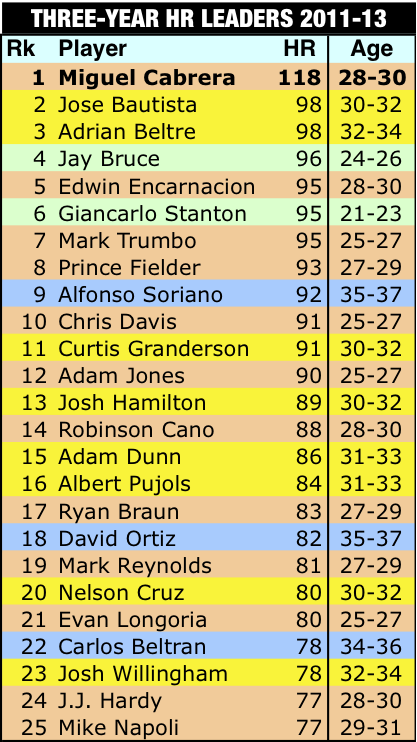 So in the spirit of all that, let's kick off a little series of posts about three-year home run totals. Are you surprised to discover that only one man (Miguel Cabrera) has hit more than 100 homers over the past three seasons? Oh, come on, don't be so jaded--admit it, it's startling. And so is the fact that he has a 20-HR lead over the next guy on the list.

Chris Davis notwithstanding, big HR exploits are in a down cycle. And our other chart here brings that point home for you--it shows the number of hitters with three-year HR totals of 100+ over the last twenty-five years, beginning with 1989-91.

We'll go deeper into these numbers in tomorrow's installment.
Posted by Near-Genius Nephew at 10:38 PM

We've been ensnarled in dragon-slaying and other prickly pastimes of late, but the specter of spring training is here, wafting through the air like one of those odor-eating sprays kept near the toilet in case of "unfortunate emissions"--and so now we inaugurate the 2014 season with that familiar hissing sound...

And what better way to do so than to return to our oldest, boldest "friends," the two teams so full of themselves that they remain gloriously, grotesquely overstuffed--you know, the Yankees and the Red Sox! (Or should that be the Red Sox and the Yankees--after all, the bearded wonders from Boston are basking in the afterglow of the World Series.)

Many of us will still have to wait for that summum bonum when both of these franchises do a swan dive and do what we'll deftly call a "double down"--a year in which they both miss the post-season. Right now, the chances of 2014 being that devoutly wished consummation are hovering around 35%.

The Yankees decided to spend money after at long last having the type of year that their detractors have been predicting for more than half a decade. The Red Sox, as is so often the case with teams who have a fluky rise to glory, have basically stood pat after jettisoning a good bit of their Yankee-like encumbrances in late 2012.

A series of new (but mostly old) faces will populate the Bronx in 2014; while the Boston crew will be virtually unaltered (and quite possibly too familiar, and you know what familiarity can lead to...).

The Yankees will hope that Carlos Beltran stays healthy, and that they can coax a decent final season from Derek Jeter. They will be the first team (if our occasionally challenged memory is correct) to have two Japanese pitchers in their starting rotation--one young, untried and expensive (Masahiro Tanaka) and the other old, relatively cheap and cunning (Hiroki Kuroda). And there's also the faded cherry blossom of Ichiro! to contemplate with raised eyebrows whenever the Yankees deploy his 40-year old shell of a former self. (Hey, it beats Vernon Wells...or does it?)

The Red Sox will hope that all of the players who pulled that miraculously collective uptick in 2013 will stay up in Year +1, and that two young players--shortstop Xander Bogaerts and center fielder Jackie Bradley, Jr.--are ready for prime time. If we hadn't been so distracted by other events, we would have quantified the extent of the Red Sox' good fortune in its "semi-on-the-cheap remodel" last year and placed it into historical context, but perhaps that's something better tackled a bit later on, so that the discussion will not be tainted by any perceived tone of "sour grapes." The taste of same, however, might well be the result in Boston this year, particularly if anything should happen to David Ortiz.

Oddly, the Sox might benefit from the sudden semi-retirement of Ryan Dempster. With extra cash in hand, they just may do something in the off-season yet. And what might that something be? Hold on to your barf bags, kiddies: they might just sign Ervin (Tater Tot) Santana.

It's an intriguing move, but it has a certain shaky logic to it, particularly since the Sox' division rivals in Baltimore have just snapped up Ubaldo Jimenez. Boston's starting staff is not nearly as strong as it seemed to be in 2013, and while Santana is in no way an apostle of consistency, he's actually pitched surprisingly well in Fenway Park over his career (3.76 ERA). While the same can't be said for his work in other AL East ballparks, the Sox can afford to spot him in those locations--a sixth starter, particularly in these "fraught with theory" latter days, gives the kind of flexibility that is both welcome and wanton (though rarely at the same time).

We think the Sox should take a flyer on the Tator Tot, particularly given that he's coming from Bill James's old, leaky love, those ever-lovin' KC Royals. There is the piquant aroma of poetry in such a move, an aroma that we already referenced at the top of this essay. And should Ervin and John Lackey (former Angels bad boys with a penchant for serving up the long ball) turn back into pumpkins, we'll witness one of baseball's most enduring rites of passage--the fall from grace. Hell, we might even grow our beard back if that should happen.

But we really will do it if the Yankees find that their spending spree in the 2013-14 offseason is ineffectual. Tanaka, Beltran, and Brian (Kick the) McCann would make a tremendous troika of tankers for a surly audience in the Bronx. Could the O's, Rays and (even the) Jays pass the two AL East gold bricks in 2014? Would the earth's axis shift a few delirious degrees if it were to be so?

In the immortal words of Tim Marchman: fuck, yes.

And we now return you to those five hundred channels of nothingness...
Posted by Near-Genius Nephew at 7:02 AM

A-ROD vs. BUDZILLA: THE FIXITY IS IN (REDUX)

We are not particularly surprised to discover that Alex Rodriguez has capitulated in the wake of his kangaroo court suspension proceeding vs. the legal sea lions of Bud Selig. While we waxed tough on this subject some weeks back, we knew that the odds were stacked against A-Rod. Buzzy the fly (who, as you know, gets around...) reported to us a week ago that all the preliminary signs were bad: the court system was giving strong signals that they were unwilling to reopen the case.

All of which proves what we know already: long-term institutional corruption in the world of big money will prevail in 95% of the cases in which it is challenged. Once the arbitrator ruled that Budzilla wouldn't testify, the iron doors began their inevitable swing-slam on A-Rod.

The embattled, overly-entitled, and poorly-advised patsy will spend 2014 trying to keep his batting eye sharp in preparation for what will likely be a controversial return. Silver-tongued wags in all nooks and crannies of the Internet have opined in all the flavors of derision (ranging from D to D+) that A-Rod will never play again, but such a scenario is extremely unlikely.

It's clear that A-Rod should have taken his case directly to the courts and bypassed the phonied-up arbitration process. What isn't so clear is why he didn't--the lingering possibility that he was guilty enough for a suspension longer than what would have been prescribed by the (amazingly elastic) rules in baseball's testing agreement. Given what's happened, however, a venue in which Selig and his seals could have been subpoenaed was the one to play in--not the stacked-deck masquerading as a short porch in which he was fooled by what might best be described as a "crypto-legal change-up."

Baseball fans, like most Americans, don't like to focus on lingering controversies: their preference is for more inchoate long-term stalemates. United in their peculiar preference for a particular type of divided consciousness, they are just glad that this tawdry matter is over. A-Rod is no downtrodden underdog, so no one will rise to his defense, even if the process by which he was scapegoated contains a dangerous precedent. They'll chalk it up as an aberration and put their heads back in the sand.

The only good thing to note in all of this is that Selig still plans to retire after the 2014 season. Who (or what) follows in his wake is still unknown, but it surely can't be any worse.
Posted by Near-Genius Nephew at 10:48 AM 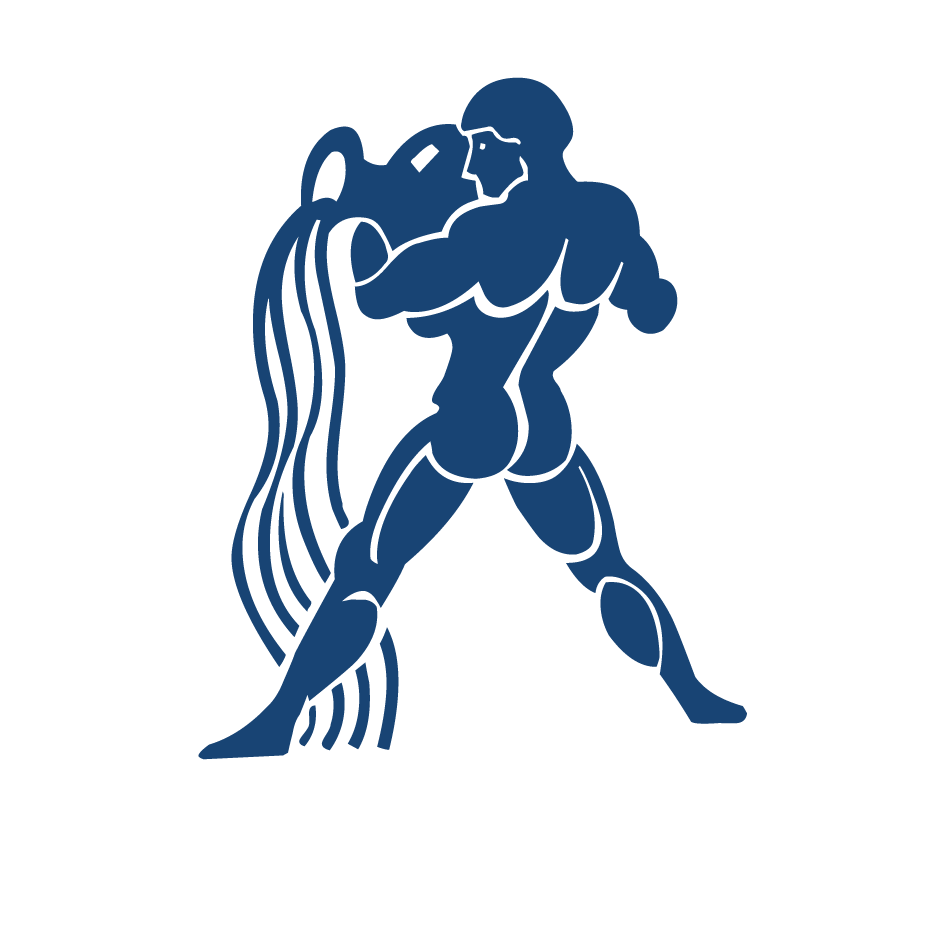 So many movies, so many eyedrops...serious fans of noir will hail the discovery of a burgeoning dark film tradition in Argentina, as uncovered by the mercurial but indefatigable "Czar of Noir," Eddie Muller. [EDIT: Eddie is a Giants fan, meaning that Bob ("My Favorite Brunette") Hope's theme song is sadly appropriate: "Thanks for the Memories."]

Which explains our scarcity of late...but now, despite popular demand, we return to the ecliptic (death threats be damned) to uncover the most mercurial of all astrological signs, the region of aerie-fairy and (as we'll see) a shocking paucity of Hall of Famers. It's...Aquarius!!

The random luck of the Zodiac has brought only eight Cooperstown enshrinees to the region of time where "la la land" was first invented, with an ironically lopsided bounty of second basemen (four Hall of Famers: Jackie Robinson, Red Schoendienst, Roberto Alomar and Joe Gordon). 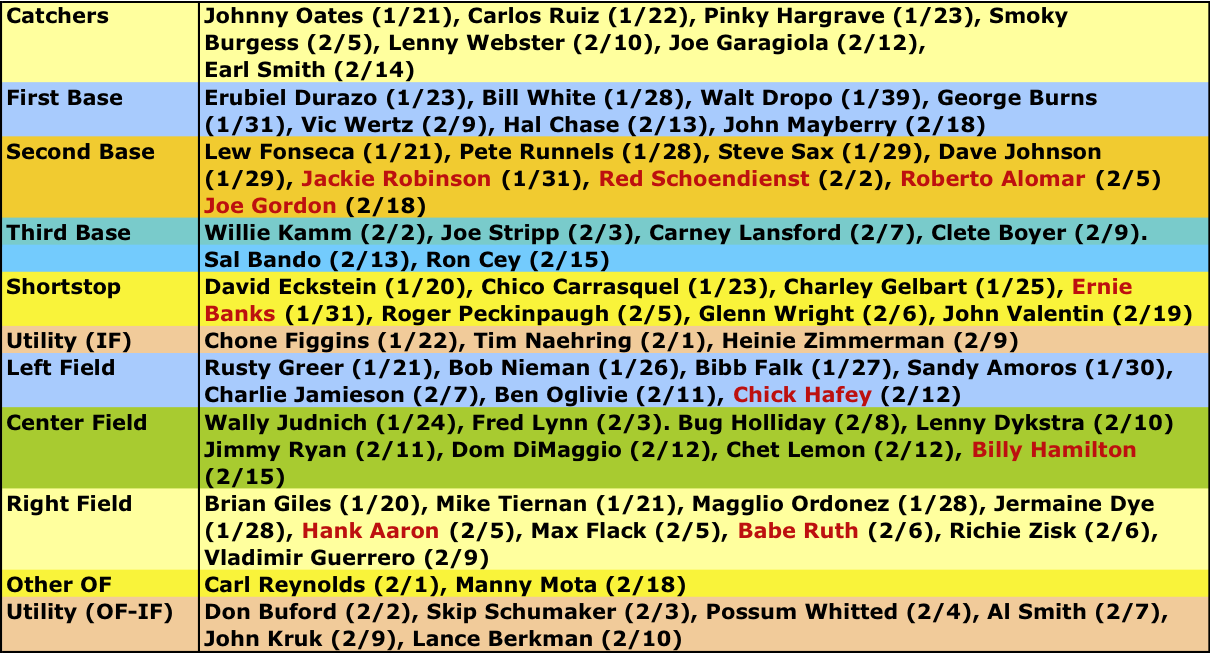 The Aquarians will always be "playing two" with Ernie Banks as the shortstop for their "A" team, and they've got a terrific top-squad outfield with Babe Ruth, Hank Aaron, and Billy Hamilton.

However, it figures that the Aquarians would be shaky and flaky in the nuts and bolts department--namely, pitchers and catchers. A whole lotta flighty journeyman are on hand to do the chucking and kneeling, and they will all too probably drag this squad into the muck of the second division.

As you can see, there's just not that much there--just one Hall of Famer, Herb Pennock (someone whose credentials have been sniffed suspiciously by the numberology brigade) and several folks with fine peak years (Allie Reynolds, John Tudor, Tony Mullane, Wes Ferrell). The "A" team will have a reasonably solid rotation and the bullpen will be OK, but this is far from world-beating talent.

And the "B" team is going to get drowned in their own waterborne liquid mediocrity (relative to the talent around the rest of the Zodiac, that is).

Here's the batting order for the "A" squad:

Moving Robinson to third helps a good bit, but you may have noticed that the Aquarians are relatively weak at first base. Bill White was a fine player, but he's no "A" team starter.

Here's the batting order for the "B" squad:

This would be a fine lineup for any given major league season--just about any 2014 franchise would love to have that crew playing for them. In the Zodiac League, though, it's a good bit spottier.

Starting rotations, A and B:

A: Pennock (have to go with the Hall of Famer here, sorry); Reynolds; Tudor; Mullane; Ferrell; Ray Collins (swing lefty)

The phrase you are looking for is "homina homina" (and if you're not, you should be). Again, some fine players in a regular season, but in this elevated league they are going to missing enough lift to get off the ground floor. 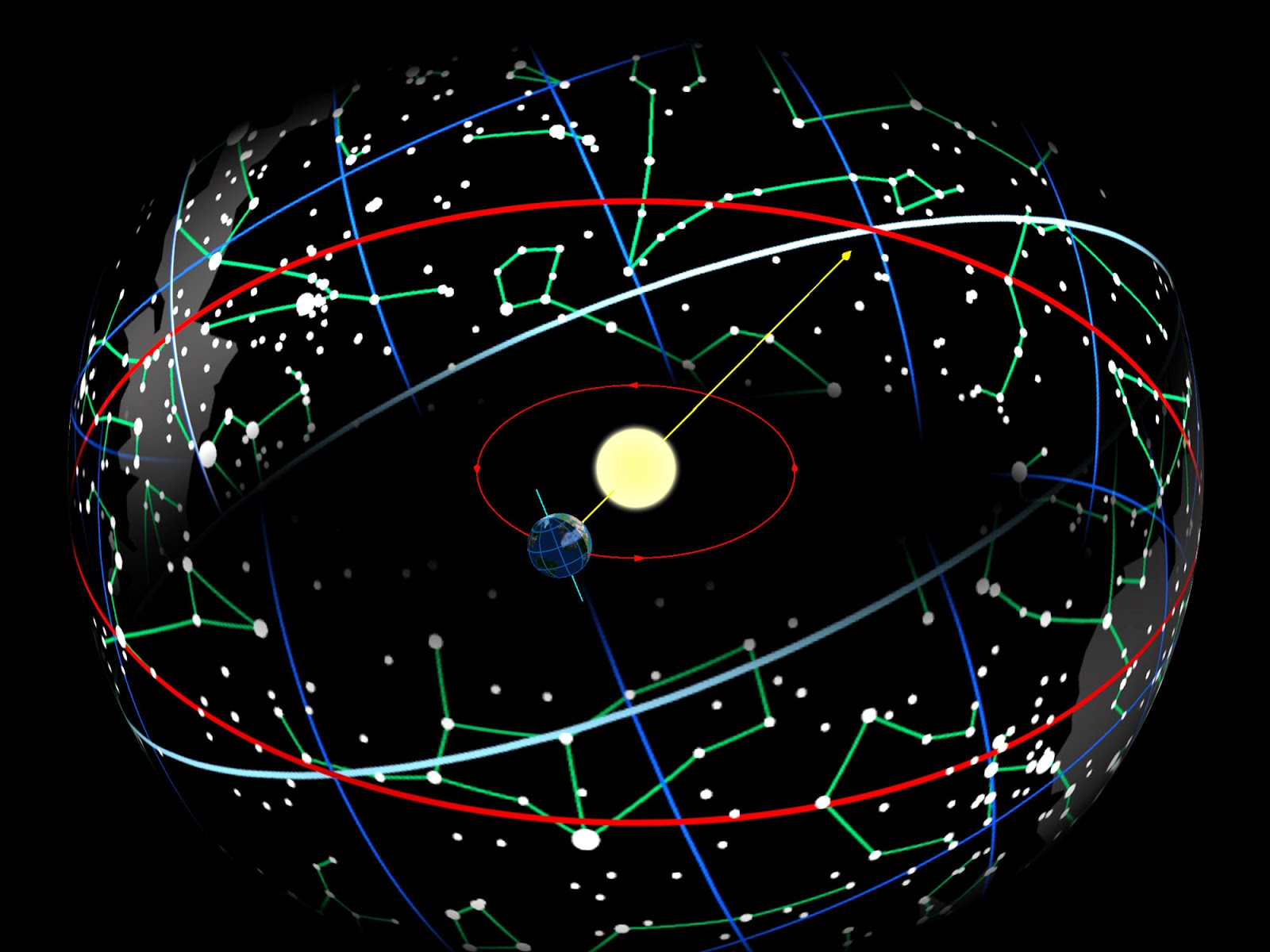 Both bullpens will be serviceable (Bolin, Urbina, Dibble, Smith and Williamson for the "A" team; O'Dell, O'Flaherty, Wickman, Murray and Hughes for the "B" team), but there are no miracles in water-bearing to be found here.

What will be interesting to see when the games are actually played is what the aggregate record of the two teams associated with each astrological sign will be. It's our guess that the Aquarians will be at or near the bottom of those aggregate standings.

And now, it's time to blast off back into the ecliptic--and not a moment too soon, eh??


Posted by Near-Genius Nephew at 8:24 AM