We are here to do the opposite of what Mr. Scott recommends--because, according to the legend that's been in print for lo these many years, we are like the scorpion and it is in our character. 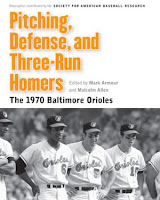 But we aren't here to trash the efforts of Mark Armour and Malcolm Allen (hey, would we trash someone who's stuck with our surname as a first name?? No, sir, not here in the West, or anywhere else, for that matter). They've put together a fine read in their anthology volume, entitled Pitching, Defense, and Three-Run Homers, utilizing one of the sayings of Hall of Fame manager Earl Weaver, whose 1970 World Champion Baltimore Orioles are commemorated therein.

We are simply here to unprint the legend, and have a little fun with the long ball (the event that, according to another mythified claim, "chicks" are supposed to "dig").

Weaver claimed he liked to wait for the three-run homer, as the title suggests. But did his Orioles teams actually hit more three-run homers than anyone else? Was his approach to building an offense conducive to a systematic advantage in multi-run jacks?

So we looked it up, thanks (as is often the case) to those dwindling pardners at Forman et fil, who can whip up a mess of data faster than you can drain your coffee cup. (And prob'ly faster than you'll be able to drain the lizard after you've had one cup too many.)

And what we found was just what you'd expect.

Heh, heh...what we found was what one usually finds when dealing with a "printed legend." The O's were very good at hitting 3-run home runs during Weaver's heyday (we've defined that as being from 1969 to 1982), but they were not the best at it over that particular time frame.

Our table at right shows the five teams who hit the most 3-run homers during these fourteen seasons. Figures in bold indicate the major league leading team in this category for each season. We've included teams who don't rank in the top five overall for the individual seasons when they led (or tied for the lead) in 3-run homers. Those appear in the far right column.

As you can see, the O's (listed on the left because we felt like it...) ranked third overall--a rather distant third, in fact, to the Boston Red Sox, who averaged nearly four more such homers per year over the course of those fourteen seasons. The Sox hit more 3-run homers than the O's in eleven of these years.

The legend may have been cemented by the O's run of 3-run shots in 1982, when they hit a total of 29 for the year. Eleven of these came from the O's magical left-field platoon of Gary Roenicke (7, tying him with Eddie Murray) and John Lowenstein (4).

Impressive? Absolutely. And even though the O's didn't quite pull off their late-season comeback and wrest the AL East from the Milwaukee Brewers (back when they were in the AL and owned by a relatively unknown used car salesman...ah, those were the days!), their homer heroics have lived on in an afterglow.

But both the Red Sox and the Cincinnati Reds were more prolific in hitting three-run homers over the time frame. The Sox had nine 20+ 3-run HR seasons from 1969-82; the Reds had seven, including 31 in 1977 (ironically, also a year in which they weren't division winners). From 1974-77, the Big Red Machine hit exactly 100 3-run homers.

OK, you say. That's fine. But what about 3-run homers as a percentage of total homers hit? The Red Sox were a slugging team in these years, more about the long-ball potential in the Green Monster than is the case today, and the Reds were called "the Machine" for a reason. Might not the O's have simply hit more 3-run homers in the overall context of homer hitting?

No. So sorry, all Ye Kings of Context. We added up the overall home run totals for each and every major league team in the time frame (and the '69 Padres, '69 Expos--remember when there was a team in Montreal??--plus several other disastrous teams from the AL that we'll be kind enough not to mention by name).

We discovered that 3-run homers have a relatively fixed percentage in the overall context of home runs. With some small amount of yearly variation, teams hit a little more than eleven-and-a-half percent of their homers with two men on base. (They hit a lot more of these with men on first and second than with men on first and third or second and third, and one of you really clever math folk can doubtless tell us why that's the case.)

Alas, the table at right shows that the 1969-82 O's are just a little bit above average in terms of their percentage of 3-run homers.

What's actually more surprising, in fact, is the discovery that the O's were actually second in total home runs during the time frame. It's not something that sticks in one's memory about those teams.

Frankly, it's a bit disappointing to discover that the O's didn't hit something like 18-20% of their homers with two men on, and were much further down in the pack in terms of total taters.

Ah, waddya say...shouldn't we just go back and reprint the legend? Sometimes facts just aren't any fun at all...
Posted by Near-Genius Nephew at 6:12 PM