Tom Seaver, who passed away earlier this week at age 75, is as iconic to the team he should have played for his entire career (the New York Mets) as Babe Ruth was to the Yankees.

Ruth joined a good team in 1920 and helped it win seven pennants over fifteen years; Tom joined a team that lost 100+ games in five of its first six seasons and led it to a World Championship in its eighth year of existence. 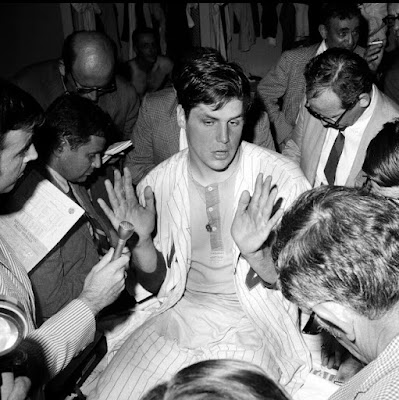 While there are greater pitchers in the history of the game (and you are free to supply your own names), Seaver is in the top ten--and he is a close second to Greg Maddux for being the most intelligent man to toe a pitching rubber.

Rather than follow those who've already eulogized him as a pitcher and a human being, we'll spend some time here looking at Seaver's glorious beginnings with the Mets, using our favorite starting pitcher evaluation tool--the Quality Matrix (QMAX) to track his evolution from a highly effective 22-year old rookie to a Hall of Fame-level pitcher at age 24 (in that magical, mystical year of 1969).

We'll take a little time with the first chart to remind those of you who've been away from QMAX (and/or from this blog) just how the system works. Simply put, it uses hit prevention and walk prevention to create a performance matrix that classifies starting pitcher performance using each game as a separate unit. The best games (to the top and left of the QMAX matrix diagram) are the ones where pitchers prevent the most hits, walks--and, to a somewhat more variable extent, total bases (the system was enhanced once more detailed starting pitcher data became available thanks to Retrosheet). 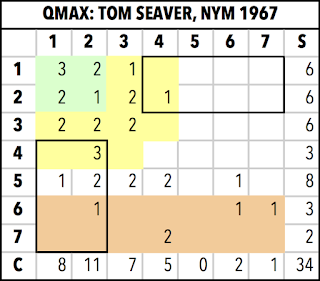 Note that these matrix regions do not use runs allowed in any way to make these evaluations. (Unlike, for example, Bill James' Game Scores.) Instead, the system concatenates all of the starts that meet the criteria for inclusion in each of the 49 performance slots in the matrix) and calculates the statistical data for each separately. The key data collected for the purposes of QMAX is the won-loss records for these matrix slots: by applying these to each individual pitcher's dataset, QMAX computes a probabilistic winning percentage for each pitcher. We call that the QMAX winning percentage, or QWP.

You'll see the extra data that is compiled from QMAX shortly; let's revisit the ranges on the QMAX matrix diagram using Seaver's 1967 performance grid as a guide to how the system works. Remembering that the upper left area of the chart is the region where the best games in hit/walk prevention occur, note the green box covering cells 1,1-2,2. This is what we've termed the "elite square," because pitchers win 88% of the games that fall in this region, while their teams win 79%. The greatest pitchers have their starts in this region with the greatest frequency. Seaver's total (eight) and percentage of total starts (8/34, or 24%) on his QMAX chart in 1967 (above left) is good but not great.

The method is set up so that the "4" region spreading horizontally across the chart represents the starts where hit prevention is almost always equal to the number of innings pitched in any given start. (There are a few exceptions to this now that total bases and the ratio of total bases/hits is factored in, but it doesn't affect the modeling enough to perturb the results.) The yellow region surrounding the "elite square" is the area where pitchers and teams win more than 50% of the time, and was dubbed the "success square" (even though the 4, 4 cell is not part of this area and thus the region is not really a square). The 6 and 7 region shown in orange is the "hit hard" region: only the games at the far left of each row are games in which pitchers can still have a viable chance to win games, since they are often limiting walks and total bases. Seaver's percentage in the 6-7 region is 15% (5/34): again, very good, but not great. The eight starts in the "5" region, though, are somewhat high.

The ranges on the chart that are tabulated into percentages are thus: the "success square" (which incorporates the "elite square" to give a total positive percentage; the "elite square" (showing the propensity for best possible hit/walk prevention in each start; the "hit hard" region (how vulnerable to games with poor stuff and/or command); the "top hit prevention" region (the 1-2 rows on the matrix chart) which show how frequently batters find the pitcher especially difficult to hit; the "power precipice" (the box from 1,4-2,7) where pitchers who are not good at walk prevention may still prevail due to their ability to suppress hits; the "Tommy John" region (the box from 4,1-7,2) named after the man who frequently could allow more hits than innings pitched but still win games due to superior walk prevention).

These can all be collated into a table that shows what we call the "QMAX range data." (Or, sometimes, called "region data.") It provides a sense of performance shape in addition to value. Of course you can also average the individual scores (cell locations) for each start made by a pitcher in a season, which can then be compared to the league average. The lower a pitcher's average is, the better. For Seaver in 1967, his basic QMAX averages are 3.53 "S" and 2.65 "C." Again, these are good but not great numbers. The QMAX range data summary for Seaver's first three seasons show how he improved incrementally over his first three years in the big leagues. The combined QMAX score of 6.18 in 1967 has improved to 5.04 (remember, lower is better) in 1969. 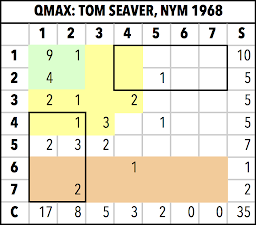 In another year, his 5.14 combined QMAX score would produce a higher QWP than .641; but 1968 was the year of the pitcher, and increased overall hit/walk prevention (and, of course, lower run scoring) decreases the value of these top games--pitchers and teams win fewer of them under such conditions--and this knocks down Seaver's QWP as a result.

In 1969, hit/walk prevention values (and run scoring levels) increased, and the mound was lowered 5-6 inches in height. This seemed to affect Seaver in the early going, as his QMAX values declined (remember, higher is worse) to around the levels of his rookie year. In mid-May he began a streak of twelve starts that represented his best sustained performance rate to date (2.75 "S" and 2.17 "C" from May 21 to July 14). This included his near-perfect game on July 9, where he set down the first 25 Cub batters he faced before settling for a one-hit, 11-K shutout (a game that, yes, grades out in the 1,1 cell on the QMAX matrix chart).

The Mets had closed to within four games of the Cubs at this point, but Seaver's next three weeks were the roughest portion of the '69 season and coincided with a fade by the Mets such that they were 10 games back of the Cubs in mid-August. Seaver's QMAX score of 4.2 "S" and "3.2" C over those five starts included two "hit hard" games, created some concern for the health of his arm, and caused many to conclude that the Mets were not really ready to chase down the Cubs in the newly formed NL East. 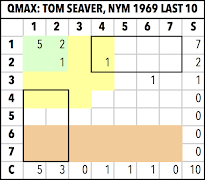 But Seaver not only returned to form with his start on August 16, he began a streak of ten outings that are arguably as fine a streak as ever seen (a statement that includes extended hot streaks from such estimable names as Maddux, Sandy Koufax, Bob Gibson, and Pedro Martinez).
In those ten games, Seaver threw five (5) 1,1 games, was in the "elite square" eight times (80%--as opposed to a league average of 14%), and produced a surreal .911 QWP. (His won-loss record over those ten starts is just about what you'd expect: 9-0.)
Tom's "S" and "C" scores for these games: an otherworldly 1.4 "S" and 2.1 "C." Together with his left-handed counterpart, Jerry Koosman (2.4 "S" and 2.5 "C"), he carried the Mets into first place when the team was missing its best hitter (Cleon Jones--a topic we've covered in a previous post) for two weeks during the September stretch drive. That set the stage for the most unexpected outcome in the World Series in more than half a century. 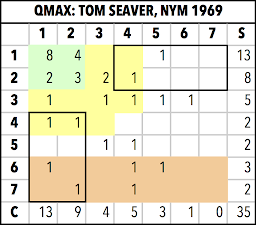 That incredible finishing kick lifted Seaver's overall totals for 1969 into the realm of greatness, as he wound up with a .700 QWP for the year, with just under half his starts falling in the "elite square." His level of dominance as a power pitcher, as measured in his "top hit prevention" percentages (the ratio of total starts that grade out in the "1" and "2" rows of the QMAX matrix chart) increased from 35% in 1967 to 60% in 1969.

All in all, 1969 was the year that set up Tom Seaver for his Hall of Fame career that followed. We'll return with a look at the next six years of his career shortly, via the lens of QMAX.

Thank you for your greatness both on and off the field, Mr. Tom Terrific--and rest in peace.