The answer to the above question certainly seems to be yes, and it appears to be occurring in the context of an overall resurgence of home runs--with primary emphasis on the AL. 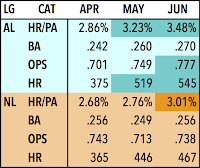 Here are some salient monthly breakouts in 2016 by league that will show you how this is progressing this year (table at right).

We were lulled to sleep in April by low BA/OBP totals. But the AL quickly rebounded in May and pushed its HR/PA percentage over 3 (which is the benchmark for what we term a "slugging league").

They upped the ante even more in June, and the NL started to come along for the ride, pushing their HR/PA above 3 as well. 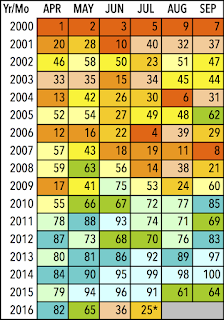 The June totals indicate that offense, at least in the AL, is not just creeping back, but has flooded the game, pushing offense levels back in the direction of the offensive explosion years. We can measure that in two parallel historical comparisons.

First, here (at left) are the R/G rankings by month for the last 100 months of major league baseball (sixteen years from 2000-2015 plus the first four months of this year--with the caveat that the July 2016, added after our deceptive "post date," is a very small sample). 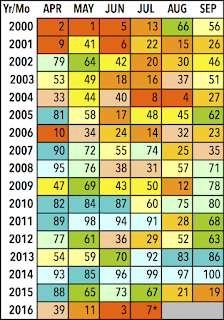 The heat chart certainly shows how offense slowed down in 2008, and then really took a dive from 2010 through most of 2015. But as you can see, things started to change in August of last year--and, from what we can tell, nobody really picked up on that. This year, we had a slow opening month, but look what's happened since.

What we can see when we create the same breakout for HR/PA over the last 100 months of baseball (at right) is what is driving this change. It's simple: home runs are up, way up. Most of the gain in the overall HR/G stat in 2015 from the year before seems to have come in a significant uptick in HR frequency in the last two months of the year, and that trend has made an astonishing acceleration as we approach the summer of 2016.

Pretty amazing to see the HR/PA rate in the month just concluded up there with the rates achieved in 2000--the year with the highest R/G average in the history of baseball (not counting the 1890s).

And we can see more clearly how big the jump in HR/PA was in August 2015 and how it is driving this crisis in pitching.

Time will tell if this is just an aberration, such as the one you can see in August 2009, and to a lesser extent in August 2011 and July 2012. But given the movement over the past six monthly data points since August 2015, we're not getting the feeling that this is an aberration.

As for the crisis in AL starting pitching, here's a simple chart that can put that into perspective. This displays the breakout of starting pitcher ERA in for each of the first three months of the season. Note that in June the bottom falls out of AL starting pitching, with nine of fifteen teams posting ERAs of 5+ for the month. (And that includes the Orioles, who hit 56 HRs--matching the highest monthly total of any team in past 17 yearrs--and averaged .300 for the month, allowing them to have a winning month of June anyway.)

And for what it's worth (small sample alert), the Indians, whose starters bucked the June swoon, have hit a speed bump early in July, including a 17-1 shellacking in which ace Corey Kluber had a ugly outing. That's mostly due to the matchup (Blue Jays) but it points out that offense is back, and it's the long ball that is leading the way. We were complaining about baseball being two-dimensional in recent years, but now we may be seeing its return to one-dimensionality. 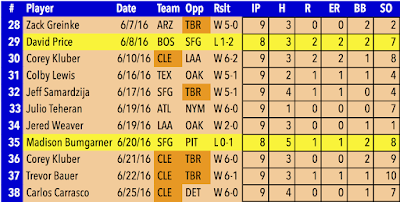 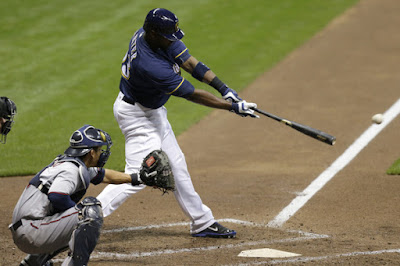 Monday, Monday...now why does that sound familiar? Anyway, the first day of the week has not been much for CGs in 2016--at least not until the last two weeks.

As the calendar chart at left shows, CGs suddenly clustered on the 23rd and the 30th (this past Monday, in fact).

There were three on the 23rd. Not to be outdone, the 30th conjured up four CGs--the first time in 2016 that this has happened.

You can see the pitchers in question and their CGs in the table at right. Knuckleballer Steven Wright tossed his third CG of the season on the 30th, tying him with Johnny Cueto and Clayton Kershaw. Bet you saw that coming, yes?

There were 20 CGs in May. If we get that same number in June through September, we will wind up with 106 CG--which will mean that we'll still be stuck with triple figures for awhile longer.
Posted by Near-Genius Nephew at 4:42 PM