Last up, the first installment of our fifty-one year look at the post-season records for teams since the beginning of divisional play...scroll down for a complete decade-by-decade look at teams' records in the postseason. 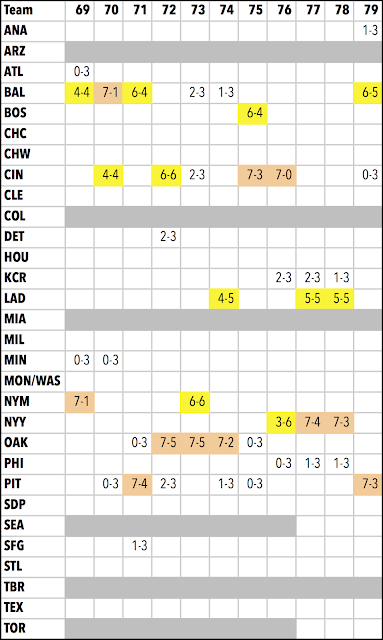 There are far more dominant teams in this time frame, and many more "duds" who never make the post-season at all:

It was not a great time for competitive balance. Only 8 of 24 teams (33%) made it into the World Series. There were many repeat World Series appearances:


Posted by Near-Genius Nephew at 1:03 AM

Continuing to move forward into the past, with our fourth installment (that future folks will read second to move forward from the past), here is the post-season data from 1980-89... 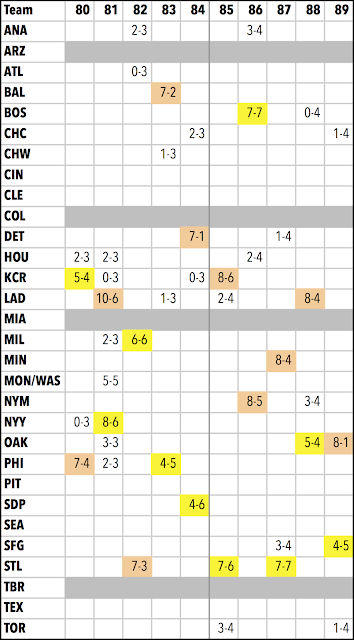 This decade inspired us to appropriate the title from Ted Vincent's book about nineteenth century baseball, "Mudville's Revenge"--given that in the years beyond the initial wave of free agency, appearances in the post-season did not cluster in big-market franchises. Indeed, no one actually dominated the post season in the 1980s, as the table (at right) and our listing (below) demonstrate:

Only one team won multiple World Series: the Dodgers, whose 1988 team was not expected to get past the Mets in the NLCS, much less the A's.

Posted by Near-Genius Nephew at 9:38 AM 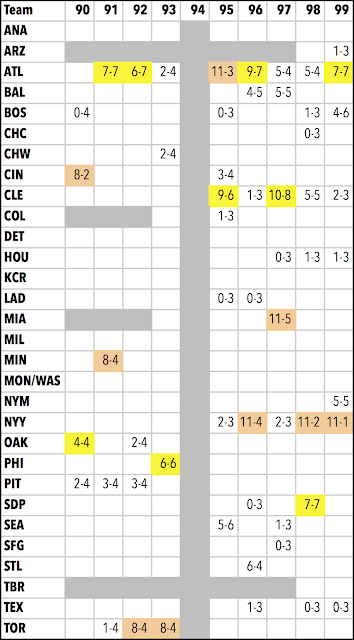 So here we are, doing a backwards tango (no Love Pie™reference intended this time...) to provide future blog readers a chance to see this post-season data in standard chrono order. Here are the results from 2000-09 (table at right): 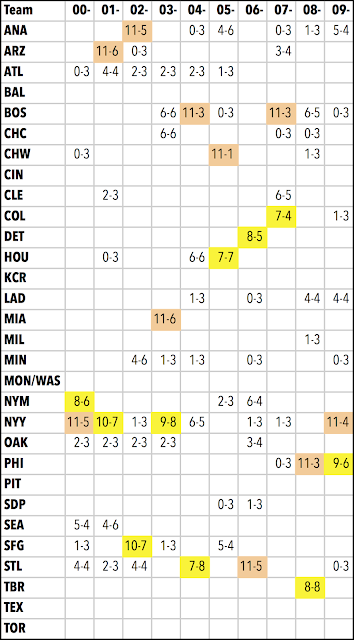 First, note that there are more teams shut out of the post-season during this decade than in 2010-19 (and many of the other decades we'll see later...or is it earlier?).

Of course there was only one Wild Card team per league during this time frame...but there were no teams in 2010-19 who only made it into the post-season as a second Wild Card team.

Playoff appearance totals in the 2000-09 decade:

Posted by Near-Genius Nephew at 4:40 PM 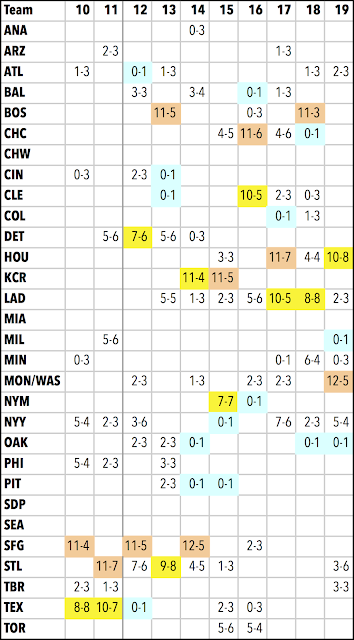 As most of you know, we are not nearly as obsessed with baseball's award season as is the case with others. One of the places where sabermetrics took a wrong turn was in its desire--no, its fetish--with rewriting past history via the various awards: MVP and Cy Young in particular. (And let's not get started with the Hall of Fame.)

Using advanced analysis to better understand the value of performance is one thing--it can help those folks in the mainstream media do a better job of picking award winners in the future. But the obsession with rewriting past awards, like so many things in twenty-first century America, has become toxic in nature. (We should focus on trying to change things that actually matter to human beings who are alive today--those in need, those who are suffering, or who are in direct danger due to matters that the rest of us can rally behind to correct--instead of descending into a rabbit hole of reinterpretation over a fait accompli that does not really advance knowledge.)

Of course, there are exceptions to (virtually) every rule. In the past, we've bent these rules in terms of baseball awards to look for voting patterns--to see, for example, if there were systemic biases built around certain stats. Most of our "bending" is found in the area of starting pitching, due to the development of the Quality Matrix (QMAX), still the only organic system utilizing probabilistic methods. The QMAX winning percentage (QWP) remains the most useful tool for assessing starting pitcher performance currently available, and it's the only one that does so by ignoring runs allowed as part of its methodology.

But that's far enough about it--and us. What's interesting is that both FIP (many of you know it in its "long form" as Fielding Independent Pitching) and QMAX (working from significantly different assumptions/approaches) tend to clarify aspects of starting pitcher performance that tend to remain opaque using other measures. What's more interesting is when these measures diverge, as is the case in the 2019 AL Cy Young race.

FIP is not nearly as much in alignment with WAR in ranking starting pitchers, because it uses a different sliding scale to extract its value measurement. It prefers a particular type of pitcher, whereas WAR only wants to know who allowed the fewest runs. FIP predicts a kind of "Platonic" ERA using its formula, but it's not probabilistic--it's not based on game-by-game perturbations as QMAX is. The differences in their results are instructive, but not quite conclusive. 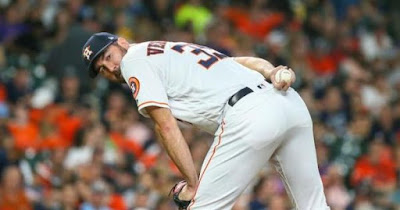 In 2019 FIP rejects WAR's conclusion that the AL's best pitcher was Justin Verlander. (The reason: despite a superb ability to prevent hits in general, Verlander gave up a lot of HRs--36, to be exact--which forces the method to account for this and penalizes for it. So the system actually projects more runs allowed from Verlander than was actually the case.) It suggests that his teammate Gerrit Cole was the best pitcher, which is supported by Cole's ERA (1st), ERA+ (1st) and FIP (1st). 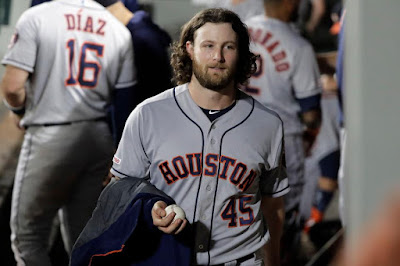 QMAX, which grades each start for hit prevention and walk prevention and assigns a "matrix grade" for each performance component, makes adjustments for HRs in the actual context in which they occur, which is not the case for FIP. QMAX prizes hit prevention in individual games more highly than any other aspect of performance, but it achieves its probabilistic precision by calculating an expected win value for each segment on its matrix chart (all 49 performance gradations), thus producing a probabilistic winning percentage (or QWP, as noted above). 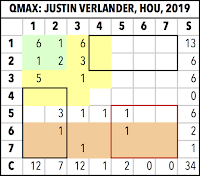 For the Verlander vs. Cole comparison in 2019, it shows significant difference in the two pitcher's performance shape, but not in their overall value. In fact, there's little daylight between them, from their raw QMAX averages (Verlander: 2.71 "S" or hit prevention, 2.24 "C" or walk prevention; Cole: 2.73 "S", 2.33 "C") to their QWPs (Verlander .685; Cole .679). If ever there probably deserved to be a tie in the voting, this is the year. 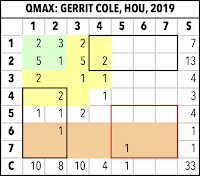 We talked about "shape" differences in their stats. This may seem baffling, considering how similar the shape of their numbers stats appear to be (similar H/9 ratios, similar K/9 ratios, similar K/BB rations, similar WHIP values). But the difference can be seen in the QMAX matrix chart, and it helps to explain how the two pitchers wind up with highly similar value measures despite the shape divergence.

Putting them side-by-side (or, in this case one on top of the other) can show the difference. The top two rows of the QMAX chart (the numbers in the "1" and "2" slots moving down the diagram) are the region of greatest hit prevention, but the "1S" group is enough better probabilistically to make a difference in the valuation. (The 1,3 game is just as likely to be a winning game as a 2, 1 game: the average probability of a win in the "1" row is more than a hundred points higher than in the "2" row.

That is why Verlander, despite his extra HRs allowed, and his greater incidence of games where is not ultra-dominating (the 5-7 rows, where he has just over a quarter of his starts as opposed to only one-sixth for Cole)--despite these aspects that compare unfavorably to his teammate, the essentially reversed placement of 1S-2S games is the reason why he winds up having a slightly better overall QWP.

Of course, this is not predictive in terms of individual games, as we (and Verlander) discovered in the World Series. His penchant for giving up home runs, which reached its peak this year, worked against him in those games. But he also had off-games in terms of hit prevention--an event that can happen at random throughout the season. Cole fared better in the World Series, but also was not as dominant as he was against the AL in 2019.

We should expect a vote as close as the QMAX results--and, for the sake of fairness, we should hope (as already noted) that they somehow manage to tie. They are both deserving. Sometimes that's just the way it is, and that's the way it should be remembered. Fingers crossed...

[FOLLOWUP 11/13: Voting results are in for AL CYA...Verlander 171, Cole 159. If two BBWAA voters had switched their first-place votes from Verlander to Cole, there would have been a tie.]
Posted by Near-Genius Nephew at 2:31 PM