We promised you some additional data pertinent to World Series HRs; lo and behold, we're actually following through on that promise...

First, the table with overview information. As you'll see, the 2022 World Series will definitely produce the 1000th WS HR. (We haven't looked yet to see how many HRs have been hit in the pre-World Series post-season since 1969, but it's got to be a good bit past 1000 at this point...we may follow up on that during the off-season at some point.)

A key column in the data is marked %WT HR...that's the one giving you the percentage of total HRs hit by the winning team in each WS. The grand total shows that winning teams have hit 55% of the HRs that have occurred in the WS, with the HR/G per team average now settling in at .72 (...if you're calculating at home, remember to multiply that G total by 2 in your equation to get homers per game per team).

As you'd probably expect, that average HR/G total has been rising over time, as the various time slices indicate.

Next we have the opposite table from what we showed you in the last post. Here are the teams who were out-homered the most in the World Series and still managed to win. Oldsters are not going to be surprised to discover the 1960 Pirates on this list, setting a "WS homer deficit" record (-6) that stood until the Angels knocked off the Giants in 2002 despite a deficit score of -7.

Such a scenario has remained viable in the twenty-first century, as you'll see by noting the fact that four of the seven teams with the greatest negative differential are post-1999 teams. Of course, 2015 was a more different brand of baseball than what we've experienced over the past five years.

Having seen this list, you may be wondering just how monolithic the HR differential is in helping to determine the WS winner. We have a nifty little chart that summarizes all of those differentials in terms of the WS winners and answers that question for you.

With that, you are free to go gentle into that dying of the light known as the off-season.

Posted by Near-Genius Nephew at 9:16 AM

IF YOU'RE THINKING THAT SOMETHING WAS LOPSIDED...

...in the World Series you just saw (or, for that matter, boycotted)--

The Atlanta Braves tied a record for the greatest differential in HRs hit in the World Series by the series winner as they wrapped up the '21 Fall Classic with three more round-trippers in their 7-0 Game Six win. 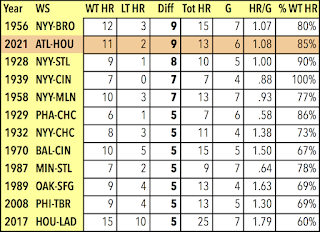 As the table at left tells you, the Braves outhomered the Houston Astros 11-2 over the six games, making for a differential of +9 for the winning World Series team.

The only other time that a winning WS team hit nine more HRs than the losing team was back in 1956, when the Yankees hit 12 HRs in their 7-game win over the Brooklyn Dodgers, who hit only 3 HRs.

We'll come back with some additional data about home runs in the World Series in a subsequent post.

Posted by Near-Genius Nephew at 2:14 AM