VLAD AND ANDRUW: THE LAST REDUX? 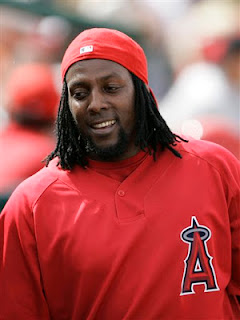 Odds now strongly point toward the end having come for one of our latter-day favorites, Vladimir Guerrero, who hasn't latched on with a club over the winter and is still on the outside looking in as the season gets underway (as a cold snap in the East starting us out with games that threaten to bring back the spectre of 1968). 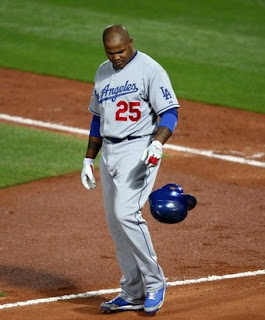 Way back when (in the latter stages of the Clinton administration...), we used to debate the ultimate career arcs of Guerrero and Andruw Jones, with various folk making the case for one vs. the other. Today that debate begins to come to it end, what with Guerrero's race run and Andruw playing out the string as a platoon player with the Yankees.

Of course, the debate may never end, because we have the twin towers of WAR (Wins Above Replacement), which purport to rank player performance. The offensive side is pretty cut and dried; it's been around for years and is essentially unchanged from its inception. The defensive side has been hyped mercilessly in the past decade, part of the major makeover of sabermetric stats that purportedly raise the bar in terms of our understanding. Andruw Jones, before he ate his way out of being the cross between Willie Mays and Garry Maddox, had several simply unbelievable seasons--so sayeth WAR, that is. (We are still firmly convinced that the center field stats have always had their value inflated in the models, and that if one corrected for that, the overall defensive value would be more accurately redistributed...Jones would still rank near the top for the seasons he had, but the value placed on those outlying putout totals would be proportionately lowered, and would decrease his overall WAR totals.)

Vlad was clearly the better hitter, and by a wide margin (nearly 20 wins). The two players' OPS+ values (140 for Vlad, 111 for Andruw) provide another form of confirmation. (Oddly enough, one stat where Vlad is in the lead when we compare their stats is quite surprising for those who remember the players in the late 90s: Vlad wound up with 181 stolen bases, while Andruw, whose speed as a young player caused many to melt, currently has 152.) 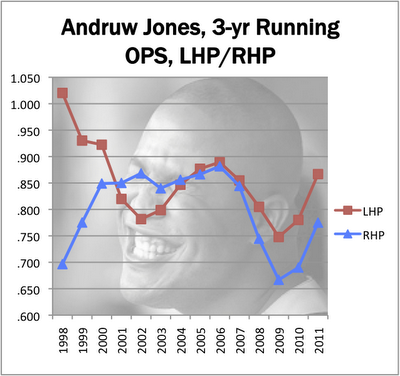 Of course, Andruw is still playing, as he survived his catastrophic meltdown in 2007-08 and has emerged as a viable platoon player vs. lefties. He might have enough juice left to overtake Vlad's lifetime HR total (Andruw has 420 going into 2012; Vlad had 449 at the end of the 2011 season).

Going into 2009, no one would have expected that Andruw would actually remain in the majors longer than Vlad. So what happened? As we said, Jones recouped his swing against lefties, while over the course of 2009-11, Vlad lost his.

Our three-year running charts give us a snapshot of how this occurred. Andruw was a beast against lefties when he came up, but it's clear that he's been on something akin to a rollercoaster against lefthanded pitchers since the late nineties--and, in fact, the deep dip that he took against southpaws in 2001-2003 is quite probably the thing that cost him a shot at being a superstar and going on to the Hall of Fame. His hitting against righties stabilized fairly early and remained reasonably consistent for the better part of eight years, but it took an extremely sharp dip beginning in 2008 (and only just re-emerged last season).

It looks as though Vlad's decline has been coming for some time now, though our survey of five key split stats (Vlad's results when he hits fly balls, his results against flyball pitchers, his hitting on the first pitch thrown to him, his record against power pitchers, and his hitting against lefthanders) show that the ones that seem to have precipitated his collapse--and such a term must be used, based on the data--are his  hitting against power pitchers and lefties.

It would be interesting to both graph and tabularize this data for many hitters, for we might learn some tidbits about the nature of decline in aging hitters...for example, do certain splits operate as leading indicators or predictors of impending collapse?

We see this in a bit more relief when we look at it in tabular form, an approach that juxtaposes single-year stat values. Those selected totals, spanning 2-4 year gaps in Vlad's career, show a hitter whose inability to hit power pitchers would seem to be the key to his career decline. (It's the one with the lowest peak level of accomplishment; his hitting against lefties is second.)

The injuries to Vlad's knees have made him into a DH, and that cut down his options in terms of signing with a team for 2012. Of course, we are filled with impish self-interest  here, but we'd like to see Vlad get a shot with Toronto--it'd be a return to Canada, and it turns out that Vlad has hit .359 there over the years (with a 1.011 OPS). The place he doesn't want to go, however, is Minnesota--he's hit only .221 in the Metrodome, and while his batting average is higher in the Twins' new home (Target Field), he showed no power whatsoever there and his OPS is actually lower there than in the old Dome.

All in all, a sad day, as we all rediscover the old adage that getting old...sucks. Thanks for the memories, big guy.
Posted by Near-Genius Nephew at 11:55 PM