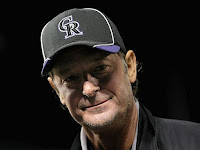 Jamie Moyer picked up win number 267 last night against the Padres, making him the oldest pitcher in baseball history to record a victory, which is hopefully a story that will continue to repeat as 2012 plays out.

One interesting question that has surfaced as regards Moyer's ongoing viability as a successful starting pitcher is only marginally related to his age--the question of his strikeout rate.

It's been noted that thus far in 2012, Moyer's K-rate is significantly lower than it's ever been previously. (It's currently at 3.1 per nine innings; the lowest K-rate that Jamie has registered over a full season is 4.4 per nine, which happened way back in 1996, when Moyer was "just" 33 and about to begin the most successful period of his career.

So what we want to know is: how rare is to be a successful starting pitcher in the big leagues with such a low K-rate. Thanks to Forman et fil, we can create a list of starters from 1976-2011 who've had an ERA+ of 110 or higher with a K-rate below 3.5. That list can be found at the left, sorted backward in time from the present day to 1976.

What's immediately clear, of course, is that the drift toward more K's (a phenomenon with multiple causes) has pretty much pushed out low K-rate pitchers. There are only five pitcher seasons from 2000-2011 who fit such a low-K profile--and there are only 14 such seasons over that time where starters have thrown more than 150 innings with such a low K-rate.

So while the changing nature of the game seems to be making these pitchers a species bordering on extinction, they are not all the way to dodo-bird status just yet. While long-term prospects for such pitchers remain guarded at best, there are still instances where low-K "mirror-meisters" can not only survive, but thrive.

And let's face it, what type of long-term prospects are there for Jamie Moyer to worry about? This is a low-key, off-beat, hard-to-fathom (add hyphenated phrase of choice here...) type of phenomenon--one that essentially defies analysis: let's have a good time while it lasts.
Posted by Near-Genius Nephew at 7:57 AM