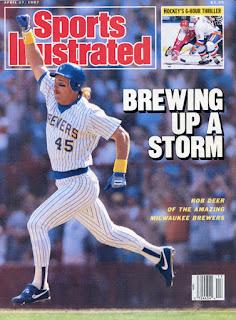 We'll have some ongoing retro-expectoration here as the year grinds on, what with the capacity to dig into past stats up to (and beyond) our elbows thanks to the resources at Forman et fil, Retrosheet, and David Pinto's Day-By-Day Database.

First up--here's what the consolidated (meaning both leagues--David P., if you're reading this, an extra filter that allows us to run these queries by league would be a nice addition...just sayin'...) batting leaders would have looked like if you could have corralled the data as easily then as we can now.

This is where things stood, hitting-wise, as of 4/27/1987. What you should keep in mind is that when all games were completed on that day, the Milwaukee Brewers were 17-1 (!!!) and the future Commissioner of Baseball was wearing diapers as a protective measure. 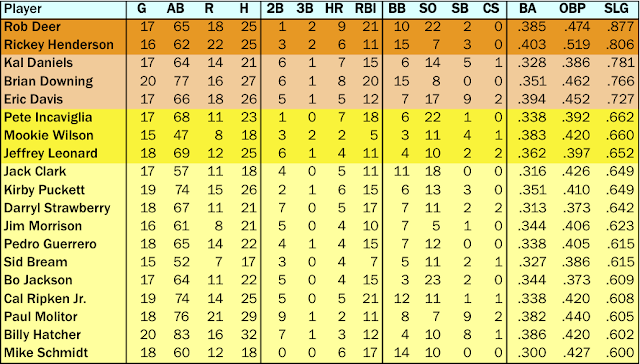 And, yes, this is a major reason why we use those two-month windows for capturing data when we compute the Ptolemaic MVP. Otherwise we'd be getting all excited about the insanely hot starts that Rob Deer or Pete Incaviglia--and even Mookie Wilson--were having. (OK, truth told: we actually weren't all that excited about it when it actually happened.)

The Brewers would follow their 18-3 April with a 6-18 May, giving back eleven games in the standings over that month, kind of like what the Braves and Red Sox did last year...only they did it in May, thus it is merely a footnote.
Posted by Near-Genius Nephew at 6:15 PM