FAST-CLOSING "MEH" TEAMS AND THE YEAR AFTER...

So a certain someone (whose name will be withheld to protect any and all aggrieved parties) was curious to know whether teams that finish well in the previous year (over, say, the last 35 games of the season) have any kind of "carryover effect" in the following season.

There was a more specific genesis for this question that should be plopped on the table at this point. The poser (and I don't mean that in a pejorative sense: let's just the "questioning one") wanted to know if teams that finished strong but still had a mediocre overall won-loss record in Season 0 would trend toward better performance in Season +1. Specifically, the 2011 Dodgers, who were only 82-79 for the season but won 25 of their last 35 games.

So we picked through the data at Forman et fils that permits us to look at streaks, located the 200 teams with the best performance over their last 35 games, and winnowed down the list to include only those teams who played at least .686 ball (or 24-11) in that time frame. As you might expect, the vast majority of the teams on that "top 200" list posted season records that were much, much better than "meh" (the favored diminutive for mediocre). More than 85% of the teams on the list were purged because they were too good.

So that leaves us with a total of 27 teams that were "meh" overall in the year in which they finished strongly. (And even here we stretched a little bit, putting teams on the list that were 20 games over .500). 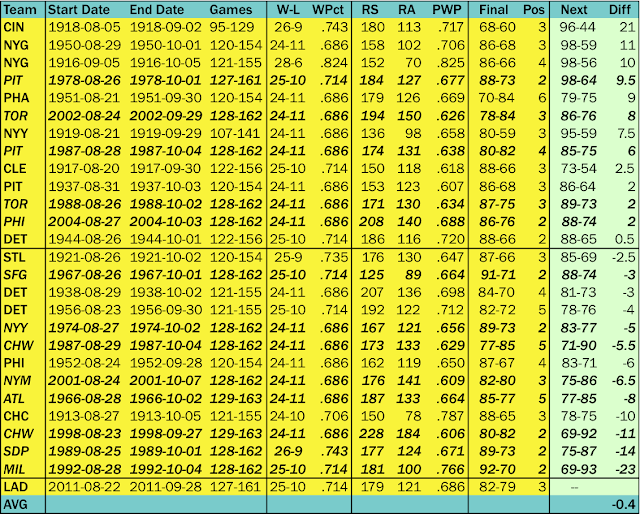 The total differential for these 26 teams is -10 games, which averages out to just under a half-game worse per team in Season +1 than in Season 0.

We've put the post-expansion teams in bold italics. Those thirteen teams have performed a good bit worse than the average, winning nearly four fewer games in Season +1. If we pull out the '92 Brewers, however, that cuts this in half.

No matter how you slice it, we just aren't seeing much of a carryover trend for these kind of teams. They are all over the map when it comes to the "afteryear." At the top of the improvement list we have three pennant winners--the 1919 Reds, 1951 Giants, and 1979 Pirates. There are two other pennant winners on the list: the 1920 Yankees and the 1945 Tigers, but it's dicey to include that last team for two reasons: first, we're talking about the tail end of the war years; second, they only improved by a half-game and are one of the teams who were a bit too good in Season 0 that to be on the list in the first place.

So, the range of expectation that the Dodgers could improve markedly (meaning seven or more wins in Season +1) is about one in four.