The "must pitch to three batters" rule that has been implemented as part of Rob Manfred's desire to speed up the game created a certain amount of consternation when the decision was made to make it permanent.
(Cue the obligatory line about death and taxes here...)

It was another one of those rule changes made in a vacuum, without any meaningful data analysis--an occurrence not so shocking in the days of yore (remember the 1962 strike zone change, the game's General Custer moment) but strikingly out of character in the age of Big Data.

Some suggested that a key component of the manager's toolkit was being stripped from them, that this was a bridge too far (yada yada--what the hell, let's throw in a "yabba dabba do" too, just to stay in practice), and that a time-honored baseball strategy was being tossed to the wolves for the sake of a measure that would, at best, shave off three percent from the game's ever-lengthening duration. 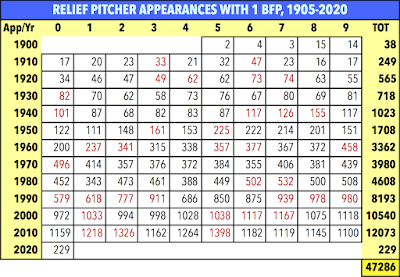 OF course, the question of just what constitutes "time-honored" is one of those elusive, elastic concepts that baseball likes to reference even as it is shredding its own history at a rate approaching the game's ongoing avalanche of charred elbow ligaments. But thanks to the heroic data parsing practiced by the folks at Forman et fils (you know it as baseball-reference.com), we can actually look at the phenomenon of the one-batter pitching appearance as it has evolved over all that "time-honored" time.

Well, at least back to 1905, anyway, which is the current limit of play-by-play data. And when we do that (the table above), we see that it took quite a bit of time to get to the type of rampant use of one-batter pitching appearances to which we've become so unconsciously accustomed. (It also took quite a bit of time to amass 47,286 one-batter pitcher appearances...)

The numbers in red show the movement upward (whenever the total number of such appearances represented a new record). The decade totals at the right show the major jumps for one-batter pitching appearances occurring in the 1960s and the 1990s, with the trends going into a kind of steady state increase in the first two decades of our current see-saw century. 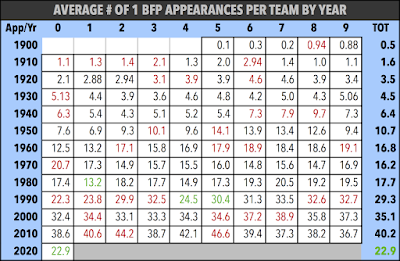 Now don't be fooled by that drastic drop in 2020--remember that we only had a 60-game schedule last year (for some reason or another). To see how much the "must pitch to three batters" rule affected the number of one-batter appearances (which can still happen, of course: the rule's "out clause"--heh, heh--is that it evaporates once the inning ends...more on this shortly), we need to recast this data into the number of appearances per team per year.

Which we have done with the table on the right. When the data is adjusted to take into account the number of teams in MLB over the years, and we prorate 2020 to a full season, we see that the employment rate of one-batter pitching appearances (22.9) dropped a bit less than 50% from MLB's average in the previous decade (40.2).

So--as we note in the title of this blog entry--the one-batter reliever (sometimes referred to by that lamentably juvenile sobriquet "the LOOGY") is not following the carrier pigeon into extinction.

Now just why is this the case? Because, as noted above, the loophole in the rule referencing the "end of an inning" still permits managers to roll the dice with the "face one batter" scenario at certain points--with two outs, mostly; but also with one out and men on, where the pitcher can plausibly have a shot at inducing a double play.

All of that, too, can be measured--but we really don't want to write a long blog entry on this today--too much work to do on our sequel to "The Flintstones" movie, tentatively entitled "Yabba Dabba Do 2"--so we'll conclude with data at least as granular as those stone wheels Fred and Barney used to make spin back in the neolithic age. There's a lot of wonderful, arcane data to be had in this nether region, and we'll get to it eventually. But just know now that the one-batter pitching appearance is still alive and reasonably well, as our last diagram for the day will demonstrate. 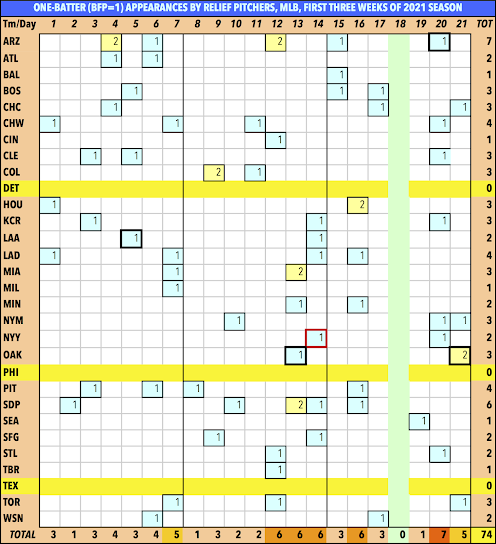 This is the daily log of one-batter pitching appearances thus far in 2021. We have exactly three weeks worth of data to work with--and as you can see, there have been a total of 74 such appearances thus far. These remain daily occurrences (only this past Sunday--4/18, to be exact--did teams manage to go through an entire slate of games without the tactic being employed).

Of course, it is now impossible to employ the one-batter pitching appearance tactic more than once in an inning, as was once the case (Bruce Bochy, former manager of the San Francisco Giants, one of the most prolific practitioners of this tactic, once employed it four times in a single inning). But it remains a popular and relatively prolific practice nonetheless--and successful, too: note the boxes with the extra thick lines, which show us the games where the one-batter pitcher wound up with a decision in the game. The black double box represents a win for the one-batter pitcher in question; the red double box represents a loss. That's right: the reliever record for (the small subset of) games in which one-batter pitchers get the decision is 4-1. (And at some later point we will show you that this is actually not a small sample size fluke...)

There were 205 one-batter pitching appearances in April 2019. Right now we are on pace for 104 of these in April 2021. So the rough estimate we saw early, that the rule change has caused a 50% drop (as opposed to the 100% that some alarmist--they know who they are!--were suggesting), seems to be on target. Only Texas, Detroit and those phabulous Phillies are--thus far, at least--attempting to go the way of the saber-toothed tiger. Come on in, guys: the one-batter tactic is still as wet and wild as ever...

Posted by Near-Genius Nephew at 6:00 AM