Given the omnivorous direction that baseball is taking as it becomes both a home run derby and a cattle call for a bunch of hulking men formerly called relief pitchers, it is probably fitting that the 2021 season opens tomorrow on April Fools' Day.

As all that gets underway amidst many lingering uncertainties (including whether or not the Hall of Fame can take a cue from "Georgia Peach" Brian Kemp and suppress enough votes to keep Dick Allen out of the Hall of Fame indefinitely...) we thought the best way to get into the spirit of things would be to take a look at just how recent this "home run hypertrophy" really is.

And, as you'll see, it really is quite recent, much in the way that racism joined with fascism in America in what ought to be a suicide pact but for now is still working on divesting itself of its lingering sympathy for the devil. It doesn't appear that baseball is anywhere near that precipice yet--it will probably find a cliff of its own from which to hurl itself a bit later in this coming decade...

This led to...well, you already know what this (has) led to--research, followed by remorse and regret. As Sidney Greenstreet (should have) said, "We need to know what we need to know"--and, as the table below shows you, we needed to know that teams have hit 50 or more HRs in a month a total of 85 times in MLB history. 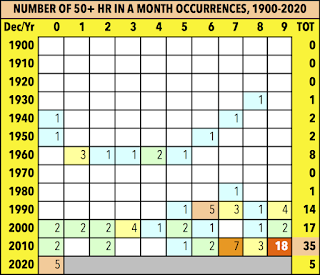 The distribution of these 50+ HR months is likely to give (at least some of you) pause. For what the chart depicts is the fact that of these 85 50+ HR months, 71 of them have occurred since 1995. That's 84% of the total occurrences in just the past 25 years.

And it gets worse. In tandem with Trumpism, what we've taken to calling "mastoid homeritis" manifested itself as an acute symptom in 2017, took a breather in the backstretch the following year, and returned in full virulence in 2019, providing a premonitory pandemic of 50+ HR seasons the likes of which had not been seen since the Dark Ages. 18 incidences of "bubonic tateraphasia" were noted in 2019, where flying bats became so rabidly prevalent that they jumped the shark and started a worldwide scourge.

Clearly, of course, this phenomenon has been building since the mid-90s, but seemed to have been held in check as late as 2016. Since then, however, there have been 33 such incidences, a total comprising nearly 40% of all known occurrences of "amyotrophic launch angle sclerosis." [Note that the first incidence of ALAS occurs the year before Lou Gehrig's tragic ALS diagnosis--a coincidence? Our pseudo-scientific raised eyebrow is frozen in place...]

Of course, some of you (including the unbelievably chipper Ms. Langs) want to know more about the contours of all this, convinced that by wearing those paltry (but pesky) masks you will not be infected by a contagion that would have made Abelard swear off Eloise (literally) for life. So we donned our hospital greens, took the obligatory big day of losses at the track fueling the betting habits of Vince Edwards (also known as the "neurosurgeon of nags") and compiled some details that you may find morbidly fascinating. 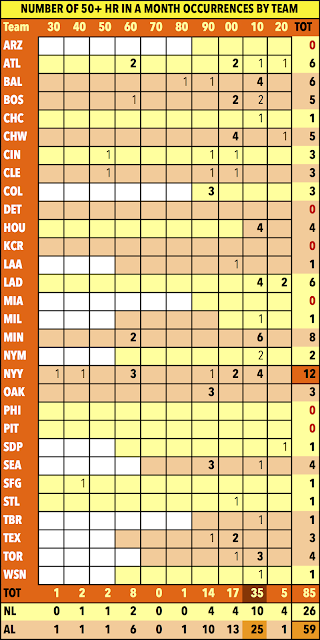 We looked at which month the 50+ "bug" took hold. Since the chart for that is lengthier than the amount of comic material we can possibly invent to fill up the required space to display it, we summarize before punting on third down: the most favored month for 50+ HR incidences is August, with 27 (nearly one-third of the full sample). The rest of the months are virtually identical: September (which includes regular season games in October) has 14, May and July each have 13, June has 12. April has only six, but this makes sense because baseball wasn't always brazen enough to start its season on April Fools' Day.

So the other chart we will actually display here (and that is running along the right side at this very moment!) relates to the reference in our titles, as you'll see shortly. What you are looking at is a breakout of 50+ HR months by team, which is compiled by decade beginning in the 1930s (recall that the first 50+ HR month occurred in 1938, and was accomplished by--that's right--Lou Gehrig's Yankees).

And so you won't be surprised to discover that those Bronx Bombers have the most such months, with an even dozen. You will probably follow us in an eyebrow-raise about the #2 team: those ever-mischievous Twins, who set a record of their own by having five 50+ HR months in the same season in 2019.

Trailing the Yanks and Twins are three teams (Braves, Orioles, Dodgers) who each have six. The Dodgers and Twins have the most incidences in the past eleven years: six.

This chart shows the major culprits (or carriers, if you want to stay "clinical" about it) in bringing about this pandemic of Mister Potato Head baseball in the past quarter-century. And keep in mind that while 2020 had only five such incidences of 50+ HR months, they only had two months to work with. Unless someone has surreptitiously loosened the seams on the baseball while we were sweating out the winter of Trumpublican discontent, we're likely to see at least a dozen such incidences in 2021 (barring any interruptions in play, of course.)

Note also that this has been a predominantly American League phenomenon, as the breakout at the bottom of the chart makes clear.

And finally--why is the "50 Homer A Month" club void in five states? Well, there are six teams who've yet to have a 50+ HR month. Reading from the top of the table: Diamondbacks, Tigers, Royals, Marlins, Phillies, and Pirates. So the club cannot "incorporate" in five states: Arizona, Michigan, Missouri, Florida and Pennsylvania. (How about that? Four swing states, and the "purported home" of Josh Hawley.) Let's let the homer suppression begin in those beleaguered locations, shall we?

Posted by Near-Genius Nephew at 10:14 AM