PAYING HOMAGE TO THE BISON 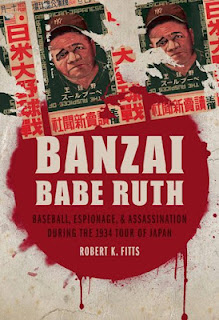 Dave Davis, our long-time supporter (don't get weak in the knees now, Mr. D., it's way too late for that!!) has always made his mark as a thoughtful observer of baseball lore and literature--when you see his name attached to an article, you can take it to the bank that it'll be several cuts above what's surrounding it.

His latest, appearing today in the New York Times, reminds us how much we have to be thankful for with a new baseball season upon us. However, it's not a flowery paean to the game itself. Instead, it's a tribute to a university press in the dead center of the country whose efforts on behalf of baseball history deserve our heartfelt thanks.

That would be the University of Nebraska Press, to be precise--a publishing operation that is also known by the colorful monicker of Bison Books--whose efforts on behalf of baseball history, literature, and lore have been slowly accumulating since 1991, and now number over one hundred titles.

We won't try to list all of them here, of course, but we'll simply toss up a few images of the more recent titles that will show you the range of what Bison Books provides in the tiny (but vast) realm of baseball.

Only a venue such as Bison Books would invest itself in the incredible efforts of nineteenth-century baseball historian David Nemec, wrapping up a four-decade commitment to an archaeological project as sweeping as any of those where shovels are required equipment. While it is true that participating in a historical simulation league with Mr. Nemec may prove hazardous to your mental health, the 1200+ pages he has put together are as astonishing as the era when the pro game was new.

If you haven't spent time (or money) with Bison Books' baseball library, you will forever be behind the curve, late on the fastball, and fooled by the change-up. Thanks in large part to their efforts, we are in the golden age of baseball books. Long may it continue...
Posted by Near-Genius Nephew at 10:15 PM