It was the best of times, sure--at least in New York, where their worst of times involved the absence of a National League team in a pennant race for more than a decade--but the 1969 Mets had to overcome a significant handicap in September that threatened to scuttle their chances at pulling off their Miracle. 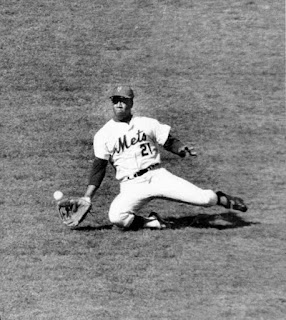 As they surged (and as the Cubs began an agonizing September swoon), the Mets suddenly were without their best hitter--Cleon Jones. Nursing a bad leg for several weeks, Jones had missed several games in September (as the Mets made their first move into first place in the NL East) and finally had to be sidelined after the game of September 11th (a 4-0 win over the first-year Expos).

The Mets were now two games ahead of the Cubs, but they were going on a road trip to play the resurgent Pittsburgh Pirates and St. Louis Cardinals--and without their best hitter, things could go off the rails rather quickly if Mets' pitchers could not keep the Bucs' bats quiet.

Of course, as we know now, they were able to do just that, sweeping a Friday night "twi-night" doubleheader by identical 1-0 scores, with the only runs driven in by Mets' starting pitchers (Don Cardwell and Jerry Koosman). They won the next day as well, thanks to a grand slam from a suddenly resurgent Ron Swoboda (forced into full-time play due to Jones's injury). They lost on Sunday, but Swoboda hit two HRs off Steve Carlton the next evening in St. Louis, negating a 19-K performance from the great lefty and bringing the Mets a 4-3 victory.

By this point, the Mets were up by 4 1/2 games, and with the Cubs showing no signs of rallying, they were able to absorb a Shea Stadium ambush by the Pirates (including Bob Moose's no-hitter on Saturday September 20), and their doubleheader sweep against the Bucs the next day began a nine-game winning streak that quickly led to the NL East crown. (Today, in fact, is the 50th anniversary of the clinching game, when the Mets struck quickly against Carlton en route to a 6-0 win and the serial destruction of the Shea Stadium playing field by fans possessed with terminal delirium.)

So how did the Mets do in the fourteen games played between September 12-September 23, fourteen games where their best hitter--Jones--was unavailable save for a single pinch-hit appearance? As the pitchers' chart (above) shows, they went 10-4 during this stretch, with Koosman and Tom Seaver notching three wins apiece. Cardwell was also stellar in this period, notching two wins. And Tug McGraw became the Mets' ace reliever in this stretch, winning two games and pitching more innings (12) than the other six Mets' relievers combined.

Note that the Mets' hurlers allowed just 3 home runs over these 14 games and 127 innings, a feat unthinkable fifty years later. 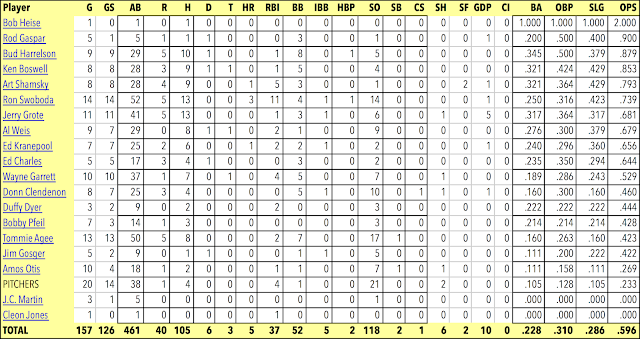 How about the hitters? Well, they did they best they could, as their chart (above) demonstrates. Solid hitting from Art Shamsky (this was his .300 BA season, after all), along with Ken Boswell (a proficient second half), and mighty Mets' mite Bud Harrelson (.500 OBP in this stretch) certainly helped. 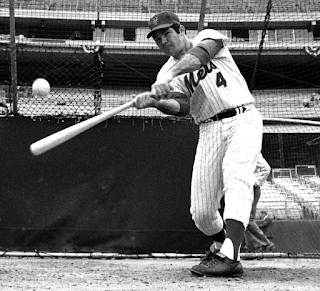 But it was Swoboda who did much of the heavy lifting (as noted above). Over this stretch, Swoboda hit three of the five Mets' homers and drove in 11 runs, including several more clutch hits beyond the ones noted previously. With Jones out, Tommie Agee in a tailspin (.160 BA, .423 OPS) and Donn Clendenon also mired in a slump (.160 BA, .460 OPS and no RBI), Swoboda was the only right-handed power that the Mets had going for them. He came up big, and deserves as much credit for their success in this crucial stretch of the schedule as Seaver and Koosman.

More heavy lifting from the Mets' righty hitters would be needed in the World Series, and they received it (again) from Swoboda, with big help from Clendenon (3 HRs) and Al Weis, who saved his best shot for last, hitting a game-tying HR in Game Five as the Mets did the unthinkable. We will probably never see anything quite like it ever again...


Posted by Near-Genius Nephew at 3:23 PM