FAWNING OVER FREDDIE...AND A NEW WHACK AT WAR

Is Freddie Freeman really a first-ballot Hall of Famer? Is he already a shoo-in for the "front door" at Cooperstown? That's the underlying drift in the endlessly fawning media coverage of Freeman's exodus from the Atlanta Braves that erupted once the baseball lockout ended and various franchises took up where they'd left off prior to "Manfred's folly."

Freeman is a fine player, and by most accounts an honorable fellow--apparently the type of "classy white guy" who becomes a lightning rod for the schizoid tendencies of the current baseball media, alternately fixated on microanalysis of contract values in an ever-fraught free agent chess game while in search of some "pre-Raphaelite" (or is that "pre-Rafaelite"?) vision of a game where superstars remain betrothed to one team for an entire career. 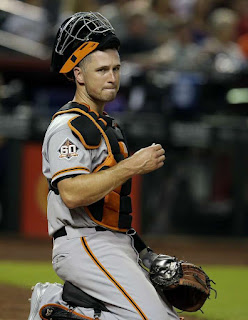 Which is a consummately strange notion to obsess over...but welcome to America, now as then, when "then" wasn't "then" either. The greatest players rarely remained with one team throughout their careers, but such doesn't seem to matter when meta-cynicists suddenly wish to be post-cynicists. But it's too late for that, guys and gals...

We saw what might have been a stronger variant of it with Buster Posey, who jumped rather than get pushed, taking early retirement on a (possibly subliminal) bet that three World Series titles and a career at a position that is more forgiving in terms of career length and offensive performance level will carry him in through the front door at Cooperstown.

Freeman's negotiations and his move to the Dodgers may have a backlash in terms of the momentum he'd built up from a fine career through age 31, an MVP award (thanks to a 60-game hot streak in 2020), and a semi-fluky World Series win in '21 by his now-former team. But for now, there is a dreamy kind of rapture whenever his name appears in print, or passes from the media's lips: Freddie has become a hulking figure enveloped in the vast mists of an inchoate nostalgia.

Of course, nowhere in all of this has there been any kind of attempt to put Freddie in context with the other high-achieving first basemen in baseball history. So let's do that here--and let's also use it as an opportunity to take another slice out of Wins Above Replacement (WAR). This was a perfectly adequate tool when Brock Hanke advocated for its use in his 1989 version of the Baseball Abstract (a license that was rescinded quickly when Bill James' business associates convinced him to help them concentrate their fire against the Elias Baseball Analyst by marginalizing Hanke's effort).

Brock never expected or wanted WAR to "evolve" past a calculation of a player's value in the context of a single year, but the stakes were raised when the neo-sabe movement looked to systematize via an unholy alliance of mathematical modeling and MBA-style economics. James himself entered the fray with his Win Shares method, geared to reduce measurements of historical "greatness" into a single number. In both cases, an overwrought superabundance of ingenious (and simultaneously dubious) calculations was put in service of results that were variously egregious oversimplifications that, in actuality, moved about half a step beyond the league-relative measures created by Pete Palmer and John Thorn in Total Baseball.

These days, Bill James is at war with WAR, and the Anti-Christ of sabermetrics (the man we've named a devilish dessert after...) is defending it with sociopathic feints and incomplete, self-serving "histories"--all in all, a truly pathetic sight that is definitely a slow-motion train wreck. But the basic calculation for offensive performance in WAR--refined in the late 80s in Hanke's precursors to the Big Bad Baseball Annual from a Pete Palmer formula--is still a reliable measure when used in isolation from the balance of the detritus superimposed upon it. That is what we'll start with to place Freeman in context with other top-notch first basemen.

We're going to give you the whole chart, with everyone on it, including the portion that will give us some insight into whether Freddie will make it into the "elite" area of "front door inductees" or not. It's a two-pronged table, showing the offensive WAR, the OPS+ and the criminally overlooked rate stat version of OWAR that we call WAR/650 (or the OWAR per 650 plate appearances) for first basemen through the age-31 season (the one that Freeman just completed). That's the left side of the table: the right side shows you what these self-same 1Bs did from age 32 on. 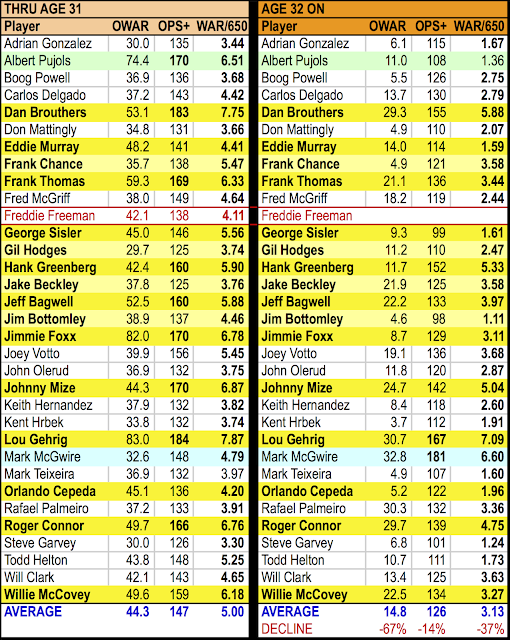 We're cheeky here, and have ordered the table by the first baseman's first name, but we'll try to play as fair as possible otherwise. The names in "rich" or "deep" yellow are the front-door Hall of Famers; those in paler yellow are the "side-door inductees" (the various "vet" committees). The name in green will get in five years after he retires; and the man in blue is simply screwed.

Freddie has a nice total of OWAR through age-31, but the reason for that is that he began earlier than many of his fellow first sackers and has accumulated the sixth highest number of total PAs through age 31. When we look at his OPS+ compared to the overall average of first baseman up to age 31, his value of 138 is good but below the overall average of the list (147), and well below the average of the "front-door inductees" (163).

On that list of "front-door inductees" there are two anomalies (guys whose OPS+ and WAR/650--the rate stat version of OWAR are significantly below average): Eddie Murray and Orlando Cepeda. Freeman has more in common with these two than any of the other "front door" types. (Murray and Cepeda, like Freeman, came up at young ages and also rank high in PA's through the age of 31-- Eddie #3, and Orlando #4.)

Murray, of course, hung on just long enough to hit 500+ HRs when that measure had not yet become common enough to fall victim to "meta-cynical" analysis; Cepeda's early career, plus his MVP season with a World Series winner, boosted his image and just barely got him in via the front door.

When we look at the "decline phase" (age 32+), we can see where OWAR the counting stat simply self-destructs. Because first basemen who stop producing solidly above-average OPS+ numbers are quickly put out to pasture, the raw OWAR numbers reflect a more catastrophic decline than is actually the case. OWAR values compared between "up to age 31" and "age 32+" decline amongst these top-shelf hitters at a rate of 67%, whereas their OPS+ performance drops only 14% (also distorted in the other direction due to the "quick hook" replacement phenomenon at the position).

The WAR/650 values show us a "middle way" for measuring decline, pegging the results at a more reasonable 37%--still marked, but not as catastrophic as the distorted counting stat measures intimate. Given that big-hitting first basemen during the "offensive explosion" period of the free-agent era were often among the biggest salary beneficiaries and later turned into contractual albatrosses for the teams that signed them, this became one of the primary cautionary mantras in the post-neo-sabe age. All of which probably exacerbated the backlash in recent years to this phenomenon, which in turn became another retarding factor in salaries--and almost certainly dovetailed into disputes over the last decade that led up to the recent lockout. (Ironic, n'est-ce pas? But then again we are not quite past the "meta-ironic" age...)

We have some other charts that further anatomize this "decline phase" distortion that occurs when the counting stat version of WAR is employed, but we'll save those for a future battering ram against a tool that has been subject to escalating misapplication in the field over the past twenty years. Less controversially, the above data strongly suggests that Freddie Freeman, a fine player who belongs on a list of the top-shelf first basemen in baseball history, is not (as of age 31) a "front door HOFer" and will need to exceed the average WAR/650 of his fellow first sackers after the age of 32 to carry himself over the threshold.

Posted by Near-Genius Nephew at 8:39 PM