We've been messing with more of our "bathtub gin" versions of team prediction/projection tools, piggybacking off a weighted average of the various player projections that are floating around in the Internet ether. 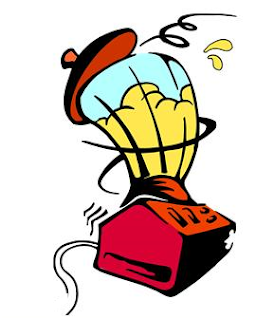 It's all educated guesswork at best, and translating some kind of playing time estimate for close to 900 players is something that could take months without producing anything more than a greater level of intricacy in the guesswork, so what we do is get weighted averages for the hitters and pitchers, establish the rate stats (OBP/SLG for hitters, ERA and WHIP for pitchers), estimate park factors, whip into the old BBB blender, ultimately producing OPS+ and ERA+ estimates for each team.

With those estimates, we then have a couple of formulas that translate these into a projected win total. (We have to fudge a little bit, since we try to set the baseline at 100, which varies from how it's done by our old pals at Forman et fil, who leach out pitcher batting from their OPS+ calculations.

The question you may ask is: why not just use a direct Pythagorean WPCT (PWP) method by estimating the runs scored/runs allowed. That would be fine if we knew what the run scoring level was going to be in the upcoming season. We don't know: in fact, no one does. So we stop short of trying to estimate that, and just rely on the league-relative components. Frankly, these tend to distort a bit on the extremes as compared with PWP; one of these years, when we have a little more time, we have several ideas about how to factor in some supporting data that will minimize that from happening. Most of the time, however, it doesn't really come into play. 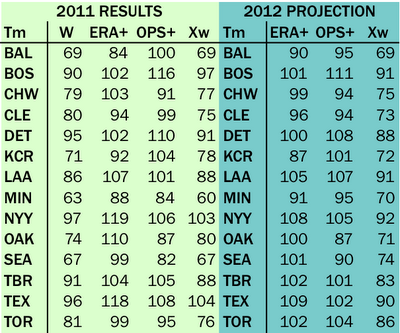 So, after all that, let's look at the projections for the Half-on-a-Limb League-Relative Component method, bathtub gin Version 1.01. What you see in the 2011 data on the left side of each table is the converted OPS+ and ERA+ for the teams. These have been adjusted from the Format et fils data to allow our formula to add up to the right number of league wins (if we'd used theirs, that would not happen).

As with the PWP data, our "Xw" (Expected win) total for 2011 varies from the actual win totals. These variations, and their direction from actual wins, are generally similar to the PWP data, though they tend to produce a somewhat higher overall deviation. 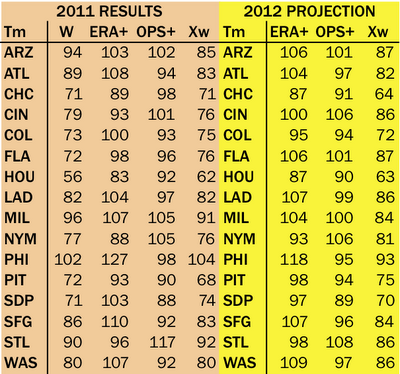 Since the method of arriving at the estimates is a weighted average of several other systems, it tends to push things a bit toward the middle. This shows up in the AL Xw estimates for 2012 a bit more strongly than usual. There is only one team projected to win less than 70 games according to the BBB "blender": the Orioles. And there's no one projected to win more than 92 games.

It's a similar situation in the NL, where only the Phillies (at 93 wins) are projected to crack the 90-win barrier. This makes for some tight divisional races: the Cards and Reds are predicted to win up in a dead heat in the NL Central, while the NL West shapes up to be a close fight between the D-backs (sliding back a bit from last year) and the Dodgers (kicking up a notch or so from 2011).

We're not suggesting you take this to the bank, but we think it's interesting enough to work on the formulas more (particularly by using historical data to look for any deviation patterns that can be discerned and then taken into account). And it's a reasonable opening benchmark for a periodic revisit during the upcoming season: we'll come back to this every six weeks or so. Stay tuned.
Posted by Near-Genius Nephew at 4:15 PM