Over at his site, Bill James is in the midst of what will be likely be a book devoted to a revamped version of his fielding method for Win Shares. Aside from Bill's valiant attempt to demystify and critique the work of those who've made overly aggressive claims about matters with the glove, it's fascinating to see how the people "on the inside" are jockeying for position. (We'll get to that in a bit.)

Bill is revising a series of models and value assessments about the various fielding positions, and there are some fascinating data perspectives that he's worked up as he attempts something like his own "big data" approach. (Not play-by-play data, but a more comprehensive agglomeration of traditional fielding data than what's been either envisioned or attempted previously.)

From looking at where he's at right now (up through first basemen), several things seem likely, and they  will be make for improvements in the earlier work. It's likely that the new method will at last rectify the ongoing modeling error that virtually every major fielding system has replicated--an exaggeration of the centerfielder's actual contribution to outs made. That should reduce the overall number of Win Shares assigned to that position. And this will help to eliminate a whole series of distortions that enter into other ranking systems (if those folks will pay attention to what's being said, that is).

It's also likely that Bill will stop short--in fact, not even mention--what is (and has been for some time) our view of what the most important missing factor in refining defensive evaluation. What's that? Simply, it's measuring how far fielders have to go from where they are positioned to get to the ball.

Now, clearly, one reason why Bill will at best only mention this in passing is that he wants to create a system that permits some kind of historical comparison, and the measurement above is simply not something that could be done without post-modern technology. It's clear that Bill is pretty much abdicating this aspect of things to the technocrats, who (unfortunately) are quite unlikely to ask the right questions about how to collect this data.

If that data is collected properly, we will know much more about the effective defense-to-pitching ranges that exist but can't currently be measured. We'll know more about such concepts as "pitcher luck" because the distance to ball data will tell us much more than the overrated BABIP stat does.

But likely the biggest battle that will come up in this new discussion, and one that is already underway from the ongoing chatter (including side conversations at the gathering place where the Tango Love Pie™ continues to bake...) has to do with what the effective range between the best and worst fielders at a position is. In his current work, Bill suggests that this range is much lower than virtually everyone else in the field. That has spawned some dubious modeling exercises elsewhere that try to force-fit a link between the gap in best-to-worst and the overall modeling inference about the overall importance of fielding in run prevention.

Those models are ideological holdovers from earlier, flawed representations of data and they persist in the thinking. The flawed result is that the effective range from best to worst is accepted as existing across all teams, when that gap is mitigated by the fact that in real life, team defense is never existing at anything like the individual positional extremes. In short, if you think there's a 25-run difference at a position, you can't just add up the seven positions and claim that the effective impact range for team defense is 175 runs. You have to have temper that "greatest possible gap" to reflect that no team--even using a team-based method that builds in the assumption that bad teams have lousier fielders (an assumption that is a modeler's compromise), there's no way that even the worst team can have all of the worst fielders on the list. It would be tantamount to multiplying your replacement level value seven times and then applying it to the data set--the result would be to make the fielders look far worse than is actually the case.

It's clear that the answer about the "effective quality range" for teams as a whole is at least half of what the "additive approach" claims. It looks like Bill's method overcorrects a bit for this, and the early chatter suggests that this discussion will become one of the key skirmishes in the ongoing "Fielding Wars."

At any rate, it's good to see Bill focusing himself on these issues again--and it's also heartening to see our old pal Charlie Saeger, who was actually ahead of the fielding curve in the late 90s when his Context-Adjusted Defense (CAD) method (one of the proudest moments in the flamboyant history of BBBA) shifted the ground on which these discussions originate, right in the middle of the ongoing responses, providing his usual tongue-in-cheek sanity check.


Posted by Near-Genius Nephew at 9:20 AM

THE ART OF BASEBALL HISTORY AND ITS PRACTITIONERS

GOOD news and a wonderful discovery are what's prompting us to dig out of our mid-winter baseball lethargy and fire up another exercise in "blogolalia." 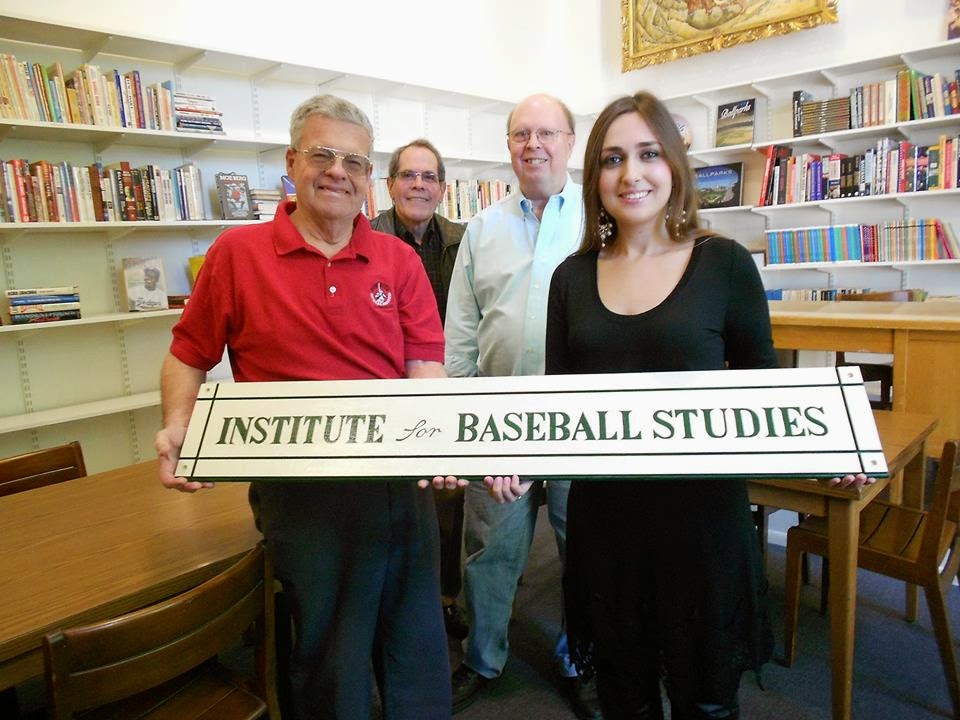 The good news is that Terry Cannon and his minions at the Baseball Reliquary are now ensconced in a permanent home. Later today, at Whittier College, the Institute for Baseball Studies will get the proverbial bottle of champagne cracked over its doorknob and there will be a physical location for those  enamored in the art of baseball history to visit in search of whatever form of baseball enlightenment they profess to seek.

You are all encouraged to visit the Institute's Facebook page and join their community. As you'll see, there's no shortage of content to be found there--and when you arrive at the Institute, you'll find a key resource that automatically makes them into a destination: the papers of peerless baseball historian Paul Dickson.

This is truly the beginning of the next phase in the life of the Baseball Reliquary and its associated activities on behalf of "the art of baseball history." 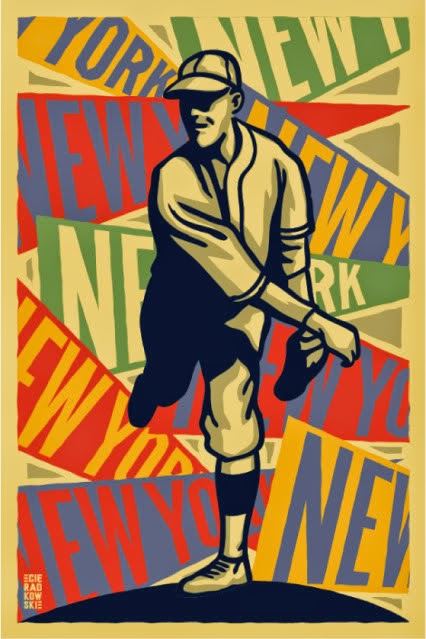 IN the midst of this, that "wonderful discovery"--a singular blog presence that embodies "the art of baseball history" in ways that parallel--and, perhaps, augment--the work of the Baseball Reliquary.

Artist/designer/historian Gary Cieradkowski, in a humble, unassuming way, has staked a claim as one of the great practitioners of the "art of baseball history" with his Infinite Baseball Card Set. The blog is an ongoing creation of a very unusual, highly eclectic collision of baseball lore and Gary's own immense skill as an artist/poster designer.

Thus far, there are 184 entries in
what could indeed be an infinite baseball card set--where hidden lore and the romance of early baseball (when it was a good bit more liberated from the mass-media manipulation that has come into being over the past half-century) can blissfully coexist. 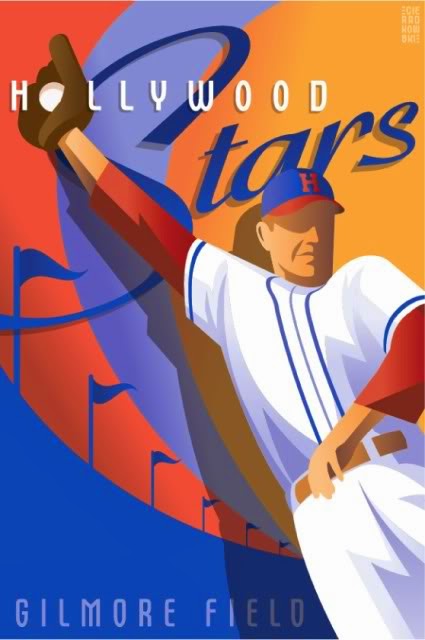 Cieradkowski combines history and art in a uniquely entertaining way: his love for the lore and for the odd details of individual lives and unusual events is exactly what "the art of baseball history" is all about. He is mining territory similar/adjacent to what "reformed sabermetrician" Craig Wright has been doing so well for many years, but the added dimension here is the visual accompaniment. The cards (and Gary's baseball poster art) all straddle a fine line between referencing baseball's primordial "design sense"--the pre-Art Deco conventions of early twentieth-century commercial photography and his own bold-but-subtle updating of that style, as can be seen in two examples of his poster work.

Hours of entertaining forays into unknown stories, or unusual takes on familiar ones, can be found at the blog. (His most recent entry, tracing the story of the mysterious pitcher who made it safe to be mysterious--Fred Mitchell "Mysterious" Walker--is a full meal disguised as a treat.)

Even though it's criminally old-fashioned to say so, it really ought to be a book--a big, bright book of baseball love that can sustain and console the desolate baseball fan during the winter interregnum.
Posted by Near-Genius Nephew at 10:12 AM

The lingering talk of a massive BBWAA clusterf*ck is going to have to drift into other topics: today's Hall of Fame voting results plowed through three first-time candidates (Randy Johnson, Pedro Martinez, John Smoltz) and elected Craig Biggio (who missed in '14 due to a couple of hanging chads), while putting Mike Piazza (just under 70% of the vote) in position to appear on the Cooperstown dais in 2016.

This year's election was the first time in sixty years that the BBWAA enshrined four players on a single ballot. The four who made it in 1955: Joe DiMaggio, Dazzy Vance, Ted Lyons, Gabby Hartnett.

We are still astonished at the across-the-board support for Smoltz, who by rights should be drawing support somewhere between Curt Schilling (who wound up with 39% of the vote this year) and Mike Mussina (25%). As noted earlier, we can only conclude that a narrative of success penetrated the collective unconscious of the voter population (cynics may wish to issue an apology to Carl Jung on my behalf).

Smoltz is, of course, deserving, but he really must be seen as one of the more curious anomalies in the often-vilified BBWAA voting process.

For 2016, we anticipate two inductees: Piazza and first-time candidate Ken Griffey, Jr. Enough ballot clearance might also permit Tim Raines and Jeff Bagwell (each with about 55%) to make significant strides with BBWAA voters.

There was very little movement in the voting percentages for Barry Bonds and Roger Clemens, and it remains clear that the Hall of Fame's action to slice off ballot time is indeed an odious effort to remove them from view just as soon as possible.

But, hey! Congrats to the new inductees. We suggest that those who wish to honor them in person this summer do so, but refrain from spending any money at the Hall of Fame itself. The organization deserves to be punished as much as the players deserve to be honored.
Posted by Near-Genius Nephew at 11:32 AM