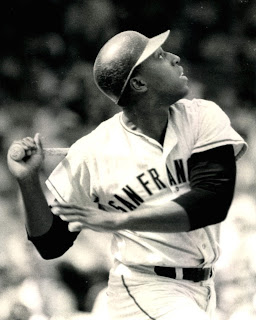 Willie McCovey's passing reminds us of those paradoxical times when people thought it was amazing when a ballclub had four players who could hit 20+ HRs a year. (Examining that phenomenon as it existed in the four decades in which McCovey played is not part of this post, but it'd make an interesting follow-up...we'll try to remember to do that.)

What we're here to do today is a bit different. We want to examine McCovey's peak, which was a bit later in manifesting itself than what is usually characterized by sabermetric theory. (Truth told, peaks built around single seasons, such as the age 27 shibboleth, are ultimately not very useful--either for predictions or evaluations. We need more years, and we need to see peaks in the context of some number of years.)

And so, here, we're dusting off one of our favored "flavors of peak"--the six-year version. We require that a player collects at least 2500 plate appearances over those six years to be eligible to appear on a peak list--for which we resolutely (read: stubbornly) sort it by the old-school, "highly flawed" OPS+.

OPS+ is flawed, but what isn't? "Better" measures quickly become far too wonky and don't provide significant advances in understanding offensive ability--which is 90% responsible for the selection criteria involved in Hall of Fame arguments. (The other 10% are what people spend countless hours chasing their tales about.)

So, a useful basic approach to evaluating a hitter's historical achievement can still be found in OPS+, which is league and park adjusted--the basic and useful necessary adjustments. And, as noted, six-year increments give us a benchmark for how well a player can sustain a "peak" performance. When measured against all the hitters in baseball history, it's both illuminating and meaningful.

Most of this is driven by the three great seasons he had in a row from 1968-70, where his aggregate OPS+ tops out at 188. But the seasons surrounding these, particularly the years from 1965-67, weren't exactly chopped liver: McCovey's OPS+ for those years was 159. The backside (1971-74) was lower, but not that much lower (148 OPS+). All of that, and the forces of age as they impose themselves upon hitters, explains McCovey's continuing lofty position in the six-year rankings all the way out into the age 31-36 range.

And regarding the Hall of Fame, it's instructive to look at the leaderboards for six-year OPS+ to get a sense of how many hitters with lofty rankings over these "half a HoF" snapshots wind up in the Hall of Fame. We won't do anything systematic with that here--but let's look at the age 27-32 range with respect to who's in/out of the HoF.

The guys in the Hall are the ones in white type. As you can see, 21 of the Top 30 guys on this list have been inducted. (Several others ought to be inducted eventually--Barry Bonds, Miguel Cabrera, Manny Ramirez, Albert Pujols. And we can always hope that the Vets Committee--or whatever they're calling that overdetermined clump of misdirected ersatz lobbyists these days--will see fit to put in Dick Allen before he dies. That would bring us up to 26 out of 30.)

Rights, wrongs, and rants notwithstanding, we can see McCovey here at #10, where he's in fine company. RIP, Willie...


Posted by Near-Genius Nephew at 9:43 AM