Max Scherzer's 20-K performance against his old team (Detroit Tigers) got us to thinking about ways to examine the number of games where pitchers strike out more men than innings pitched.

We decided to eschew (now there's a word you don't hear every day...) the "double-digit" approach, though we wanted to incorporate those games into the mix. 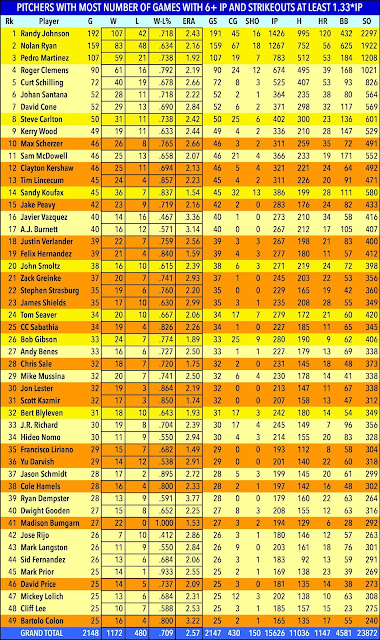 So we decided to query things up at Forman et fils by looking for games where pitchers had lasted at least six innings into the game and had a K/IP ratio of at least 1.33.

And when we ran the query, we were interested to see where Scherzer ranked. We figured he would be reasonably high up on it.

But we really weren't prepared for what we found.

No, Max isn't at the top of the list. Far from it. But as of Wednesday, after his 20-K night, he did rank in the Top 10. (As we write this, he's now tied for eleventh, since Clayton Kershaw just fanned 13 and has moved into the tenth slot all on his own.)

What is really astonishing is the number of such games racked up by Randy Johnson. We figured on Nolan Ryan being at the top of the list. He's second, but Johnson's 192 such "big-K/IP ratio" games is way ahead of everyone else. He flew by Ryan and never looked back...

Pedro Martinez is a distant third with 107 such games.

On our table, the color coding is as follows: orange means still active; rich yellow means HOFer; pale yellow means no longer active and not (yet, at least) in the HOF.

As you'd expect, big-K games produce a great deal of success, as a .709 WPCT attests. Johnson's 107 wins in such games is also a record--one that no one on this list looks like they are going to approach.
Posted by Near-Genius Nephew at 12:00 AM