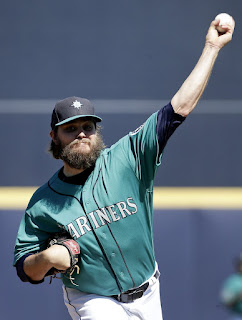 CG #6 was not one that could have easily been predicted, for several reasons. First, lefty Wade Miley (who'd been a bust for the Red Sox in '15 and was shipped to the Seattle Mariners for another problem lefty,Roenis Elias...) had not pitched well in any of his starts thus far in 2016. Second, he was facing the Kansas City Royals, who had actually shown a pretty good knack with lefties in 2015.

That proved not to be operational on April 30 at Safeco Field, however, as Miley became the sixth pitcher in 2016 to go a full nine innings, scattering five hits in a 6-0 M's win over the defending World Champs (and yes, we pinched ourselves three times as we wrote those words).

Miley was not throwing heat past the Royals; he fanned only four, and continued to give up line drives and fly balls at an elevated rate...but the generous dimensions at Safeco and a couple of nice plays by CF Leonys Martin boosted him at key moments.