Let's take a look at the early returns regarding "non-save situations," a widely unheralded stat breakout pioneered at Forman et fils which we've written about before in order to defend the value of  component won-loss records, particularly for relief pitchers.

First, remember that this little-known category isn't quite a zero-sum thing, which rankles most analysts (whose crypto-Newtonian view of the baseball universe really depends on such a notion being the only way to look at baseball "reality") and explains why they prefer to ignore its existence.

"Non-save" decisions always add up to a WPCT that is higher than .500, which some dismiss as merely being further evidence of the uselessness of W-L records in general, but in reality show us that there are more orderly forces at work underneath the seeming chaos (as our studies show, good teams strongly tend to do well in this category).

And when there are aberrations in the data, particularly early in the year (as is usually the case, with 2016, as we will see in the chart at left, being no exception...), the extreme discrepancies that we see in partial-season data clearly have predictive value.

Just eyeballing the W-L records and ERAs of the in-process 2016 team data for "non-save situations" shows us that the better teams perform overall in the various subsets of the game where the relative score is most often a tie game, the better their winning percentage in such situations tends to be. 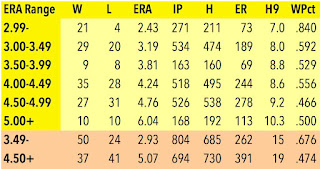 And seeing the especially good W-L records of teams whose overall ERA performance in "non-save situations" is not similarly above average (as we can see is the case with the Phillies and the Rays) is a likely indicator of teams whose overall won-loss records will be dropping once the anomalous good fortune they've thus far received falls away.

As a reminder of this, we print the overall won-loss and ERA data for "non-save situations" thus far in 2016, sorted by ERA (shown above at right). The summary data in orange shows how this all breaks out based on overall performance level in this category. (Remember that average WPCT in "non-save situations" is around .560, as opposed to .500.) The summary data not shown in orange--the region between 3.50-4.49 in team ERA--shows that this middle range is pretty much dead-on with the overall average (4.14 ERA, .550 WPCT as opposed to the 30-team MLB aggregate of 3.99 and .560).
Posted by Near-Genius Nephew at 8:00 AM