You didn't think we'd forgotten that Max Scherzer actually threw a complete game in his 20-K effort against the Tigers on 5/11, did you? Good gravy, if Max had struck out 20 guys in 8 IP and been pulled for the knee-jerk pitch count overcorrection that, among other things, is surely bringing CGs down into double figures, it would have been all over the sports pages...imagine not giving a guy a chance to own the single-game strikeout record. 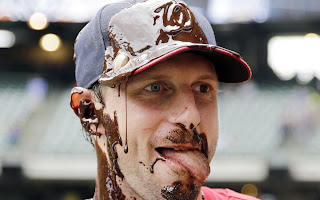 As it was, Max had a chance to set the record, but Tigers catcher James McCann got his bat on the ball on the 0-1 pitch, grounding out to end the game.

Truth told, Max has been pretty erratic this year; he's allowed 11 HRs in just 52 IP, including two in his 20-K game. His ERA is 4.15, and while that will very likely improve, he's not a consistently elite pitcher the way he's been in previous seasons.

And, FWIW, his CG here represents the most runs allowed by a starter-two--in all eleven CGs thus far in 2016. 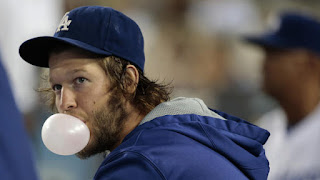 Now, for a consistently elite pitcher, we spin the dial over to Clayton Kershaw, the first pitcher to appear twice on the 2016 CG list, who mowed down the Mets last night with a 3-hit, 13-K shutout. Final score: Dodgers 5, Mets 0.

In the 11 CGs of 8 innings or more (remember, we toss out that bogus 6-inning "CG" from Phil Hughes), the pitchers in question have combined for a collective ERA of...