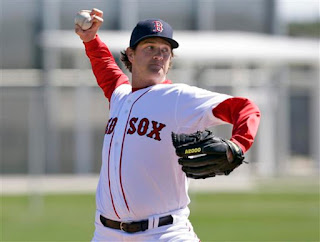 Talk about your "fat pitcher rhapsody"--here is the Red Sox' new 31-year old knuckleballer Steven Wright, who is just a bit taller than the two amigos we profiled recently but is as stout as stout can be (and that means he should really be named Guinness, not Wright).

Anyway, Steven Wright has continued to float above it all so far in 2016, allowing only 5.4 H/9 in his starts thus far, a figure that literally screams "unsustainable!" at top volume, but is nonetheless thrilling to behold in its housing bubble kind of way (assuming you're not buying any mortgages, that is).

Steven's piece de resistance (which hopefully will not presage a swift decline...) was his three-hitter against the Sox' arch-rivals (you know, the Yankees!) in the Bronx. He fanned seven, and lost a shutout with two out in the ninth when Brett Gardner took him deep.

Wright's CG was the first in 2016 where a pitcher actually gave up a run. We knew it couldn't last, and we suspect that this streak of 80 2/3 consecutive scoreless innings in complete games might be a record. We'll check into that one of these days--really, we will.
Posted by Near-Genius Nephew at 8:16 AM