Not quite true that old shortstops never die, but they do fade away. We were prompted to take a look at the data on this when we looked up from our gen-u-wine refurbished Barcalounger™(and the way that thing still tilts despite the intervention of our slightly addled "handyman," the viewing angle was downright non-upright...) to discover that good old Jimmy Rollins is still grinding it out as the (mostly) starting shortstop for the Chicago White Sox. 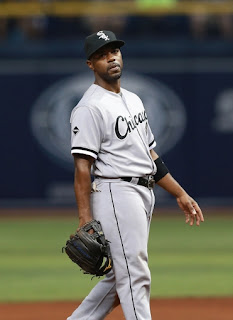 Jimmy is 37 now, and we were curious to discover just how many 37-year old shortstops there have been over the course of baseball history. (And, no we did not conduct the research from the "comfort" of our Barcalounger, since whenever we do that, the blood rushes to our head and you know what that can lead to.)

We thought it would be best to go forward age-wise a bit, just to get some perspective on all this. So we started looking at players who had at least 75% of their games at shortstop beginning at age 33. (Naturally, Jimmy is one of those players.)

And it turns out (as the chart at left shows) that there have been 89 shortstops at age 33 who meet that criteria. These 89 shortstops have had many more than 89 total seasons, of course, because many of them kept playing SS for a number of years to come (think Honus Wagner, Luke Appling, Luis Aparicio, Omar Vizquel, and the favorite of post-neo-sabes everywhere, Derek Jeter). We would add up all of the stats for all of the shortstops who've played at age 33 and up, but we fear that the effect of such a statistical aggregate would inspire some readers to discuss how useless it is to play old players. While there is some merit to be found there, the call for youth in baseball is itself a tired old saw; what we hope to make clear with this data is how rare it actually is for someone to be playing shortstop past the age of 32. 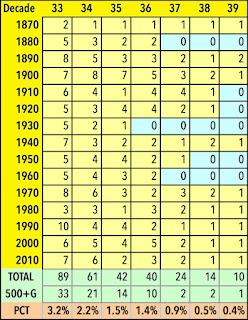 As you can see, those numbers start to dwindle rapidly. At age 34, the total number is down to 61, with only 21 playing 500+ games from age 34 on. There is something of a holding pattern at age 35-36, with the numbers settling in the 40s (total SS) and on just this side of double figures (500+ games) for those years.

It's at age 37--right where Jimmy is--where things take the final downward turn. In each decade across baseball history, it becomes uniformly rare to see anyone playing SS in the 37+ age range. The last time we had two 38-year old SS in the same decade was in the 1970s; it's happened only in two other decades (the 1940s and the 1900s).

So who are the guys who played over 500 games with 75+% of them at SS past age 37? You won't be surprised to discover that we've named them already...Wagner and Appling. It's actually Appling who played 500+ games from age 39 on; Wagner got moved to first base at age 43.

We don't expect Rollins to play 500+ games from age 37 on--his hitting probably won't hold up. But if he stays away from a Barcalounger (the damn thing has been known to fold you up inside it, pretzel-like, when the whim comes over it), he might just beat the odds.

A final note. The percentage of possible starting shortstops who've played at age 33+ is, as shown in the chart, is a bit over 3%. That's a low number. It's fluctuated over time, going as high as 6% in the 1910s and close to 5% in the 1940s, when able-bodied young men were siphoned off to war; it was just 2% in the 2000s, and right now it's just under 4% (that pesky Jeter, of course). So it's probably best if we actually savor these guys, because they really are rare.
Posted by Near-Genius Nephew at 6:07 PM