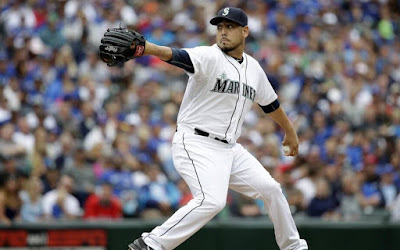 Two fellows we like really could be mirror images of one another.

Lefty Vidal Nuno, despite his exotic name (a strange combination of hairdresser and foreign spy) is actually a U.S. citizen. He's also a chunky southpaw who has a mind-bending 4-19 lifetime won-loss record.

Righty Erasmo Ramirez is from Nicaragua, and it's his birthday today (May 2; he's 26.) He still hasn't managed to get into a game on his birthday, as his team (the Tampa Bay Rays) had an off-day. Physically (5'11, 205 lbs.) he's the Central American version of Fat Freddie Fitzsimmons--and for a nice stretch last year upon joining the Rays, he pitched like the Giant of yore. 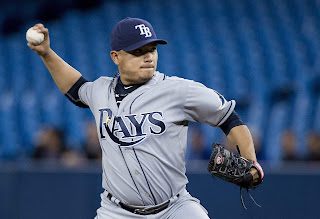 Both began as starters and now are working out of the pen, where their less-than-svelte appearance is more in keeping with the anonymity that usually accompanies being "one of the boys" who sit out in left field trying not to get caught picking their nose in public. Nuno is now toiling for the team that first brought Erasmo up to the majors (the Seattle Mariners), so we can feel good that they are still managing to meet their "fat pitcher quotient."

Neither one of these guys is going to make us forget about the other Fat Freddie, Fernando Valenzuela, but he and Nuno each managed to have a most unfortunate year where they lost 12 of 14 decisions. For Valenzuela, it was the end of the line; for Nuno, it was the beginning of a nomadic time that included another stretch in the minors. 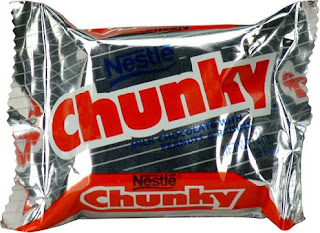 Erasmo nearly pitched his way back to the bush leagues in his first two outings for the Rays in 2015; in those games spanning 5 1/3 IP, he managed to allow 15 earned runs, which works out to a 25.31 ERA. The Rays didn't panic, however, and kept putting Erasmo out there, and from that point until mid-July Erasmo had his finest stretch as a big leaguer, posting a 2.06 ERA over his next 78 1/3 IP and amassing an 8-2 won-loss record.

So far as we can tell, Vidal and Erasmo have yet to appear in the same game, but our big chance is coming up next week when their teams (Rays and M's) will square off in Seattle. Both men are pitching out of the bullpen, and pitching well, so there's a chance that they might wind up in the same game together. Sure, the knee-jerk response is "fat chance," but we say "give the fatties a chance." The teams that have done so haven't regretted it, and for us it will the opposite of regret if these two wind up pitching directly opposite one another next week. Stay tuned!