THE WAY IT CAME CRASHING DOWN

After a baseball evening as unique and unprecedented as the one that millions watched on September 28, 2011, it's tempting to overanalyze, overwrite, overdo the infinitesimal probabilities involved in the just-as-ordered-up-by-the-media congruence of defining events that followed each other with the unexpected, unexplainable drama of real life. (Did I say it's tempting to overwrite??)

What we should take away from such a night is the realization that a whole series of events led up to it, and the purpose of this essay is to summarize and contextualize the month of September 2011, which had a parallel story line in both leagues (a fact that often gets overlooked in the Eastern Cabal's ongoing effort to outshout not only each other but the rest of the country as well).

Let's line up the standings in each league for the principal teams as they stood on September 1.

We've added "Expected Wins" (EW) and "Difference" (D) to the basic data to show a few key points that might be useful for carrying through the narrative. By looking at those, we can see two things: the Yankees were playing a bit under their expected won-loss record, while the Braves (that other team originally from Boston who took a tumble in September) were playing five games over theirs.

Both of these facts ended up being "corrected" somewhat during the final month. (Note, of course, that other teams, in both leagues, were outpacing their expected win totals at the end of August--this tool, as with all of the ones in the analyst's arsenal, is imperfect and incomplete. Detroit, Milwaukee, Arizona managed to remain "above the line.")

Note also that the expected won-loss data at the end of August suggests that the Red Sox were legitimately a .600 team. What happened to them in September (as shown in the full standings for the last month--both AL and NL are shown below) shouldn't happen even to one's worst enemy: 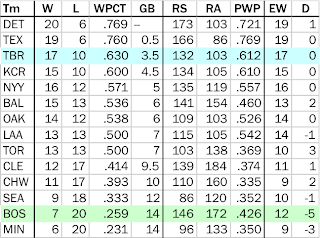 That's right. The Red Sox were five games unlucky in the final month. All they needed was one of those five games to go in their favor and they would have bounced back up to the river's surface instead of sinking to the stream bed like a baseball version of Shelley Winters in The Night of the Hunter.

They were 2-7 in one-run games during September.

But let's also note something else. Tampa Bay was not the best team in baseball in September. They had only the third best record in the AL during that month.

They played very well, to be sure. But both the Tigers and Rangers were better. The Rangers, known for their sluggers, had an astonishing performance from their pitchers in September, a month when AL scoring actually went up. Nobody seems to have noticed this.

Let's finish with the September records of the NL teams: 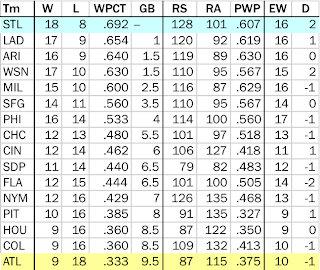 Here we see that the Cardinals were the best team in September (though not in expected wins--they appear to have gotten some good breaks), and the Braves were in fact the worst (managing to get under the Astros, no mean feat when you are talking about a team with less than 60 wins over the whole season). But the Braves weren't as unlucky as the Red Sox: they simply stopped hitting.

They scored seven runs in their final five games, and lost them all.

I have no recollection of any other such amazing parallelism in "final month fortune reversal" as we've just seen over the past twenty-eight days. It's happened in one league or the other, every so often.

But when has it ever happened in both leagues, in parallel, both coming down to one-run losses on the final day of the regular season?
Posted by Near-Genius Nephew at 9:31 AM