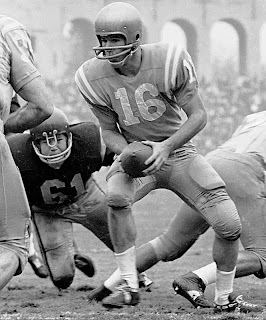 Today, September 1st, is the day that my parents were joined together in matrimony and the day that they were re-joined together in death sixty years later. My mother's interest in baseball (indeed, in all sports) was on the minimal side of miniscule, though there were glimmerings of passion whenever UCLA played USC (she loved the former, loathed the latter). A notoriously self-composed person, she came closest to swooning on a mid-December day in 1980, when she was introduced to Bruins' quarterback Gary Beban.

My father, however, was right "in the pocket" when it came to sports fandom, though his work schedule forced him to shoehorn his attention into the weekends. (Work always came first.) There were plenty of weekend trips to Dodger Stadium once the park opened in 1962, however, with a disproportionate number of those games managing to feature Sandy Koufax. One of the few exceptions to the weekend rule of attendance at Dodger Stadium happened on a Thursday evening in September 1965. 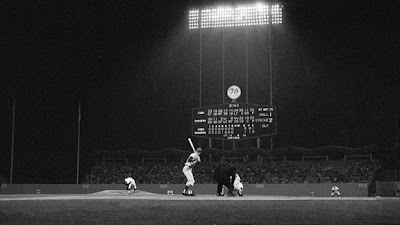 I can remember him fidgeting violently in his seat during the ninth inning, while Koufax closed out the bottom of the Cubs' batting order. And I can remember him getting very, very silent and still when Sandy struck out Harvey Kuenn: it was if he was trying to capture the magnitude of the moment in a way that would never be lost.

I can also remember his plan to save the ticket stubs from the game, and how, two years later, when we moved across country, the desk in which they were stored (along with countless pictures chronicling our family's years in Los Angeles) was made off with by burglars who robbed our moving van as it traveled east. (Occasionally I have dreams in which I am poring over those pictures, including the suite of shots my dad took of me with the cast on my leg after I was hit by a car while riding my bike when I was six years old. Those ticket stubs, alas, have never "rematerialized" in this way.)

My dad especially enjoyed baseball in the mid-sixties through the mid-seventies, and again in the mid-eighties through the mid-nineties (though by that later time phase he was following it literally from afar, as he had moved to Maui, dragging my not-nearly-so-smitten-with-it mother along for the ride). The reason for his contentment with the game during these times is not hard to discern: they are the times during which the New York Yankees were but a shadow of their former self. 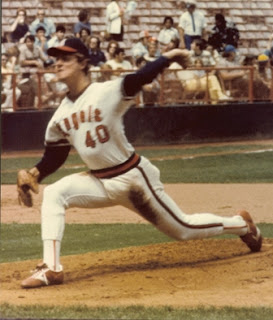 My most vivid encounter with the depth and force of my dad's anti-Yankee passion didn't occur, however, until August 22, 1976, a few days before I was to make yet another star-crossed return to St. Louis in the simultaneous grip of a feverish love affair and a fractured work of fiction.

A Sunday game between the California Angels and the Yankees was being televised; as I moved around the house, gathering up the things I would need for my impending journey, I noticed my dad growing increasingly agitated in front of the TV set.

And, in this case, he had good reason to be turning apoplectic. The Angels had slowly, inexorably built up an 8-0 lead behind Frank Tanana. But the ninth inning was proving to be a little less tranquil.

My dad was by now squirming noticeably, creating seismic motions on the couch.

Fran Healy singled, making it 8-2. Someone in the Angel dugout nudged manager Norm Sherry--or possibly he heard my dad starting to exercise the blue notes in his vocabulary.

Willie Randolph turned blue into purple by smacking a double down the right field line, scoring two more to make it 8-4. My dad began to bounce on the couch as if it were a trampoline.

Sherry was pushed out on the field, and he staggered to the mound, eventually signaling for rookie right-hander John Verhoeven. Yankee manager Billy Martin immediately pulled #9 batter Fred (Chicken) Stanley and put up an actual hitter, Carlos May--who promptly singled to right, scoring two more runs and making it 8-6.

My dad was now chewing a couch cushion, veins bulging, swearing like the sailor he once was.

White hit a fly ball to right, near the line. It wasn't the cheapest home run hit in Yankee Stadium, but it was pretty close. The Yanks had gotten all the way off the floor to tie the game, and my dad fell off the couch onto the floor, awash with mouth foam.

My mother poked her head in, took one look at him, another at me--and disappeared like a shadow.

Incredibly, Sherry stayed with Verhoeven--who actually managed to retire Munson on a fly ball to left. It was deep enough off the bat to get the Yankees fans cheering for the walk-off, and their lusty cheering just added red rims of rage to my dad's already-dilated eyes.

Piniella--batter number eleven in the inning--hit a ground ball toward Angels' second baseman Jerry Remy, who stumbled as he moved for the ball, lunged awkwardly at it, with the ball kicking off his arm and hitting him in the nose for good measure. He went down in a heap, and shortstop Dave Chalk had to retrieve the ball quickly to keep Piniella from trying for second. 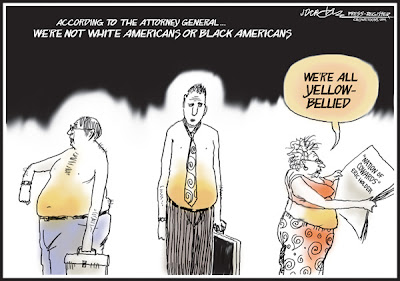 That was enough for my dad. Convinced that the next batter (Chambliss) was going to end the game, creating one of the greatest debacles ever witnessed, he stood bolt upright, hurled a few stray swear words at the screen (I think "yellow-bellied" was a recurring adjective...), and stormed from the room.

He didn't find out until the next day what actually happened. (But you can do so by going here.) He was much calmer by then, anyway--but 1976 was the year he considered the watershed in his own attitude toward the game as defined by Yankee dominance. Thirty-one years later, just a bit more than a week before he passed away, he asked me to tell him what was going on in baseball. He was immensely relieved to know that the Yankees were seven games under .500 and twelve and a half games behind the Red Sox.

It didn't stay that way, of course--the Yanks made the playoffs that year anyway--but sometimes the timing of one's exit is everything. (Love you, Dad. But wherever you are, don't look at the standings!)
Posted by Near-Genius Nephew at 9:22 AM