Whilst the fur flies over Moneyball (fear not, we will weigh in soon...) and the parallel collapse of the two franchises originally based in Boston, there are really important matters that are being relegated to the slag heap because they just aren't as outrageous as, say, the ongoing trial of Amanda "Foxy" Knox (a debacle as protracted as the month of September for the Red Sox and Braves, who are 16-36 since August 31st).

No, what's languishing in the bulrushes is the rise of two hitters with hitting talents that remain opposite to what is favored in the version of the game that took hold in the 1990s and retains its allure despite its imminent decline. 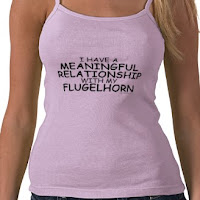 These two hitters are far from the best in the game, but the shape of their statistics (low homer and walk totals, only middling on-base percentage despite a .300+ batting average) tends to keep the recognition of their overall usefulness--well, it keeps it pretty well locked up, that's what it does.

Who are these guys? And what millstone--I mean, milestone--have they both achieved that has us fan-dancing with our flugelhorn (an image that, try as I might, can't quite be captured even with the advent of Internet image innumerability--so you'll just have to settle for the cheap shot of a shapely sight gag)?

They are Melky Cabrera and Starlin Castro, and they are the latest members of the 200-hit club. 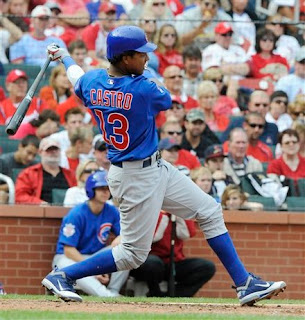 Starlin is only 21, so the judgmental jury (taking after the Italian "school of justice," apparently...) is still out. There is some chance that he'll develop some additional offensive skills beyond a .300 BA, middling power, and a low walk percentage (6%). His 200+ hit debut in '11 makes him only the eleventh player to crack the 200-hit milestone at age 21 or younger, which bodes well for his chances of having another 200-hit season during his career, but leaves the jury sequestered with respect to his ultimate career path (five of these eleven players on the list have been elected to the Hall of Fame or are a mortal lock for it: Ty Cobb, Al Kaline, Alex Rodriguez, Joe DiMaggio, Lloyd Waner).

Melky, however, is a player who has been suspect ever since he first came up to the majors. It probably didn't help that the team was the Yankees, who despite their success with a series of preternaturally long-lived homegrown players who've helped fuel their protracted dominance (Derek Jeter, Andy Pettitte, Jorge Posada, Mariano Rivera, Bernie Williams) are a team that likes to spread the large-size bills around--if only to remind you that there's more than one way to influence a jury. Melky clearly didn't have the physical appearance of a pinstriped pasha...frankly, he looked more like any one of those guys you could see driving dump trucks on the Cross-Bronx Expressway.

As was inevitable, Melky got peddled in what was supposed to be another instance of highway robbery (sent to the Braves for Javier Vazquez), had a bad year, and suddenly found himself playing in Kansas City. Melky was turning 26, and "the whole truth and nothing but" was that he was a piece of meat that had laid out in the sun too long. Spilt, spent, spoiled, and no longer even good enough to be a suspect, Melky's presence on the Royals was seen as the work of a cruel and unusually sadistic god (Old Testament division).

So, naturally enough, we are just about to drop the lethal gas on the 2011 regular season and here's Melky with 201 hits, 67 of them for extra-bases. As with Starlin, he can't walk his way out of a paper bag (as of this writing, they both have 35 bases on balls for the season), but he's sporting a 122 OPS+ and even a basic evidentiary hearing will confirm that he's had a helluva better season than Carl Crawford (who, BTW, has never had 200 hits in a season).

Nobody really expects Melky to do it again, but stranger things have happened. Sam Rice started late, flitted around, had his first 200-hit season at age 30, waited four years, did it again, then did it four more times, the last time at the age of 40. Sam's the oldest player to have 200+ hits in a season. It's probably  the main reason he's in the Hall of Fame. (And players who have 200+ hits at an advanced age, in this case 35 years old and up, do show a marked propensity for a plaque in Cooperstown. The second oldest guy to have 200+ hits in a season is Hall of Famer Paul Molitor. All in all, the percentage of old 200-hit guys (age 35 and up) in the Hall is 55%. 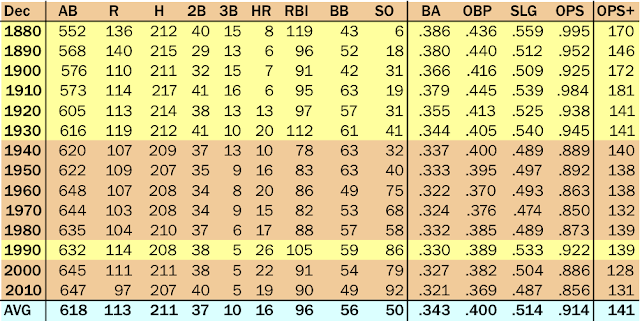 The big problem for 200-hit guys is that they don't walk enough to make happy those of you who wear "the sabermetric 0-for-4" (sorry, no longer available at Cafe Press, and too obscure a reference to pass the puerility test at Snorg Tees). The same dynamic that applied to high-hit players in the past is still prevalent today--they tend to swing for contact more and walk less frequently than league average. A decade-by-decade breakout of the hitting patterns (shown above) of 200-hit players reveals the slow-but-consistent decay of these hitters over time: relative to the league, which continues to feature isolated power, these guys are giving ground. The quality decline was sharp in the 1920s, but the aggregate OPS+ stayed consistent for the better part of eight decades until it took a nosedive in 2000-09.

The history of 200-hit seasons has a lot of interesting detail in it, but it seems useful to at least measure the quality extremes that exist within such seasons. These are probably best manifested by the extremes in walks drawn. Every other combination, including aging, doesn't result in significant differences in overall quality. 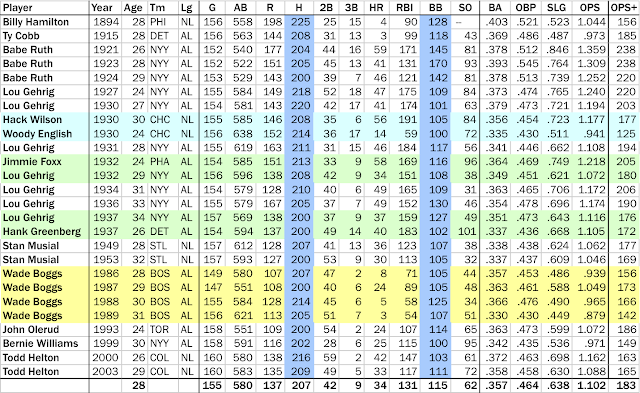 The 200-100 players have, simply put, some of the greatest seasons ever turned in over the course of baseball history. Lou Gehrig is on this list seven times. Wade Boggs pulled off this feat in four consecutive years. It's a list dominated by left-handed hitters (eight of the players here, who total 26 such seasons, are southpaws, and a ninth--Bernie Williams--is a switch-hitter, as opposed only four righties.) 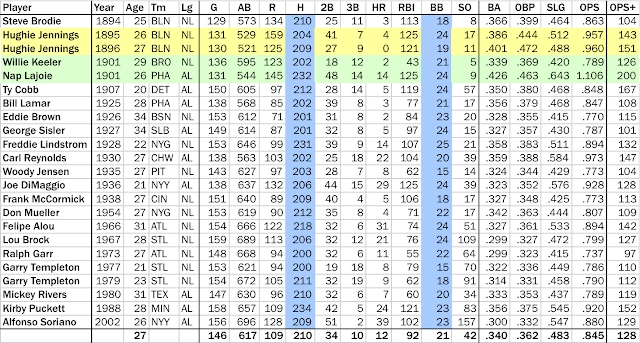 One final chart, and it's a doozy. This one provides you with the complete anatomization of 200-hit seasons from 1887 until the present day, and it's sorted/clustered by age. (We are using our favored definition of age ranges from the old BBBA days, slightly different than that used at Forman et fils. Age Range 1 (orange) is age 25 and younger; Age Range 2 (sky blue) is 26-29; Age Range 3 (light green)is 30-34, Age Range 4 (yellow) is 35 and older.) The Age data shows that 26-year-olds are likeliest to join the 200-hit club. As noted earlier, Melky was 26 in 2011.

The most number of 200-hit seasons in any given year can be found in the right-most column--take a guess? Yes, if you took a flyer on 1930, you'd be right: 20 hitters had 200+ hits that year. But they had 19 the year before. What leaps out from this chart is how the lively ball just made this total jump through the roof--it's a startling contrast from the deadball era. The 1910s (16 total 200-hit seasons) and the 1920s (102 200-hit seasons) are plainly and simply alternate universes.

The slackoff began in the late 30s and it really wasn't until expansion, with its eight extra games, when baseball got back into 200+ hit seasons.

Before you get to the bottom, make a guess as to how many times someone has amassed 200 hits in a season. (No peeking!)

And notice that the vast majority of all elderly players (Age Range 4, 35 and up) with 200+ hits occur in the 1920s. The sharp rise in offense allowed some veterans to ride the wave of the new offensive environment. That seems to have been an unrepeatable event.)

But also notice the odd stepwise progression beginning in 2000 and continuing virtually uninterrupted until today of multiple 200-hit seasons moving in tandem over the age ranges. They moved over into Age Range 4 in 2009, but it's looking like this odd little phenomenon has finally come to close.

Who are the big guys right now in this area? Well, Juan Pierre, of course--the man who had only a 82 OPS+ back in 2006 when he collected 200 hits (one of four times that he's done it). The two leaders in this category, however, are Ichiro! (10 straight times, though not this year...) and Michael Young, who's done it six times, including 2011.

You can't tell from this chart, but the team with the most number of player-seasons with 200+ hits over the course of baseball history? It's a tie: 41 such seasons, held by the Tigers and the Cardinals. The Yankees are third with 36, with the Phillies and Pirates tying for fourth place with 31.
Posted by Near-Genius Nephew at 11:50 PM