A lot--a whole lot--of talk about how 2011 is an incredibly boring year for pennant races...even in the diminished context of that concept as ushered in by the often-maligned Wild Card Era.

But just how boring is it? Is there actually a way to objectively measure boredom? (Of course, there must be--after all, if your master of diatribe can quantify alienation and other such elements in film noir...and I have, in my best neo-post-neo-sabermetric topological sleight-of-hand...then it must be possible, especially when we actually have numbers to use.)

In fact, it's pretty simple (or simplistic, for you professional nitzters out there). You simply grab up all of the standings data from the Wild Card Era (for purposes of this exercise, defined as extending from 1996 to the present), put it into a spreadsheet, and perform some nefariously rudimentary arithmetic operations upon them, and voila!

To be just a little more specific: we take the final standings from each league division (number of games behind for the nearest trailing team), along with the distance of the team closest to the wild card, shake, stir, fold, spindle, massage as necessary (*) and divide by four.

(* By "massage" we refer to the instances in the past sixteen years where teams have wound up with identical records but have not needed playoff games due to the infusion/intrusion of the wild card. These zeroes are more accurately represented by the shape of the tyke's tiny, distended mouth than by the value of "zero," because there's no excitement, no action, no nothing. When this occurs we penalize by adding ten games...and the three times this has happened are shown on the chart in red.) 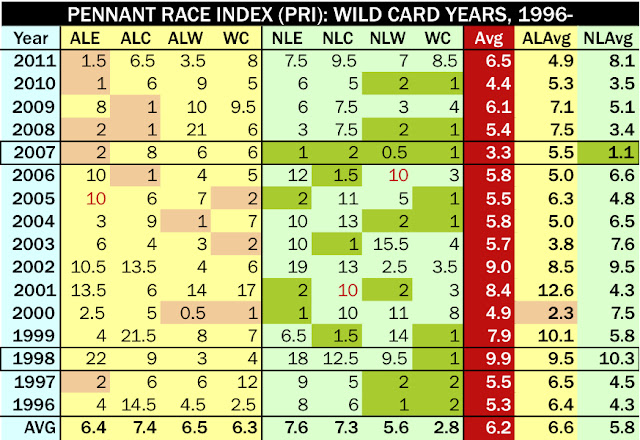 When we do that, we get a chart that looks like this (but only if you happen to be a card-carrying color-coded godless communista...). 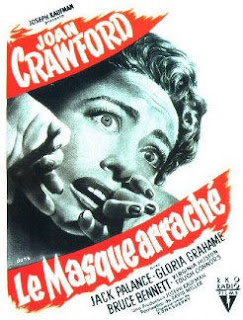 And we find out that the NL has had a helluva lot more close divisional and wild card races than the AL in the past sixteen years. If you count up the off-shaded squares in each league list (and why bother, when you know I'm going to do it for you?), you'll see that the NL has had 24 "pennant race components" that have come down to two games or less in the standings, while the AL has had just...13.

Somethin' about a weaker league, no doubt...but as noiristas inherently know (and don't ask us how...), weakness is strangely exciting.

Now, these overall averages are not without their problems (more on this below), but in this first cut, we can see that 2011 is right about in the middle of the pack, and close to the sixteen-year average. According to this version of the "Pennant Race Index," the most exciting year for the Fall Chase that we've had in this time frame occurred in 2007, while the year with the greatest "Z quotient" was 1998.

The other big piece of data from this chart is the fact that the NL wild card race has really tended to be a dogfight (nine of sixteen wild card races have been decided by two games or less), while they've mostly been a snore-fest in the AL (just three of sixteen).

As stated, there are problems and limitations with this approach. Those "close races" in the AL East are suspect, tainted by the ongoing underarm strength of the Yanks and Bosox (and even the Rays)...probably these type of races, where the wild card is really what's being decided, need some penalty to create an appropriate quantification for the actual yawn inducement involved.

Also, we probably need some kind of standard deviation thingee for this, but we'll leave that to someone who can withstand the odiferous snark that continues to plague these pages and crash through to a kinder, gentler insight. Have at it, folks!!
Posted by Near-Genius Nephew at 12:21 PM