THE LAST ICHIRO WATCH plus: PITY PARTY IN BEANTOWN

Ichiro! had two hits tonight, bringing his total to 175 for the year with only nine games left. It will be one of the great surprises in baseball history if he can get to 200 from such a vantage point.

We calculated the odds prior to tonight's game, when Suzuki needed 27 hits in 10 games. It turns out that Ichiro! has actually had 27 hits over 10 games on four separate occasions in his career--four out of 1731 such ten-game clusters.

Of course, that's about the probability that the Tampa Bay Rays had just a few days ago with respect to overtaking the Boston Red Sox. We will cop to trying to put the ol' BBBA whammy on the Sox when we extolled how well they were playing last month, but even we didn't anticipate something like this. The question that comes to mind (which we asked over at BTF a bit earlier this evening) is: what's the highest September ERA for a team that made it into the post-season? 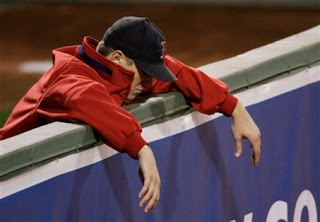 Right now the Sox are right around an ERA of six. They are clearly getting the raw end of the deal this month--all of the pitchers with ERAs between 5.5 and 6.5 over the past two years, when added up, have a 5.91 ERA and an aggregate winning percentage of .369. The Sox are currently 5-14 for the month, which means that they've lost two more games than they should have thus far. The combined OPS+ allowed by the dregs of the baseball in 2010-11 is .855; the Sox hurlers in September 2011 have only been clipped at a rate of .808.

Finally the season is getting interesting!
Posted by Near-Genius Nephew at 11:35 PM