STRETCHING PAST THE SEVENTH: IS A SHIFT IN THE WIND? 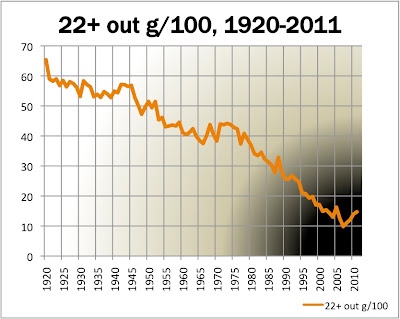 Forget about complete games--they have been circling the bowl of extinction since the mid-90s. What's much less well known is that starting pitchers actually sunk into single figures for getting into the eighth inning in 2007, with only 9.9% of all games started featuring a pitcher recording 22 or more outs.

The shaded area on the chart at right shows how starters suddenly found themselves on the outside looking in once they'd finished the seventh. It was only thirty-two years ago (that's 1979) when starters got into the eighth 40% of the time. Those figures went into free fall in the eighties, briefly reversed course when the strike zone was adjusted in 1988, and then faced the relentless onslaught of pitch count hysteria in the late 90s. 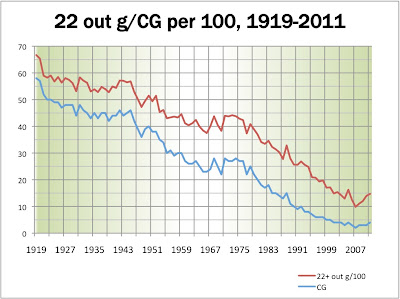 The news to be found here, as the chart shows, is that it looks like 2007 was the bottoming-out of this phenomenon. 2011 shapes up to be the fourth consecutive year in which eighth-inning appearances by the pitcher who started the game have increased. We are edging back toward 15% as an ancillary result of the pendulum shift toward pitchers that's manifested itself over the past two years.

As our second chart (at left) shows, CG are not keeping pace with the uptick in 22+ out games. As you'd expect, there's a great deal of similarity in the "line shape" here--given the similarity in the number of outs involved, they track closely across the years. But the chart makes it clear that there was a significantly greater rate of decline in 22+ out games from starters during the years when Rob Neyer would presumptively claim (for example) that Wade Miller had his career ruined by two consecutive 125+ pitch outings.

This was one of the key salvos in the neo-sabermetric charge--the appeal to a particular type of prescriptive "groupthink" behavior whose primary benefit resulted in a kind of bureaucratic insurance policy for those who slavishly applied this knee-jerk precept. Corn-fed the notion that it was causal in nature by a series of dubious enabling essays, teams began acquiring analytical talent on a shaky set of face-value evidence that contained one grain of truth and nine of hysterical overreaction. 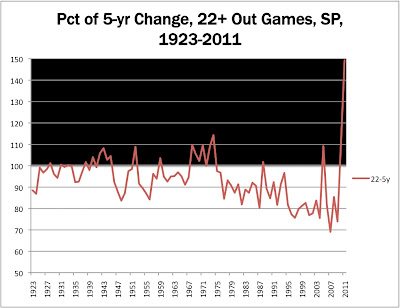 Our last chart (at right) demonstrates that the starters' ability to get 22+ outs in a game has been decaying almost from the start. (Above 100, in black, you'll find the years where the percent of 22+-out games increased; below, in white, are the years where they declined.) Three-quarters of the comparison measures of this stat with its value five years earlier result in decline: only in the years during World War II and the brief period of true starting pitcher abuse (1967-1977, when complete games actually gained ground as well, did these measures show an uptick.

That decline accelerated in the years following 1999, not so coincidentally with the rise of Pitcher Abuse Points.

2011, however, shows the greatest increase in such games as compared with the total from the previous five years in baseball history. Indeed, the increase is almost off the chart. This is a bit of a fluke, as 2007 was the worst such year for these type of starter outings ever, but we've clearly reversed course from the 20%+ downturns that dominated the landscape once the pitch count patrol prevailed. It looks as though it takes about 12-15 years for baseball to overcome a bad idea.

Is the ground shifting? It looks that way...but (as we always say here) stay tuned.
Posted by Near-Genius Nephew at 11:45 PM