On August 2, 1962, the NewYork Yankees had opened up a six-game lead on the second-year Los Angeles Angels. As our batting leader chart for the 1962 AL indicates, they weren't doing it with a series of league-leading hitters. (Mickey Mantle, struggling with injuries earlier in the year, was having a great season, but he wasn't quite eligible for the batting crown.) Only Roger Maris shows up on the chart with a .800+ OPS--but the Yankees would have all eight starters over .700 (the only AL team to achieve this in 1962). That's right, even Bobby Richardson had an OPS over .700! 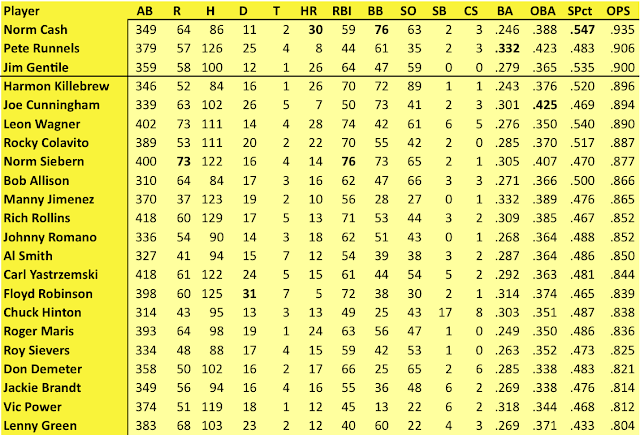 Hitting had taken a nose dive in the AL from the record-breaking numbers posted in '61. It's odd to see Norm Cash with a BA more than 100 points lower and still leading the league in OPS.

Over in the NL, the Dodgers were without Sandy Koufax (felled by a finger) but still clung to a four-game lead on the San Francisco Giants. With expansion in full swing in the Senior Circuit that year, the first-year Mets were already 50 games below .500 (26-77). As a result, it was a hittin' league. 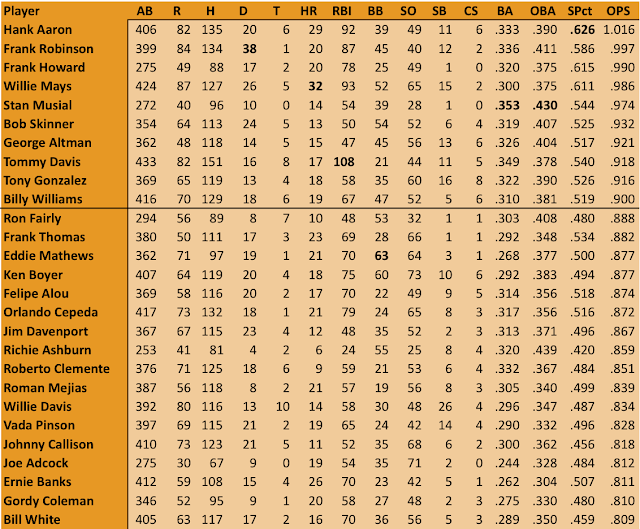 Ten hitters with a .900+ OPS, as opposed to just three over in the AL. Tommy Davis with 100 RBI already! Stan Musial's last hurrah. Tony Gonzalez, of all people, making like a superstar. (Tony was actually quite a good player, but this was way above his usual level.)

And George Freakin' Altman. This was the second of two .900+ OPS seasons for George. The Cardinals thought they were setting up a pennant when they acquired George from the Cubs after the 1962 season in a blockbuster trade that sent Larry Jackson to Chicago.

It didn't quite work out that way. Altman, the Ryan Ludwick of his day, petered out and went from AAAA "skimmed cream" (Brock Hanke's term) back to a guy one step away from the glue factory. The Cards would have to get another outfielder from the Cubs in 1964 in order to nail down a pennant.

What was his name, you ask? Lou Brock.
Posted by Near-Genius Nephew at 11:59 PM