WHAT FLAVOR OF O's ARE THESE, ANYWAY?? 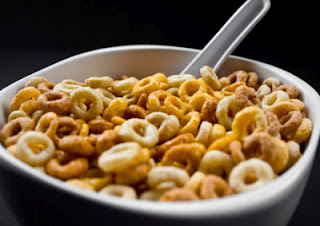 Let's see...we have the usual suspects pushing watered-down versions of soothsaying tools in an attempt to make you believe that they know something about the future.

Yes, Dave S. and Joe P. have wandered into the Cheerios plant right at the moment of a massive quality control snafu, where all the various niche brands of O's have been inadvertently mixed together into an imponderable mess.

Yes, you could call it a granular apocalypse... Honey Nut tossing in with Banana; Frosted sendin' mash notes to Yogurt Burst; Cinnamon making bedroom eyes with Chocolate (...and can we avoid--especially in an election year, for Crissakes--making an incendiary comment about the glories of black nookie? Of course not!!--especially when the scarifyingly sexy Patricia McKenzie is steaming things up with Robert Pattinson in David Cronenberg's latest, the existenzial crash-and-burn called Cosmpolis).

And all because those O's from Baltimore--the ones that Dave and Joe and a whole bunch of other folks (whose heads seem to have that same empty space in the middle that Cheerios and every doughnut in the hand of every cop getting caffeinated for a little late night dance of deadly force has been occupying since before the 1% had mastered the soap-bubble principles of self-containment) have been dissing because they are playing over the heads...those O's are still in the race.

To be fair to Dave, he's trying to find a way to get on the Baltimore bandwagon. But his body language is a lot like a hitter who's just been knocked down--that front leg has a lot of jelly in it (and we didn't really mean to conjure up more doughnut imagery: as Frank Zappa said, it just crawled into my hand). He's left himself a quick path to the exit in case the O's take a powder.

Joe P., in a new phase of his shill pages, uses WAR when PWP would be the better binding agent for the Tango Love Pie™ he be bakin' of late, reminds us that, by gum, the O's are playin' over their head. And that should do it for us--let's face it, if WAR (whichever mixed-up version of it is being used, since that Cheerios factory malfunction is applicable to the state of that oversold, overexposed and overrated tool) and PWP agree, then why should we even try to do anything else?

Why? Because... --despite what many are committed to believing about a big bad blog that prominently features the phrase "The lost art of the diatribe"--because...we like you! And we want you to have some alternatives to the mixed-up confusion of the groupthink that seems to be increasing its grip on those who've seen so many reversals and mixed signals in the past twelve months.

We want you to have some historical context, instead of one monolithic math orgasm (surely an oxymoron if there ever was one)

Some of you will remember earlier in the year when we told you that the Orioles, who'd gone 29-17 to start the year, had a 93% likelihood of finishing the season at .500 or over. Such a notion was culled from the data available at Forman et fil, which allows us to examine more than two thousand team-seasons in order to create a projection with historical credibility. 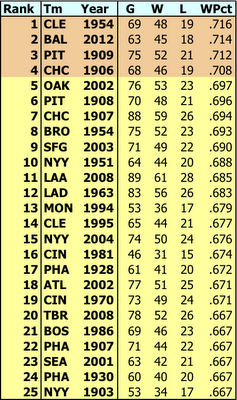 Few (probably fewer than the 7% of teams who started 29-17 and finished under .500) put much stock in that figure...yet here we are, going into September, and the O's are hanging in there.

But, the groupthink groans, they're clearly playing over their heads, and, and--WAR and PWP agree, already!

Which is why we should look a little deeper at the data.

Dave S. points out that the O's are 24-6 in one run games. Well, astonishing that certainly is... but it's only about a fourth of their games in '12. Turns out that when you expand that to include two-run games, the O's are currently 45-18. As the chart indicates, that's not merely astonishing...it's historic.

That's right. Right now, the O's have the second best won-loss record in games decided by two runs or less in baseball history.

Now lest this send some of you off in the direction of the WAR/PWP predictive hegemony, let's stick around a bit longer and look for any recent historical parallels.

Going down that Top 25 list a bit gets us to the 2008 Angels (11th best) and the 2008 Rays (20th; really should be 19th, as the '81 Reds played in a strike season and should be pulled from the list). Both these teams parlayed extreme success in close games into post-season appearances; both teams played better than their PWP would have indicated. In the Angels' case, they won 12 more games than their PWP.

We've not got the time to check all of these teams, but we're betting that the vast majority of 'em had WPCT in excess of what PWP prescribed. [EDIT: We should note, of course, that the other three teams with > .700 WPCT in close games are all high-win teams, much higher than will be the case for the '12 O's.]

But wait...we have a few more Cheerios to toss around. Keep in mind that the following data include some small sample sizes, but note also that a seasons' worth of data is itself a small sample and that the Dave S.'s and Joe P.'s et al are fond of waving around their own privileged small samples when it suits them--apparently mixing the Cheerios is something of an unavoidable occupational hazard. Take the following with a grain of salt, but don't put it in your cereal bowl...

Here are three stages of the O's--their first 72 games, where they treaded some water after their fast start; their next 29 games, their "bad patch" thus far in 2012; followed by their most recent 27 games, in which they've been playing about as well as they did in the opening six weeks of the season.

The chart shows how it's possible to distribute good fortune over several levels of play. The O's have gained on their PWP (the "Dif" column, second from the right) in all such cases this year--when they were playing just OK, when they were playing poorly, and when they were genuinely playing well (from top to bottom in the chart). They had a pitching crisis (as we'd kinda sorta predicted back when we first wrote about them...), but during that bad stretch they managed to go 6-0 in one-run games and beat their PWP by three games.

Similarly, during their current streak, they've hit better, their starters have stabilized, and their bullpen has remained solid--and they are another three games up on their PWP. And perhaps you won't be surprised to discover that the O's bullpen, third in the league in ERA, has the best won-loss record in the AL (22-10, a half-game up on the Oakland A's.)

So what's behind all this? Luck? Good managing--of a type, however, that's not on the approved list of ingredients for the Tango Love Pie™? Or some inchoate, mixed-up cereal bowl of causes and effects? Unlike many who toil in the increasing "serial punditry" of the numbers world, however, we are content to let the O's fall where they may--and let you make up your own minds.
Posted by Near-Genius Nephew at 2:35 PM