A nice new feature at Forman et fil: lists (at times quite long) of trades made between franchises over the course of baseball history. (Actually, it's not clear to us just how "new" this feature actually is, but it's new to us, and we are delighted to discover it.)

If we remembering correctly, this is data originated by the good folks at Retrosheet. One of that organization's stalwarts, Tom Ruane (who contributed to BBBA in 1999-2000 and helped make those volumes a good bit weightier than they had any right to be), has done a great deal of analytical work with trades, some of which is available at the Retrosheet site.

We don't plan to trespass into that exact territory, though there are some patterns to be discerned that may yet to have seen light of day. (We'll get back to that idea a bit later, when time permits.) For now, we simply want to mine the data as presented by Sean in order to examine the trading histories of baseball's greatest long-term arch rivalries.

And yes, those would be the New York Yankees v. Boston Red Sox (neither of whom has sued the other nearly as often as the Beach Boys' Mike Love has filed paperwork against his own cousin...) and the Brooklyn/Los Angeles Dodgers v. New York/San Francisco Giants.

Let's start with the Dodgers and Giants. When you look at the trade page, you'll see that the two teams last made a trade in 2007, which represented the second trade between them over a span of forty years. 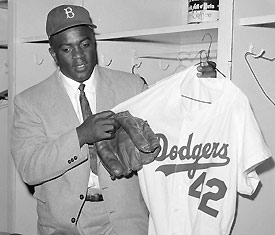 The most famous trade between the two teams, as many of you know already, was the one that didn't stick--the December 13, 1956 trade of Jackie Robinson which was voided once Jackie retired.

Of the 28 trades the two teams have made since 1901, 16 of them were simple purchases. As a look at the page will indicate, they dealt back and forth with reasonable regularity until they both moved west--and it was at that point that the tap was turned off. Over the past 54 years, they've made exactly three deals.

Now let's move on to the Yankees and Red Sox. As the trade page demonstrates, the boys from the Bronx benfitted at a level that must be considered historic as a result of seven trades/purchases with the Red Sox between 1919-1924. As a result, the dynasty that had been thriving in Beantown moved a couple of hundred miles southwest to New York, and has (for the most part) remained there ever since.

Unlike the Dodgers and Giants, however, the Yanks and Red Sox actually managed to make a couple of fairly substantive trades. The biggest of these--and the one that would help the Yankees return to their old dominating ways--came in the spring of 1972, when they acquired Sparky Lyle for Danny Cater and Mario Guerrero (yes, THE Mario Guerrero). That set up the Bronx bullpen for a number of years to come.

The last trade that the Red Sox and Yanks made came in 1997. It involved two well-known and well-traveled players: Tony Armas and Mike Stanley.

All in all, the teams have made 42 transactions since the Yankees have been in New York (18 of which were straight purchases, including the fateful one on January 3, 1920 that--purportedly, at least--initiated a curse that some people believe was broken in 2004).

To which we say: dream on, suckers!

Posted by Near-Genius Nephew at 6:46 PM