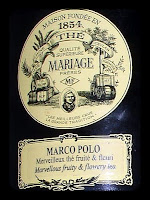 So where do we come up with such a projection? Soothsaying based on our favorite flavor of tea leaves (if it's not Mariage Freres, folks, it's not worth talking about...) or some other, even more arcane artifact of divination? A mantic projection from the team's pattern of home run hitting that took a surreal turn in June and July?? A rekindling of a long suppressed belief that Billy Beane is a genius???

That would be no, no, and--no. Here's the answer in a nutshell far too small for Stomper, the A's omnivorous mascot...

Oakland has just completed a 40-game stretch in which they have gone 29-11. We decided to look at the history of teams who've managed to win at least 29 out of 40 games during the course of a season. We went back to 1969, figuring that divisional play might be the best place to begin. 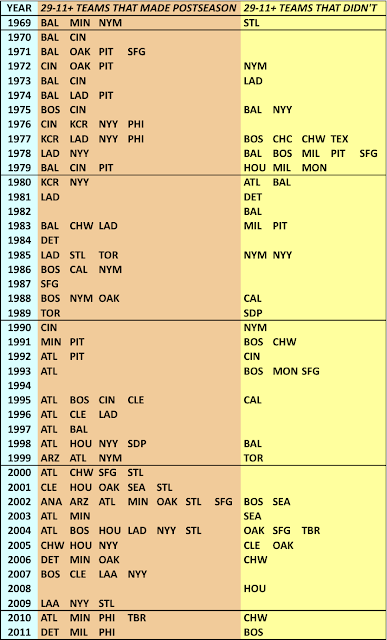 We've generated a chart that shows all the teams who've met that criteria (29-11 or better over a 40-game stretch) in the past 42 seasons. As you can see, most of the teams who've done that have gone on to the post-season. (Of course, you'd have to count the teams in each category since we've seen fit to merely list them all...but fear not, we'll count them up for you, too.)

As the chart shows, however, there have been few "misses" for 29-11+ teams since the institution of the wild card. In the late 70s, a slew of teams had quarter-season hot streaks only to fade into the sunset by season's end. From 1969-1992, the "post-season percentage" for such teams was just a bit above 60% (62.2, to be exact).

So we can use the historical record to suggest that the A's have a 70-80% chance of making it to the post-season based on this data point.

While no one could possibly have expected the A's to have done this at the start of the year (and some of you may still be wondering if this is not some kind of mass hallucination), the fact is that they've reached a level of play that happens for four teams a season (on average), and three of every four teams that manage the feat have played in the post-season.

[UPDATE: This just in...the A's have just pulled off their 13th walkoff win with a 5-4, 15-inning victory against the Toronto Blue Jays. Their latest kid pitcher, Dan Straily, who made his major league debut this evening, threw six innings of one-run ball. One of their out-of-nowhere mashers, Chris Carter, hit his ninth homer.]
Posted by Near-Genius Nephew at 11:59 PM