WHAT DOES IT TAKE TO FALL APART?

The new year, arriving on the heels of the Oakland A's tradeoff of three frontline pitchers and the Chicago Cubs (aka Theo'n'Jed's Sausage Shed) deep-throating of Carlos Zambrano's contract, is virtually guaranteed to send the post-neo saber-fatalists into paroxysms of punditry capable of outstripping the mainstreamers they love to excoriate. (Since news often travels in threes, we can only hope that the Houston Astros will bite the bullet and hire Keith Law in a dual role--deputy scouting director and team mascot.)

The consensus in the ever-Iagoseque world of numbers is that Billy Beane has at last been exposed as a corporate shill, in direct opposition to his portrayal in Moneyball (and, yes, we still owe you our rev-up on the film, the flim-flam, and the many talking dead bodies that are still molesting the many myths that were serially propagated over the past decade). 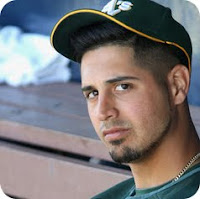 The universal contempt for his recent deals, which sent starters Trevor Cahill and Gio Gonzalez (snif!), plus reliever Andrew Bailey, off to far-flung destinations for a minivan full of farm-fresh produce, is an amusing reversal of the 1998 idolatry accorded then-Marlins' GM Dave Dombrowski for his acquisition of a rhythm section's worth of first-round draft picks.

The fine feathered folk who touted the "Swing Kids" strategy in 1998 lived through a number of years where the Marlins fell far short of the scenario predicted for them, were buoyed by the parallel success of the A's, whose longer-term run of fortuitous draft selections coalesced into a set of mythic performances in 2000-02 that ushered in a wonk-infused feeding frenzy.

But the A's stalled (purportedly because their "brand" of exploiting "market inefficiency" went by the wayside). As with the five-year plateau that faced them in 2002 when the Marlins remained on the wrong side of .500, the A's old constituency has finally gotten off the bus. Jonah Keri, the krown prince of profit-pundit shape-shifters, actually tossed an incendiary device into his most recent screedy-poo at (g)Rantland, dousing Beane with gasoline as the hired hand of an owner with an agenda as dire as Wayne Huizenga or Jeffrey Loria. (That A's owner is now nicknamed Lew "the Leper" Wolff.)

The massive irony, of course, is that as Wolff and Beane tear down their team, their actions are no longer brilliant. And yet as Theo'n'Jed (Epstein and Hoyer, the two goombas from Boston who've begun to share a reinforced houseboat on the shores of Lake Michigan) make a series of similar steps (while not actually resulting in any dramatic payroll reduction, mind you...), they are the beneficiaries of what is mostly a "hands-off" policy.

We might humorously ascribe this to an inverted variant of Keri's discarded (shape-shifter, remember?) "theories," which we could rechristen as the "failure cycle," but we really ought to get down to something actually worth reading about. Let's just finish this long opening aside by noting that five years is clearly the operating limit for the cultural heroes of the numbers set. Epstein, a clever shape-shifter himself, bought himself time by taking a powder: by leaving Boston (four years after his last big success, and with two years out of the post-season), he was able to re-set the clock.

Beane and the A's, however, are now worse off than a discredited mid-fifties Politburo member. While it's gratifying that the crossed-sword set is actually willing to acknowledge how many games the long-ago vaunted (and summarily eviscerated) Fish Fillets (aka the Marlins) lost in 1998--that's 108 big ones, for those of you who were riding the space shuttle at the time--it is by no means a done deal that the A's will suffer the same fate.

It's not a done deal, in fact, that they will actually be all that much worse than they were in 2011.

There, we've said it. And, of course, we have some of our always handy, usually idiosyncratic data with which to wrangle. 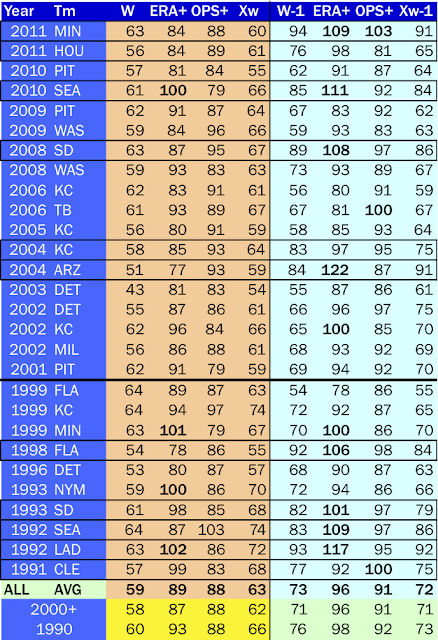 What does it take to fall apart? Nobody is really sure, of course, until after it's happened. But that won't stop many from predicting it, particularly if they've been unlucky in love. The A's are odds-on "favorites" to lose 100 games (for the sake of our data, we'll interpret this as playing less than .400 ball).

Teams in the .399- WPCT bracket, as the data from the past twenty years demonstrates, do not tend to be exemplars of the "fall apart" syndrome. They tend to be a good way toward the lower depths already, and merely slide further into a region below mediocrity. The overall average drop for these teams is 14 games, but this figure has tightened a bit in the most recent decade.

Using a formula that uses team ERA+ and OPS+ to solidly mimic Pythagorean Win Percentage, we see that in the last decade teams who've declined into sub-mediocrity have lost the most ground in their pitching staff.

But the eighteen teams in the most recent decade have clearly bifuracted into two distinct classes (as the more detailed breeakout will demonstrate). They've splintered into teams that genuinely, catastrophically collapse (we can put the 2011 Twins and Astros, the 2010 Mariners, 2008 Padres, and 2004 Royals and D-Backs into this category), as opposed to mediocre teams that were already skating closing to the thin ice separating them from pond scum status.

Only five out of these eighteen teams had better-than-league-average pitching in the year prior to their sub-.400 season. Four of them are teams that really collapsed. And these are the only four (out of nearly two hundred league seasons where teams scored a 100 or higher in ERA+) where the teams collapsed.

The A's had an ERA+ of 110 in 2011. While they've lost three front-line pitchers, one of them (Cahill) was slightly under the league average in ERA+ in 2011. The A's have quite a backlog of young starters, including several who were acquired in these most recent trades. There is no fait accompli that the A's pitchers will suffer a catastrophic reversal in 2012. 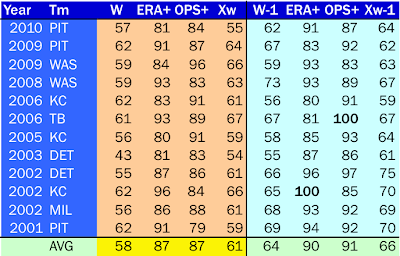 The data strongly indicates that it's the pitching that drives the decline process, however. (The steady-state bad teams show a more balanced decline.) So how far do the A's need to drop from last year's pitching performance in order to sink into the morass that so many are expecting?

Let's answer that with a bit of indirection. What's clear from the data when we separate the two classes of .399- teams (the bad-by-free-fall from the bad-by-steady-state) is that the 2011 A's have a performance profile more like the free-fall teams, but we have to remember than there is a totally unrepresented class of teams that need to be mentioned here; namely, the teams that didn't collapse at all, but remained at least mediocre (winning 75 or more games in the following year). The A's still have a backlog of pitching that  can cushion their fall; if they are able to stay at or near league average, they are going to be able to win enough games at home to escape catastrophe.

The best Beane can do when asked to remove payroll is to reposition the team to have the best possible chance to tailor the talent distribution around the characteristics of his home park. He's done that.

Now back to the question. How far do the A's need to fall in order to fulfill the wish-fulfillment of those who would send Beane off to a sabermetric gulag? The answer: several ways--both of them requiring a drop-off combination of at least twenty percent (as shown in the diagram: projections for 2012 at the left; last year's data on the right). The two likeliest scenarios are: a balanced downturn that's relatively even across offense and pitching performance; or a catastrophic decline in one category (we've chosen to humor the doom-sayers and put it all in the pitching side of the ledger).

Both of these would get the A's down to a projected win total that'd drop below a .400 WPCT; the current likeliest projection, however, looks more like a more modest downturn, one that won't push the A's down into the type of oblivion that teams such as the Royals and Pirates have reached. (We've also included the current projections for the Cubs and those current sabermetric darlings, the Tampa Bay Rays, entering that fateful fifth year of being the daring Davids in the ever shape-shifting maudit Moneyball formulation still swirling in the snark-infested waters of the post-neo zeitgeist.

Consequently we're inclined to think that a mild drop-off in 2012 will be followed by a return of solid pitching in '13. Add in some incremental offensive improvement and the 2014 A's (wherever they might be playing) have a decent shot to be "the new Rays."

Be sure to forget that you read it here first.
Posted by Near-Genius Nephew at 11:07 PM