It's time to mess around with some data in the subcutaneous regions. (We all need to wind down from the agitato of the Hall of Fame's bloody penumbra.)

So we will fly under the Hall of Fame--literally, in this case.

The vagrant thought that motivated this was an old chestnut: the platoon advantage. Or, rather, the disadvantage as it's often manifested in lefty hitters vs. lefty pitchers. We wondered if there might be any rhyme or reason in it--meaning some other kind of correlating pattern which explained its overall behavior.

So we decided to take a subgroup of hitters who would have been good enough to have actually given a prolonged opportunity to hit against lefties.

That group, after a couple of generous swallows of a high-powered Trappist ale, was identified as the left-handed hitting first basemen from 1930 to the present who are just below Hall of Fame level play.

We gathered the 38 hitters and calculated their personal OPS+ against lefties (we call it LOPS+, and it corresponds to the sOPS figure that Forman et fil calculate on their splits pages). That data is presented in the table at the left.

When we average out some of the other salient data about these guys, we discover that, as is the case generally in baseball as it's moved into the present, power is increasing. We took our three historical categories (30s-50s, 60s-80s, 90s-now) and averaged the ISO (isolated power) and the XBA (our stat, called eXtra Base Average, the percentage of total bases that are created from extra-base hits). When you look at that, you'll see that there's a big uptick in the last 20 years.

This is also accompanied by a general improvement in the performance level of the lefty-swinging first sackers who are "bubbling under" the HoF.

The overall LOPS+ value for all 38 lefty-swinging first basemen is 79. That is, they lose about 21% of their overall OPS+ as a result of facing left-handed pitchers.

The historical data shows that there was a slight dip in the platoon performance of the lefty first-sackers who played in the 60s-80s group.

From this, it doesn't look like there's a whole lot to this study...

And, in this case, the slice we want to do looks at a grouping of players by their ISO/XBA.

So what we're seeing here is that the more XBA or ISO these players have, the worse they are at hitting left-handed pitching. 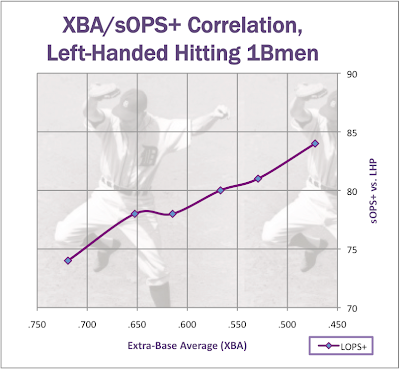 Now possibly this is simply an intuitive thing. It might just be common sense to you all that the more a left-handed hitter successfully swings for the fences (or emphasizes extra-base power), the more trouble he might have with southpaws.

But it's not something that we've ever seen broken out in any way. So, here it is.

We of course realize that this is a highly targeted small sample size. It surely isn't representative of average players--though it could be. One thing to test is the performance of other lefty-hitting players who play different positions, but who hit at an analogous level for their defensive position. (In other words, hitters from other defensive positions who are the "bubbling under the HoF" types.)

We'll probably get to that a bit later on in the remaining off-season.

OK, it's coming back to us. What spurred this little exercise was the ongoing discussion of Norm Cash, the Tigers' long-time slugger. Cash had a fine career, and he gets touted as a "skirting the HoF" type from now and then.

But he had a very pronounced platoon split (just 61 LOPS+, one of the worst such scores among the players we've broken out).

The positive point, however: he owned righties.

That makes him eerily similar to a man who, unlike him, is widely considered to be a vastly overrated player--Ryan Howard.

Cash spent a portion of his later career being sat out against lefties. That was a lot easier to do in those days because the Tigers weren't paying him an absolute king's ransom to play. The Phillies might be well-advised to have Howard sit against lefties, but given what they're paying him, it just isn't feasible.
Posted by Near-Genius Nephew at 11:09 PM