Jorge Posada has announced his retirement...the late-blooming Yankee backstop was a mainstay during a time when the gorillas from the Bronx were exceptionally successful even by their standards. 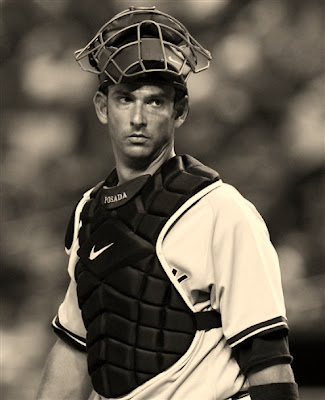 He's not going to be a force in the Hall of Fame voting in 2017, though one expects him to stay on the ballot for a few years. His association with the Yankees during an extremely successful timeframe should boost his vote totals, as opposed to what happened to a switch-hitting catcher with a similar profile (Ted Simmons, who dropped off the ballot with only 4% of the vote in 1994).

Here's a brief sketch of factoids concerning Posada's career that will add a little more perspective.

First, of course, is that late-bloomingness. You can count on the fingers of one hand the number of players who had their career year at age 35.

That age-35 season is the best such season turned in by a catcher that age in baseball history. (WAR-mongers might argue for Elston Howard's 1964 season, but they'd be doing so on the basis of the sketchy defensive values that the system kicks out for catchers. Posada's 153 OPS+ dominates the list of 35-year old backstops.)

The lengthy post-season that was so often part of the Yankee experience during Posada's career seemed to grind him down. Forman et fils' post-season breakouts show a marked decline over the escalating course of the post season: Posada's OPS in division series was .790; in championship series it was .742; and in the World Series it fell to .667. 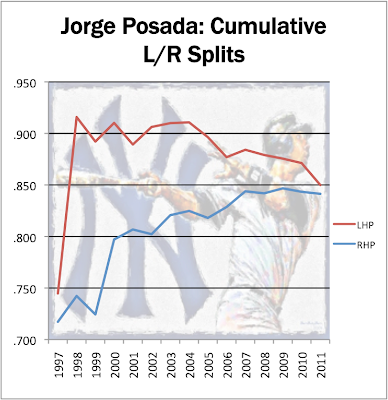 In terms of his career development as a hitter, Posada began as a much better right-handed hitter, as our chart of his cumulative left-right splits demonstrates. He made a rapid improvement from the left side in 2000, and continued to improve as a lefty from then on--one of the contributing factors to his ability to remain an extremely effective hitter into his mid-to-late 30s.

That sharp dip in 2011 that's shown for his right-handed hitting (the one marked "LHP") shows the specific nature of Jorge's decline. He was just 6-for-65 against lefties last year. (That might have been a contributing factor in his decision to hang it up.)

The thought of playing anywhere else probably also influenced Posada. Of all the ballparks in all the major leagues, the one he really didn't want to walk out of (to rework that Casablanca reference just a bit...) was New Yankee Stadium. The revamped "House That Ruth George Built" proved to be exceptionally cozy for Jorge: in the three years he played there (at the advanced age of 37-39), the park literally kept his career going. He hit .302 there, with an OPS of .938. On the road, those number were considerably more wan--as in .209 and a .665 OPS. In 2011, Posada hit .165 away from the Bronx, with a .524 OPS.

Of course, we'd be remiss if we didn't work in a couple of "midwestern angst" digs into this. First, Rob Neyer's knee-jerk notion that Posada was held back from enough career games in 1996-99 to cost him a slot in Cooperstown wasn't really worth the time it took to write the column. (That's the Damoclean sword of the Internet--it just coerces that empty content out of you...) [EDIT: Hi, Rob!! :-)] There's a good chance that Jorge will end up in the Hall--but it will be sometime after 2030 or so, when many more things have shaken out. Second, it turns out that Posada's very favorite place to hit is--you guessed it--Kauffman Stadium in Kansas City (.340 BA, 1.011 OPS).

Thanks for the memories, Jorge.
Posted by Near-Genius Nephew at 3:27 PM