A few surprises in this data set. We are looking for macro-patterns, and today the search is focused on the overall performance data in bullpen stats for the American League over the past twelve seasons (that's 2000 through 2011).

First: things don't even out. 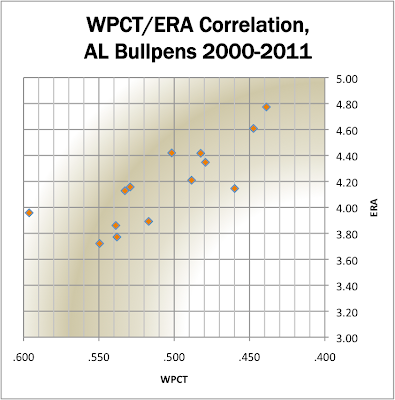 The basic twelve-year data (at left) shows that over twelve years there is an effective range of a full earned run per game between the best performing team (the Angels) and the worst (should we be surprised to discover that it's...the Royals?).

The correlation between the won-loss record by relievers and overall bullpen ERA is a good bit stronger than what one might believe (PEARSON test brings it in at around 80%). The only real outlier in the chart (at right), the team at the far left (we show best to worst from left to right here...) is, of course, the Yankees.

What may surprise is the more conservative "tuck-in" that the overall bullpen data suggests to be the case. The won-loss record for relievers actually stays within the parameters of overall winning percentage: it is a centrifugal rather than a centripetal force.

While there are a number of examples of high-win, high WPCT seasons (three teams--the 2006 Twins, the 2007 Mariners, and the 2009 Yankees--all had bullpen WPCTs over .700), the overall ERA for good teams (92+ wins) in this time frame trails the overall WPCTs posted.

As the data shows, bullpens in general do not lift up good teams' winning percentages, nor do they drag down the won-loss records of bad teams. The effect is, in fact, the opposite.

Finally, let's look at the overall bullpen rankings for the teams over the 2000-2011 time frame (as ranked by bullpen ERA). 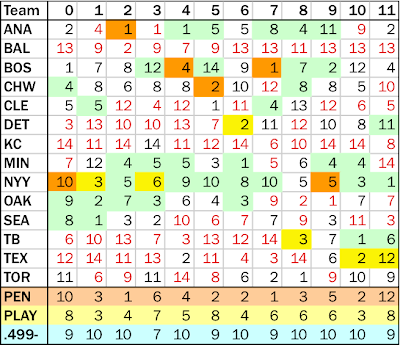 At the bottom of the chart the pennant winner rank is shown in its own line. That average rank is 4.3. The opening (2000) and closing (2011) pennant winners (Yankees, Rangers) are the only teams with seriously sub-par bullpen ERA rankings: everyone else is in the top half, with seven of the twelve pennant winners ranking in the top three.

The average playoff team is shown next as an average. Overall, the average rank is 5.4. Only one playoff team--the 2005 Red Sox--finished dead last in bullpen ERA.

Finally, "bad" teams (those with a WPCT under .500) are represented with their average. As you'd expect, this is relatively high at 9.4. Two of the chief culprits here are (who else?) the Royals, with an average rank over the twelve-year span of 11.8, and the Orioles, who are on their heels at 10.4. (The Royals have finished last in bullpen ERA six times in the past twelve years, though they made a good jump in 2011; however, they did something similar in 2007...only to regress to the bottom again.)

The chart also shows that there has been a good deal of performance volatility, particularly around pennant and playoff teams. The Red Sox showed a lot of this in the 2003-05 period, and they have been the most ping-pongy of all AL teams over the twelve years represented here. The White Sox had a bullpen apotheosis in 2005 and won the World Series; the next year, the bullpen lit itself on fire. The Rays made a huge jump in bullpen performance from 2007 (last) to 2008 (3rd), which is one of the reasons that they exceeded all the improvement projections made for them that year. The Rangers made it to the World Series with two vastly different performance levels from their bullpens in 2010 and 2011.

2010 was the only year in which the top four bullpens (as measured by ERA) all made it to the playoffs at the same time.

Least volatile bullpens over the time frame: Yankees, Orioles (but not in a good way!), Angels, Royals (again, not a positive manifestation...), Twins.
Posted by Near-Genius Nephew at 8:03 AM