ANGELL, CONE AND THE FOUR-FORTY

Long Gone to San Francisco for the tenth annual edition of Noir City, followed by the invasion of the all-too-common cold (a "gift" from the loveliest of colleagues), so we will check the compound sentences at the door and man the Kleenex... 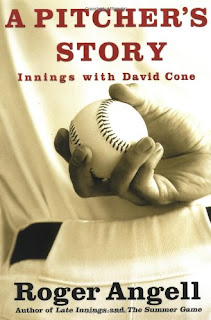 During recuperation, we've finally cracked open A Pitcher's Story, New Yorker legend Roger Angell's volume on the life and times of David Cone. Published in 2001, the book leaves out Cone's final years on the mound and doesn't touch upon any type of career evaluation--as is often the case with Angell, his focus is as much off-field as it is with the action between the white lines.

The book has a circuitous structure, moving back and forth centripetally from Cone's embattled 2000 season (4-14, 6.91 ERA), the year that quite probably chilled his Hall of Fame chances (more on that later).   As is also often the case with Angell, it seems that the narrative progression is built around his innate sense of shifting tonality--though, here, the range seems narrower and more muted than has been the case in his earlier work.

And there's also a sense of deja vu, as if Angell couldn't keep himself from revisiting the theme of career collapse that he'd so compellingly examined in "Gone for Good," his highly acclaimed portrait of Steve Blass.

So while we don't wind up suffocating from a sense of "been there, done that" (the details of Cone's story add flavors that rescue it from being 100% derivative), we can sense when Angell's narrative suffers from what we are dealing with right now--more congestion than is comfortable.

The book was originally going to be more analytical, but Cone's rapid decline--a descent that, ironically, began immediately after pitching a perfect game on July 18, 1999 (against a team that no longer exists)--made such an approach unfeasible.

As always, Angell is good at psychological portraiture, and his talents don't desert him here. One senses that he has more discomfort with his subject, however, due to the greater age difference between himself and Cone--he references this fact on several occasions, as if to indicate that the "post-modern" sexual lifestyle is something completely alien to him. (It's also clear that Cone didn't want to go into these matters in any level of detail, and it falls to Cone's wife Lynn to provide greater perspective on the impact of his sexual peccadilloes.)

Angell shows the influence of the then-current pitch count craze, raging as it was in 2000, by subscribing to what we might call the "single-game catastrophic high pitch count theory." As was always the case with this approach, it focused on only the few cases where such a high pitch count correlated with a soon-manifested injury. Cone's 166-pitch game was clearly excessive, but there's no evidence that it had any effect on the length or quality of his career. Ironically, Cone reported a significant reduction in arm pain in 2000, the year that was by far the worst in his major league career.

Cone comes across as an interesting personality, and it's actually a bit disappointing to see that he's not doing more with his post-baseball career other than work as a sportscaster for the YES network.

As for Cone and the Hall of Fame: his collapse after his 1999 perfect game weakened his candidacy via traditional stats. His won-loss record was 178-97 (.647) on July 19, 1999; from then on, he went 16-29 (.355). Pitchers who win 200+ games and have a lifetime WPCT of .600 or higher have all gone into the Hall of Fame (with the lone exception of Carl Mays, whose fatal beaning of Ray Chapman has left him permanently on the outside looking in).

Cone wound up 194-126. By sabermetric measures (we always endeavor to leave "metrics" out of our "narrative" and vice-versa), Cone scores well, maybe a bit better than what's actually the case; but he would not be a bad Hall of Fame choice and he just might get a nod down the road apiece from the Veterans' Committee.

Angell displays his well-known interest in "baseball trivia" (all the while rightly acknowledging that there is nothing trivial in baseball to those who have been captured by it) in several digressions within the book (in fact, the book's structure might best be characterized as a series of digressions). The question that might resonate best with you, dear reader, is the one he dubs the "Four-Forty," and it goes like this:

What players with four or fewer letters in their surname managed to hit forty or more homers in a season?

At the time the book was written, the answer was eleven. That's changed since then. We'll let you cogitate on this one for awhile--and try to solve it from memory, as Angell and his colleagues did--it's a more sporting quiz that way, the treasures of Forman et fil notwithstanding.
Posted by Near-Genius Nephew at 10:09 AM