As much as we like to fulminate about triples, we've got to admit that they're not as rare as complete games. (Though, when you quantify in a particular way, it's actually a close call: triples only account for 2% of all hits, while complete games occur in just over 2% of all games.) 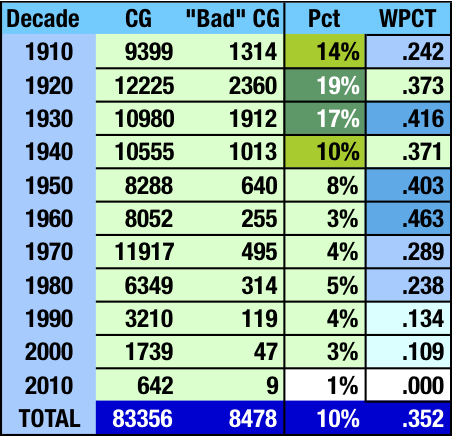 Infinitely rarer than either of these, however, is a new entity that we've recently been able to identify. Vot's dot, you ask? Why, the "bad" complete game. Once relatively plentiful, this subcutaneous cousin of the CG are now down in single digits in any given year.

Just what is a "bad" complete game? There are a number of possible definitions, but the one we settled on is as follows:

--It's a complete game in which the starter gives up five or more runs.

"Bad" complete games, as the chart at right indicates, constitute 10% of all complete games (at least the ones we can count using Forman et fils' Play Index, which takes us back to 1914). The figure is probably closer to 15% when you factor in all of the games back to 1871, where CGs were a much higher percentage of games played.

The chart tells us some other interesting things, though. First, the overall WPCT for these games is around .350, which is probably higher than what you might first think. But more intriguing is the movement of that WPCT over time, particularly how it relates to the changing percentage of "bad CGs" (relative to total CGs).

As "bad CGs" began to decline from their peak in the 1920s (and, again, there's a good chance that the peak for these might well be in the 1890s), an odd thing starts to happen: the WPCT in these games actually goes up. How is that? Well, CGs are declining over time, save for the blip we see in the 70s; as run scoring goes down in the 60s, there's less incentive to leave a pitcher in for the whole game unless his team has also scored him a bunch of runs. If such is the case (and it was...), the pitcher has a much better chance of being the winner.

As we can see, that changed dramatically and irrevocably during the 70s, when the accelerating scarcity of CGs began to randomize the process. Increasingly, pitchers with "bad" CGs were those who fell behind early, then regrouped strongly and pitched well for the latter portions of a ballgame, but took a loss due to low run support in that particular game. That became the paradigm for these games as they became scarcer and scarcer trace elements.

And as you can see, in our five-year running WPCT chart, "bad" complete games began a slide to what  might best be termed an "accursed oblivion" in 1969, when the WPCT took a spectacular nose-dive. The offensive explosion and the Rockies' home park (first Mile High Stadium, then Coors Field) pushed the WPCT upward for awhile, but the continuing emphasis on the bullpen and the increased levels of anality in counting pitches soon removed any incentive for leaving a pitcher in to face more than 35 batters. (We should note that most of what are now losing "bad CGs"--and no pitcher has won a "bad CG" since 2002--are CGs of the eight-inning variety.)

Let's take a quick look at the yearly fluctuations of "bad CGs" (in the chart at right). This gives us a more detailed look at the pattern than what the decade summary at the top provides.

When we look at that, we see that the major decline in "bad CGs" starts in the mid-to-late 30s and continues virtually unabated until the late 60s (with only a post-WWII blip to brake its fall).

The 70s then brings back both the CG (look it up at the Forman et fils pitcher encyclopedia page) and the "bad CG," which doubles in frequency around 1974 and stays around that level (with a few perturbations) for the next twenty-five years. Again, the new millennium brought us the expanded bullpen (probably not what Donald Fagen was nattering about in the blanded-out "Aja," where he almost seemed sincere while intoning that it was the "age of the expanding man...") and a disinclination to let a pitcher who'd allowed too many runs (and faced too many batters) to go so deep into a game.

Think about it. Back in the day (the mid-1920s) there was often a chance for the ticket-buying public to see not one, but two "bad CGs" in the same game. We can track that at Forman et fils, where one particular report informs us that there have been 251 such games since 1914--but not a single one since July 7, 1986, when Mike Flanagan and Frank Viola both stayed in all the way as the Minnesota Twins edged the Baltimore Orioles, 7-6. (The pattern we referred to earlier--a big inning early, followed by very efficient pitching in the latter stages of the game--is present here in Flanagan's performance.) 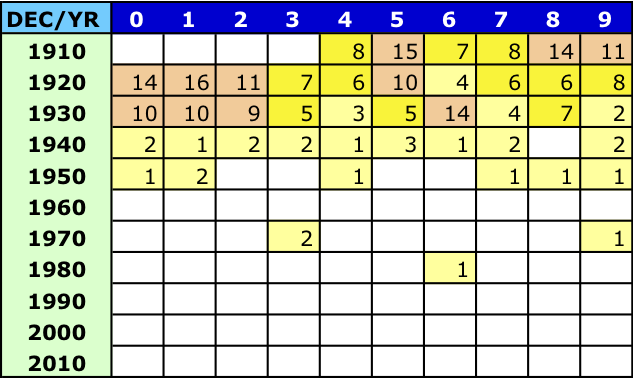 We'll come back with another post about individual pitchers and "bad CGs," but let's leave you with the "heat map" for what we might call "dueling bad CGs"--a frequency chart that shows how many of these games occurred in what year.

As we noted, the "halcyon days" for two "bad CGs" in the same game was the mid-1920s, with 1936 (an offensive boom year in the AL) being something of a "last hurrah." It's interesting, though, how many of these games show up in 1918 and 1919--years that we (rightfully) associate with the deadball era. It's likely that a good bit of what happens here is due to the elevated unearned run totals of the times, due to the greater frequency of errors.

Clearly, though, the 14716 fans in attendance at the Hubert H. Humphrey Metrodome (we like to call it the "Hump-Dome"...) had absolutely no idea that when they plunked down their dough on that summer's day in Minneapolis, they were watching what just might be the last game of its kind. While the changes in the game that have brought about this extinction are clearly warranted, it's still sad to contemplate the irrevocable loss of two starting pitchers battling it out from beginning to end, for better or worse. (In this case, mostly worse.) Somewhere where the sun is shining bright---possibly north-northwest of Mudville--there might yet be a frivolous but freighted anomaly, a throwback to the times when a team's relief corps didn't threaten to outnumber the number of men on the field.
Posted by Near-Genius Nephew at 11:58 PM