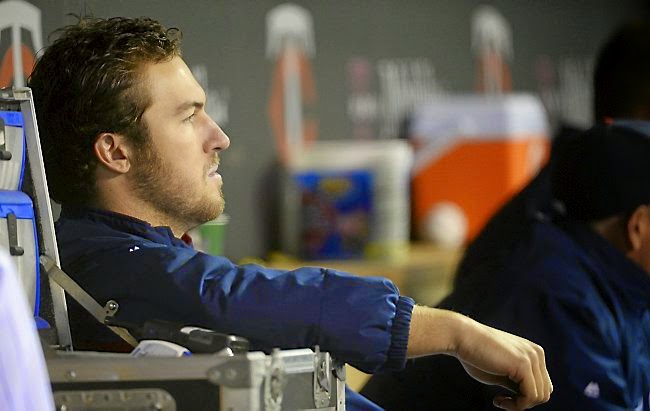 Phil Hughes, in the midst of a nice turnaround with the Minnesota Twins after a fractious career with the Yankees, allowed two runs and eight hits over 8 IP last night (6/17) in Boston, but Jon Lester and a series of Red Sox relievers limited the Twins to only four hits...final score: Red Sox 2, Twins 1.

Meanwhile, "game after" performances careened into the darker recesses of the QMAX chart with two ugly outings from Max Scherzer and Yu Darvish. Scherzer's was especially brutal, as he allowed ten runs and ten hits to the usually quiescent Royals, who've relocated their hitting shoes and are making noises in the lackluster AL Central race.

Which brings up a whimsical side issue worthy of some research: what's the worst pitching line score turned in for a game during a year in which the pitcher won the Cy Young Award? Keep your eyes open for a post about this in the near future...

Current projection for the total number of complete games in 2014 (keeping in mind that we continue to set aside Kershaw's five-inning CG): 106.


Posted by Near-Genius Nephew at 8:18 AM