More evidence below, in Ben Sakoguchi's "Banda de Hermanos Brand" painting (one of fifty-four displayed in The Baseball Reliquary's "Purpose Pitch" at the Arcadia Public Library from March 4 through April 29) that history is the bedrock element in this series.

The influence of the Latino Baseball History Project, which from its inception in 2004 opened up new and startling vistas in terms of the Southern California Mexican-American community's engagement with baseball, can be seen here (and in the next several paintings). 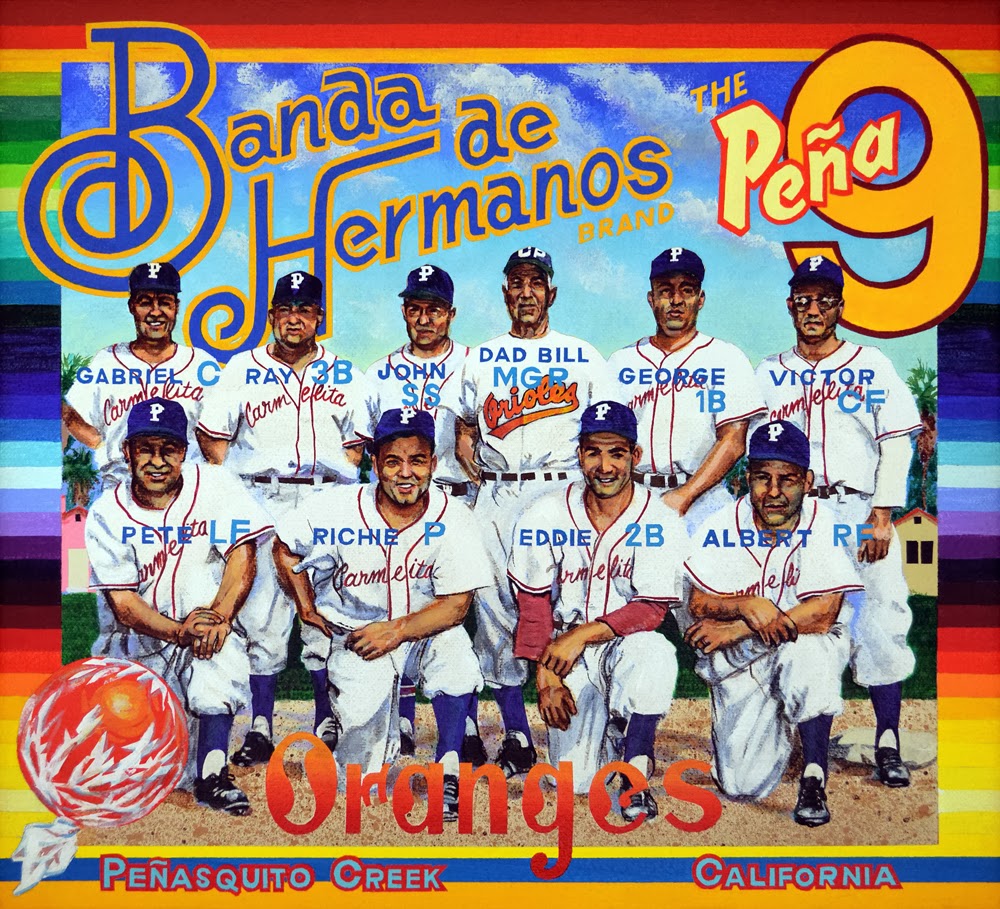 The focus here is on one exceptional Mexican-American baseball family, the Peñas, who at one time in the late 1940s were able to field an entire nine-man squad for a team called the Carmelita Chorizeros, who are sometimes referred to as the New York Yankees of East Los Angeles. (David Wharton's 2006 Los Angeles Times article about them fills in some salient details.)

Much of the backdrop for these "baseball organizing activities" came from what we might call "assimilation by exclusion." Relegated to otherness by a series of policies virtually identical to the discrimination against African-Americans, the Mexican-American community used baseball as a rallying point for their own vision of future inclusiveness within American culture.

A valuable overview of these cultural conditions can be found in Richard Santillan and Francisco E. Baldarrama's article (which also appeared in the Los Angeles SABR convention edition of The National Pastime in 2011).

The Peña Brothers ended up in Ripley's Believe It Or Not, but it was a little birdie (Buzzy the fly is on vacation this week...) that dug up the batting order information for the team when they made a special exhibition appearance in 1951:

Clearly, you don't want to mess with these guys. And Ben plays this one a bit straighter than usual, dispensing with the orange grove backdrop to more forcefully commemorate the sense of place--Fresno Park in East Los Angeles--where this singular baseball-playing family made its indelible mark.