The first two display cases in the Baseball Reliquary's "Purpose Pitch," a celebration of its symbiosis with artist Ben Sakoguchi, depict key scenes from Southern California baseball history. One third of Sakoguchi's "orange crate art" paintings selected for the show (which runs through April 29 at the Arcadia Public Library) are devoted to this theme.

Today's image begins our look at Ben's fascination with the indelible figure of baseball's integration, Jackie Robinson. A total of five paintings in the Unauthorized History of Baseball series feature Robinson, with this one reminding us of his roots in Pasadena (the home town that he happens to share with the Reliquary). 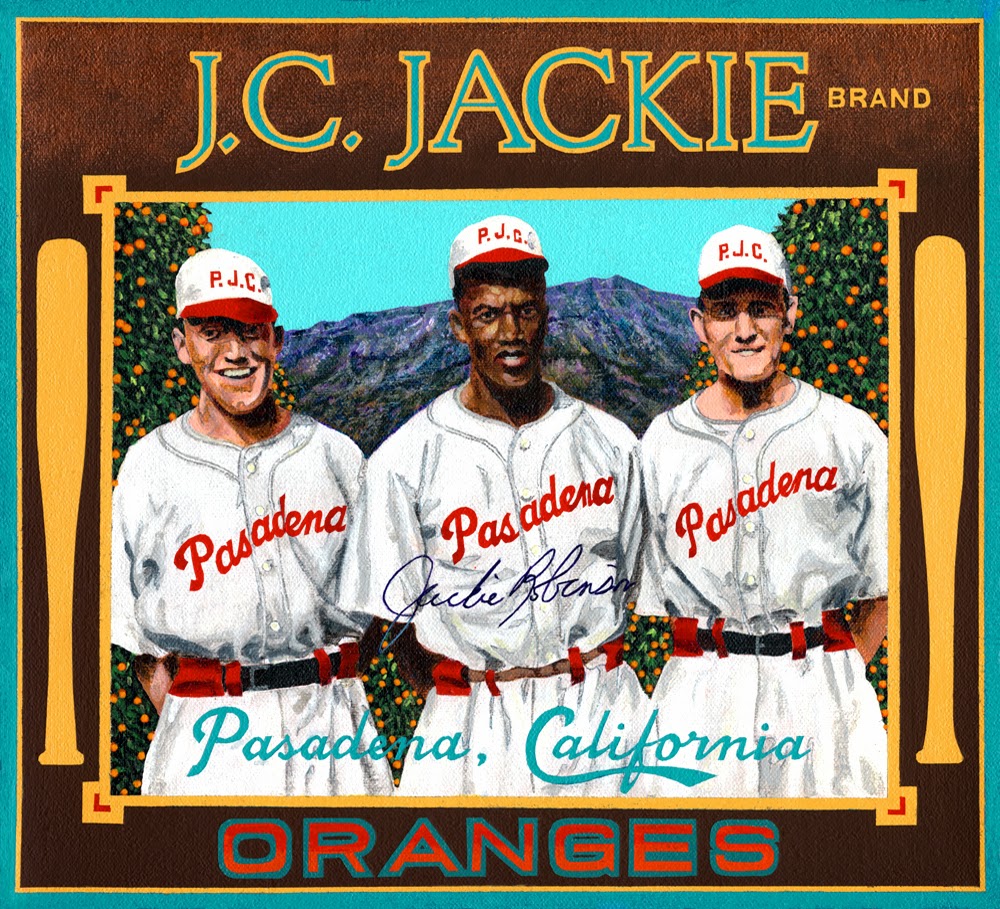 It depicts Jackie during his days at Pasadena Junior College (1937-39), as he continued his string of athletic accomplishments after reaching local prominence while attending Muir High School. As is often the case, Ben appropriates a portion of a team photo and gives it the requisite "orange crate" spin.

We should take this moment to remind you that Jackie was a shortstop at this time, a position he continued to play until 1946, when during his first spring training with the Dodgers he was shifted to second base.

Jackie would go on to UCLA in 1939, where he would become the school's first athlete to earn varsity letter in four sports (baseball, football, basketball and track). As we know, this would not be the last "first" for him as he moved inexorably toward a celebrated place in history.

Ben's image here is somewhat more unadorned that is often the case, a kind of "enforced primitivism" that lends the image an unusual immediacy. Though we see no instance of animosity or tension between the races here (the two white players flanking Jackie seem relaxed and accepting), Ben has retained the shadows found in the original snapshot that extend over the faces of the white players even though there is no light source similar to that which causes the shadows in the photo.
Posted by Near-Genius Nephew at 1:12 PM