It is not yet spring in New York, as we can attest from personal experience; our schlepping all over Manhattan during the past two days has indicated that the calendar can often be misleading.

Meanwhile, we reach the last item in Display Case #2, one where the Baseball Reliquary's Terry Cannon has selected one of the  more celebrated events in Giants-Dodgers lore (and one with a suitable twist ending). It's exactly the type of story that would appeal to Ben Sakoguchi. 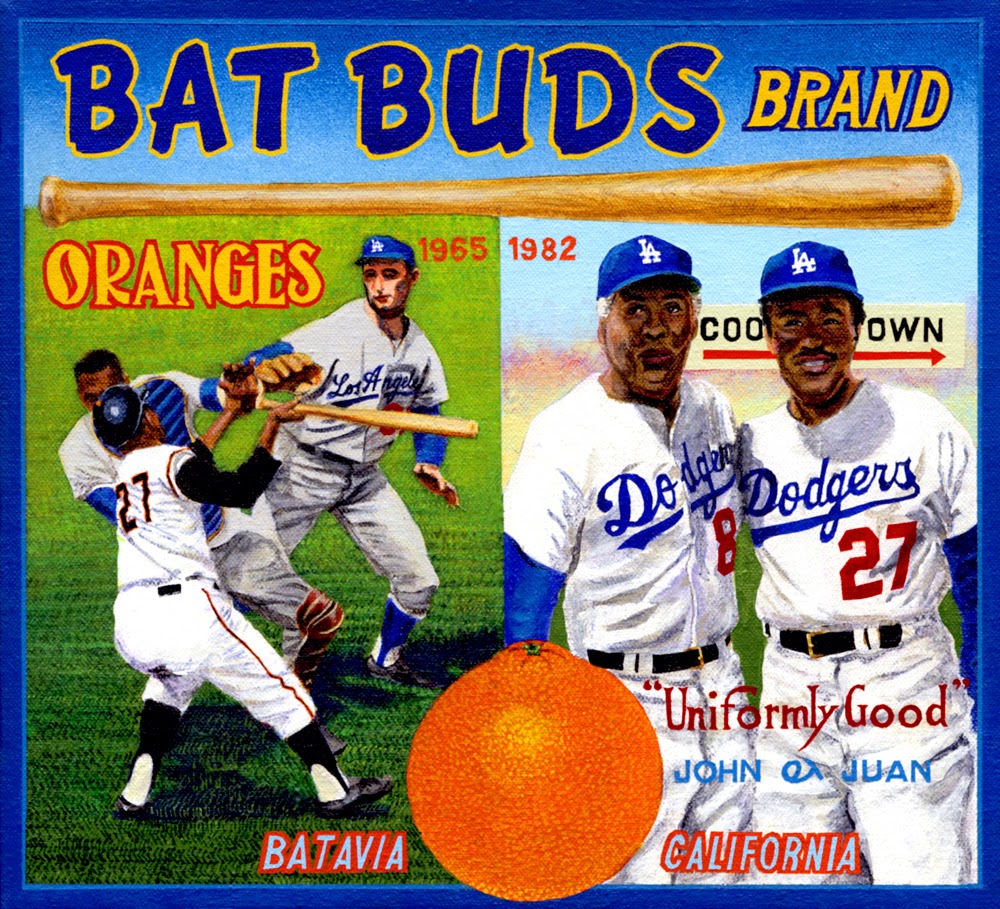 Bat Buds Brand commemorates August 22, 1965, a date that will live in...well, if not infamy, then something akin to eye-twitching bafflement. It was the day that San Francisco ace Juan Marichal precipitated one of the great donnybrooks in Giants-Dodgers history by attacking Los Angeles' veteran catcher John Roseboro.

What made this different was that instead of using his fists, Marichal used his bat to brain Roseboro.

While Marichal opened up several cuts on the top of Roseboro's head, the actual crime was assault and battery (no pun intended), not attempted murder.

The bewildered look on Sandy Koufax's face (it was a matchup of the two top teams' two top aces, something that almost never happens anymore) was no affectation.

When the dust settled, the Giants were able to take advantage of the fact that Koufax had pretty much seen the inside right half of the plate taken from him. The umpires were not in a forgiving mood, having witnessed a fifteen-minute donnybrook. Koufax suggested in his autobiography that this was one of the key reasons why he surrendered what proved to be the winning home run, a three-run shot by Willie Mays in the 3rd. The Giants went on to win the game, 4-3.

Marichal was suspended for nine games, which may have been enough to cost the Giants their shot at the pennant. He missed two starts; the Giants finished two games out.

The twist to the story--and one that clearly appeals to Ben Sakoguchi--is that some years after the "bean-bat" incident, Marichal and Roseboro  were reacquainted--and wound up becoming close friends.

It's like the Maltese Falcon--the stuff that dreams are made of. We'd call it "Damon Runyon on steroids," but we suspect that you'd get the wrong idea.

At any rate, Ben celebrates the art of healing and the inspiration that comes from the most improbable turn of events.
Posted by Near-Genius Nephew at 8:53 PM