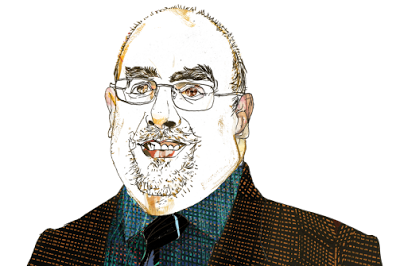 I know...you're going to say: "Jeez, Malcolm, it's Christmas already...just lay off. Have some egg nog. Spike it. Hug that toilet--don't jump into it...again."

And you're right. I mean, who really cares that Joe P., Bill James' raccoon-faced shill, is at it again?

Actually, we all should care.

Joe's recent column, "Youth Will Be Served," serves up watered-down concepts from the Godfather of sabermetrics, and chases that H2O-weakened drink with his usual brazen pusillanimity (and, yes, folks, that is a major-league oxymoron we just trotted out there for you...) while groping toward the type of wish fulfillment that can only come from those who've baked too long in the environs of Royals Stadium.

Joe has mastered the worst aspects of James' practice, and turned it into a parody of the type of analysis that used to be cutting edge, but that's now descending into a crevice of creeping nostalgia.

When James used to pick galvanizing examples for jejune readers back in the 80s, and could graft what surely looked like  a full toupee's worth of evidence to the most oblong-shaped scalp of the mental skinheads reading him, he was genuinely breaking ground. But when Joe tries to do the same thing in 2013, he looks like a guy who has woven a basket around his own dome.

We are, or ought to be, past the point when a two-on-two comparison, cherry-picked for effect, as is the case with Joe's attempt to bring down the house with his young (Staub-Wynn) vs. old (Mays-Mantle) comparison, can stand as evidence.

Cherry-picked? You bet. Joe takes away a year from Mantle by carefully removing his last truly great season (1964) in order to make the WAR numbers work out.

Mantle should be playing in his age-32 season and Mays in his age-33 season in order to match the ages of the two present-day players (Josh Hamilton and Albert Pujols) being used in the comparison.

That means that we should be using 1964 as the starting point for them, instead of the false parallelism of 1965-69 that Joe wants to use.

But when you use 1964, which is the proper year for comparison, Mays and Mantle wind up blowing away Staub and Wynn by about 10 Wins Above Replacement (55.9 vs. 46.6).

It's a real shame that Joe has to stoop to such sleight-of-hand, because the central point he's making is unassailable--and it's been well-known, as noted, for three decades. For Crissakes, Bill was talking about these concepts in his self-published books from the late 70s.

But we are again in an age where the nuances of the past have become the sledgehammers of the present. The uncritical application of Bill's findings about the general placement of peak years and aging patterns has produced a great deal of folly within the little world of sabermetrics over the years--in particular, the notion that teams who simply turn over as much playing time as possible to young players will achieve outsized success.

That idea, in its most extreme manifestation, rose and fell with the 1998-2002 Florida Marlins, whose extreme deployment of players age 25 and under failed to produce a series of post-season appearances for the citizens of Miami or the grand, Teflon-coated prophets at Baseball Prospectus.

"Now, now. Let's be fair...Joe isn't advocating that." Oh, no? He says that if he takes the kids he will win more than if he takes veteran players. These are not facts in evidence from past data.

And by pinning the argument squarely on Eric Hosmer and Salvador Perez, he's clearly in the thrall of the continuing situation vis-a-vis the Royals (his home team). Of course, he's not alone--there is a sizeable knotty-browed "mafia" that's coalesced around this fallen franchise, and they are currently reaching a kind of agitato of anticipation that is featuring the same fervid morbidity and recursive rhetoric that evidenced itself with the fin de siecle Marlins (who, ironically, promptly won a World Series once they were formally written off).

It's a crying shame that this point, which has much more to it--and much more to teach us if we would only follow the evidence with more patience and discipline--has been reduced to a mere sound bite. As with so much of what has come out of the field in the past fifteen years, it is shot through with the not-so-subtle bias of the consultancy culture and the entrepreneurial skewing that has afflicted so-called "insider analysis."

We'll come back tomorrow with a series of charts that will take up a good bit more of this ideology disguised as evidence, with data that will recast the argument in surprising ways.
Posted by Near-Genius Nephew at 11:58 PM